Our weekly devlog detailing the new hunting system and the revamped menu used to give orders to your ships. 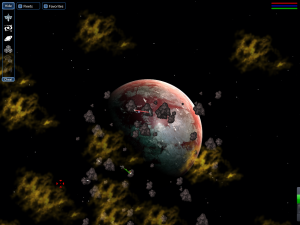 I added a hunting mechanism to the game. When a game starts, a few locations will be selected to spawn small space creatures living in asteroid fields. When killed, they will drop a loot, used by some factories to produce wares that can be traded or used. Right now the creatures are harmless, and it's only to produce some space rations. But the interesting part is that, in the game, everything that can be built or used is a trade item. So more dangerous creatures (like The Swarm) could very well be used to drop something necessary to the making of specific weapons, shields, or even ships.

As usual with this kind of system, I can enable / disable on a ship or faction basis. So, as a player, you can give this command to any of your ships, it'll hunt and sell the loot for you automatically. If you are a faction, some, proportional to the size of both the total map and your territory will spawn for free. I could turn it into a trait too. Those ships count, like miners, scavengers or bounty hunters, as civilian ships. Civilians bring less income than automated ships, as the pilot keep his share. But, on the other hand, they can hire escort ships and pay for upgrades, while your drones won't. 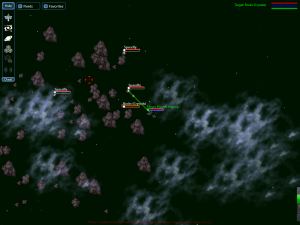 Right now, in the in-house version, those ships do bring money, less than miners, given the current rate, but as I said, with bigger creatures, better loot. They tend to be picked upon by pirate raiders, given they are small ships (fighters and frigates). It's map dependent too, they have a harder time if both pirate bases and rock belts are outside solar systems.

From an economic standpoint it's a new mechanic added to the trade and production system. We have time based (solar plants), mining, factory refining, scavenging, bounty hunting and now hunting. It's also extremely easy to change how factions favor some systems over others, or, to give specific factions "job -> loot -> factory -> cool useful stuff" economic chains.

Of course, later on, hunting missions will be added. 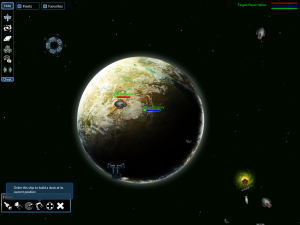 Also, as suggested last week, I replaced the ugly menu only accessible through ctrl + click used to give orders to only one ship by something better. Select some of you ships, a button bar will appear, as demonstrated on the screenshot, and be used to give them orders like move, protect, attack, attack/move, get repairs and build. I added relevant help tooltips too. The button bar works at any zoom level, you can use it to order ships around the galactic map with ease.

I replaced the default mouse cursor by a more appropriate one. I can change it depending on the context. It's underused at the moment, but, as usual, it will be improved upon.

While at it, let's talk a bit about what features are still missing: the way factions expand into unclaimed territory must be rewritten with something akin to the culture system used in Civilization. I still have to review, setup and add a bunch of sound effects (grumbl grumbl). And the player can't really transition from pilot to empire ruler. Here again, it will be crudely implemented but it should be ready for the beta. The procedural map generator won't be available for a while longer, though. That's not something I want to rush, and there isn't enough time left before the release date.

As the first beta version, it will be basically feature complete. But understand that by "feature complete" I mean that all systems are implemented at least in their basic form. The process of improving each one of them will begin. Next beta versions will be thematic. Input is appreciated during the beta process, forums and threads will be updated accordingly.