Posted by AnarkisGaming on Nov 2nd, 2014 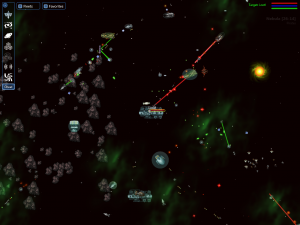 This update is going to be a bit shorter than usual as a the main addition can be summed in two word: Sound Effects ! Yes, the game can support sounds now. As a result a fair bit of the week has been spent locating decent public domain sound effects for weapons, explosions and such. But no worries, there’s also quite a few other interesting additions that will be explained in this article.


While I am not exactly happy with how the sound effects are currently handled code-wise and that the library I am using is pretty bare-bone, it’s at least easy to use and not too memory or processor hungry. If I can find time to do so I will replace it with something beefier during the beta phase.

From a technical perspective, I am not going to play all sounds from all ships in a battle, because even if it was technically possible (which is not), with some battle ranging in the hundreds of ships it would be a mess. Usually what will be played are the sound produced by the player-ship (or whatever ship the camera is centered on). That encompass the engine, weapons, hit sounds from your weapons on 3rd parties and explosions you create. Additionally, if there is still room for more sounds, they will be ranged by distance from the camera, and in this case explosions are played in priority. Sounds located farther than an arbitrary distance won’t be played.

At least that’s the general logic, not sure how it will play out in practice, I still have to experiment a bit. 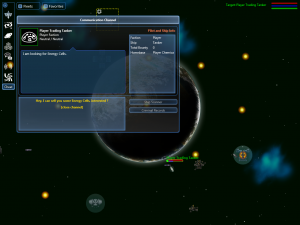 I added two interactions to the comm channel. It is now possible to ask pirate ships the location of the nearest pirate base, which can be useful with the new option to hide unexplored sectors. The other option is added to trading vessels. If you ask a ship what it’s doing and it respond that it is looking for wares that happen to be in your cargo bay, you’ll be offered the option to sell them directly. As usual, more options will be added and existing ones will be fleshed out during beta. Note the menu itself badly need a redesign that is likely to happen next week or so. 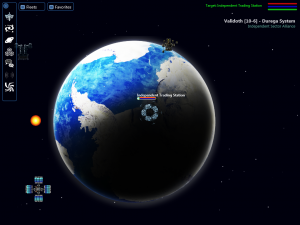 When you open the galactic map, it is now centered on your current sector, same goes when using your jump-drive. It is also possible to jump directly from the galactic map with the [J]ump key which I made a toggle (pressing it a second time disable the jump overlay).

More importantly, I made solar systems a bit more tangible. Sectors belonging to a solar system will display this information next to their name as shown in the screenshot. I updated several menus accordingly. Right now, it’s only a cosmetic change (it has just been added today), but it will be used to make police and military activities system based instead of being sector based. It means that the police won’t stop chasing offenders the second they leave a sector. Instead, they will chase until he leaves the system. It also open paths for me to add more customization options when starting a new game (random starting locations, randomized star systems, and so on).


On the diplomacy front, I added the option to request a tribute from other factions (granted you play as an empire). And made the ground work so a “non aggression pact” treaty can be added as well next week, I just still need to make the AI understand how to use it properly.

Graphic wise, I added a few new nebulae and planets to add some variety, the asteroids are also much bigger and a bit sharper, and I replaced the Sirak white cargo ship by something consistent with their usual dark tone.

I also further optimized the code, and while at it fixed a few minor bugs, including the bad habit of ships to switch between two rotation angles every frame or so. Nothing major, but to be honest, I don’t seem to find that many major bugs anymore

There’s a lot of work being done on the game editors (that will be given, amongst other goodies, to the people who made a donation), especially on the map editor. I will publish a dedicated article regarding those tools soon. Also, editing the existing maps to manually set the solar system of each sector took quite a bit of time. There’s also a lot of balancing/addition of ships, docks, equipments and wares, but it’s hard to report on those accurately as they change daily (not mentioning it’s pretty boring).

With the alpha cycle ending very soon, devlogs are likely to be a bit shorter than the previous ones. I am basically plugging the various holes in the UI and gameplay so it can be released feature complete with no outstanding bugs or issue. Once it’s out, I will resume the improvement of those features.