Our weekly development log discussing the new solar systems and the multiple improvements to the user interface. Also included, a probable release date for our first Beta version. 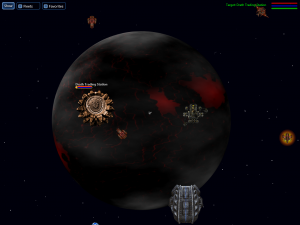 First of all, good news !

The Beta version should be released in roughly 2 weeks. Needless to say, it will be quite a major improvement over the current alpha with much more things to do, an better user interface, and lots of improvements across the board.

The integration of solar systems in the game's engine is finished leading to nice names for our sectors and more importantly a police force that won't be fooled by your ship going in and out of their home-sector. I also improved many parts of the user interface (log, communications and world map mostly), and reviewed the ship setup menu so you can give roles to the ships you buy in a less confusing manner. There's also many minor improvements and fixes. 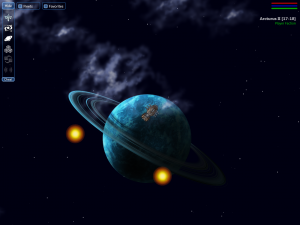 As explained, solar systems are a real entity in the game's engine now. While it's not yet used to its full potential, you'll see the first effects in the beta version:

Firstly, sectors belonging to a star system are named accordingly with names like Sigma Draconis Nebula, Capella IV (for planets), or Antares Ore Belt. Hopefully it will be more immersive than the previous naming convention. Secondly, police forces and some other security type ships are likely to chase hostiles across the whole solar system, making piracy a bit more dangerous and reducing the effectiveness of hopping in and out of a sector to confuse the Police AI.

While it's beyond the scope of the next release, solar systems offer new opportunities both from a gameplay and a world simulation perspective. Local laws / modifiers could be put in place in those systems. Local trading ships (not belonging to any dock) could be added as well. 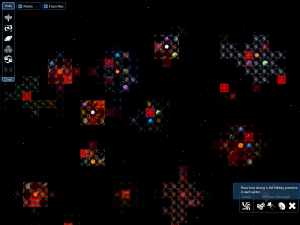 As promised, some filters have been added: It's now possible to get information about the asteroids, relations and military presence directly on the map with the push of a button. While at it, I also moved the Jump button there. I also added (optional) tooltips to tell what each button does. I will probably add some more buttons and filters on this screen as the need arise, but the general design should stay the same. 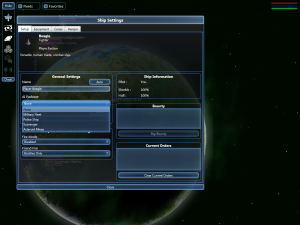 The previous menu was fairly confusing with a "role" drop-down menu that was mostly cosmetic and a different check-box to put something into the military. Well, not anymore ! Both have been replace by a single drop-down menu which let you give a role to said ship. Right now you can choose between

Once a role is chosen, the ship will act automatically without input. Of course, additional roles will be added during the development. 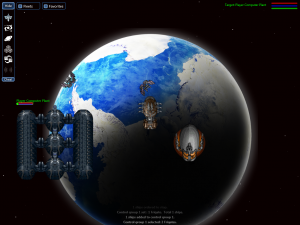 The main menu bar had a slight redesign. The jump button has been moved to the galactic map, and the comms/trade button is now a contextual "use" button (its icon changes according to the context). If a station is selected, you'll open the trade menu. If it's a ship, the comms will open. If it's a warp-gate, the jump screen will open. If it's a loot drop, you'll get the loot menu. You get the idea :)

The log at the bottom of the screen has been improved as well. It will display the last 4 messages, instead of only one previously. It handles colors too. Now, I can make important events more noticeable (bad events are in red, good stuff is in green).

The last thing I am not happy with is the individual ship order menu. It's ugly and hard to use correctly. Given there's not that many commands needed, I will probably display a row of buttons (similar to the one on the galactic map) when a player owned ship is selected. I will experiment this week and look at what have been done in other games as well. 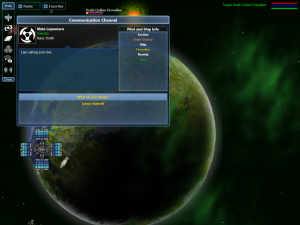 The communication channel menu had a slight redesign, and more importantly pilots get real names. Humans have a random combination of first + last name, while Siraks and Draths uses basic name generators using phonetics. The result for the last two isn't really great, but it's good enough for something that's secondary.

I also replaced some of the ugliest factories and docks with much nicer sprites, added a few ships, rewrote some descriptions. This kind of stuff.

Regarding bug and behavior fixes, I modified some of the Ship AI so they don't simply stop moving while in space as it was looking weird. It basically means that fleeing ships won't stand still when out of range of their pursuer, or that police ships won't camp pirate bases waiting for a docked pirate to go out anymore. There's a few more, but that's mostly bugs that have been added after the last release.