A devlog mostly about the much improved ship to ship combat. It also features new additions and fixes to the user interface. 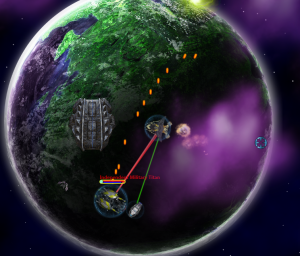 First of all, a big thank you to the fine folks at the Bay12 (Dwarf Fortress) forums ! Your help has been invaluable. If you want a pick at the Unending Galaxy’s topic it’s here.

Anyway, as we are slowly but surely closing in on the final release, I have been reviewing each feature one by one in order to make it whole. There’s still a lot of ground to cover but we’re getting there. I also improved how ships act in battle in quite a major way. Next beta should be available in roughly 2 weeks, barring any IRL issues. 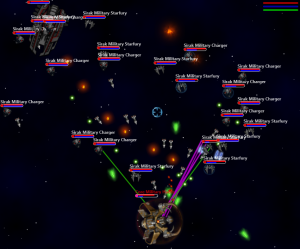 Yes, all those Sirak fighters come from the same carrier

First order of business was to improve ship flying patterns so they don’t fly straight at their target in a conga line / big ball that can easily be wiped out by area of effect weaponry. I initially thought it would be a difficult and CPU heavy task, but as I always thought, there’s no problem worth solving that can’t be solved by a clever use of a random number generator. As such, the drunk pilot flying AI ™ was born :)

Let me explain, beforehand ships would all chase their target the same way, by tracking their exact position and trajectory. It was simple and fast, but it had a tendency to make the attackers fly in a convenient line/ball for the defender to shoot at.

Now, instead of chasing the target itself, each individual attacker will periodically pick a random point in a circle with a radius equal to 2/3 of the distance between him and the target. And said point will be reset every few seconds. With this method, all attackers will pick different points to chase that will become closer and closer to the true position of the target as they approach. There’s a few additional variations to keep things interesting, but that’s the gist of it. Additionally, fighter ships won’t halt if their target halt anymore, instead they’ll fly over and around the target like mosquitoes.

A nice side effect of this new mechanism is that ships are much better at avoiding sectors borders and are much less likely of being cornered, it can still happen, but that’s way rarer.

And last, but not least, weapon systems will determine the target’s trajectory and fire accordingly. In other words, the cheap technique of circling around a bullet firing enemy to avoid 100% of the damage is no more, you will have to zigzag and show some actual piloting skills.

There’s still one major thing missing from combat to call it a day, weapon energy consumption. As you may have noticed, no matter what gun you equip, you never run out of juice. That was more or less intended to see if I could get rid of energy management all together, but in the end I think I will keep it and give tough energy requirements on some of the bigger guns. It will also be a convenient way to balance them properly.

Oh, I nearly forgot, friendly fire settings works for stations too now, and ships won’t go berserk if you hit them by accident as long as they still have 85% of their shield left. 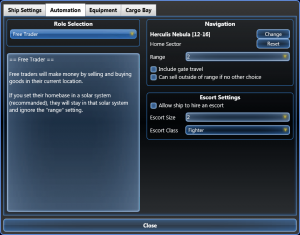 So, as you should know by now, UG gameplay relies heavily on automated ships. The recent addition of the free trader AI is a prime example of that. Still, it was a bit weird that such an important part of the game was relegated to a small drop-down list in the ship setup menu.

Well, no more ! As shown in the screenshot, AI packages now have their own configurable tab with context help. Don’t mind the current help text in the screenshot, it’s going to be a bit more informative than that. As you can see, you can set exactly where the ship will do its business and if the area includes gate travel or not. You can also tell your AI ships to hire escort ships and even choose a class for said escort ships (cruiser max). If you have a shipyard, escort ships will be built there for their usual cost in ship parts. And, if you don’t, they’ll be hired for a fixed cost (that have yet to be determined exactly).

It’s likely that more (AI specific) options will be gradually added to this menu once I overcome a few hurdles that are in the way. 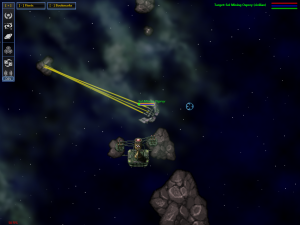 If you’ve played with UG and reached the point where you have your own territory, you likely noticed that your faction generates civilian ships over which you’re supposed to have very little influence. However, the user interface was a bit confusing in that regard as you could still give them orders and as they were hard to distinguish from your own fleet.

It’s fixed. From now on, you won’t be able to order them around, they can’t be added to fleets, the “select all” shortcut ignores them completely, and so on, you get the idea. They are also clearly indicated as their name is displayed in Italic when selected on screen and the “civilian” mention is added when you target them or open their ship setup panel. 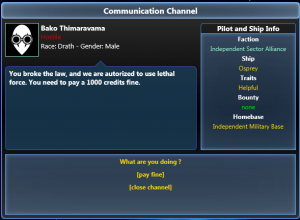 That was a very buggy one, indeed. Basically all the options to make peace with angry ships were not working as well as they should have. Here again, it’s now fixed. Pirate raiders, captains and bosses will accept your tribute, and it will make your ship immune from further pirate raids for a few minutes. In a similar fashion, paying a fine to a police ship will pacify all police ships in the sector. It is also possible to pacify cargo ships you’ve targeted by mistake (without cost).

You still can’t pacify military or bounty hunter through talk, and you never will. If a military ship is angry with you, flee the sector, it’s usually enough for them to forget all about you. 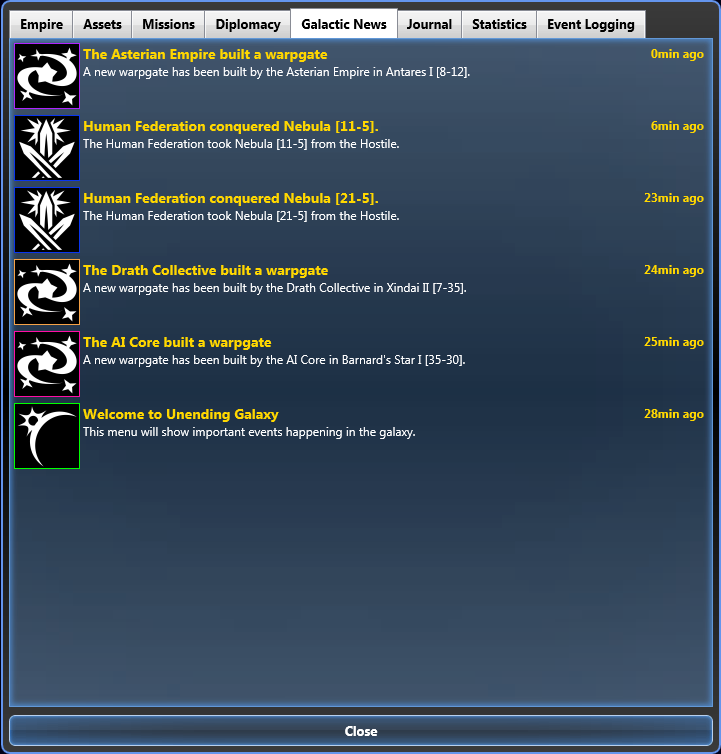 There’s plenty of small changes and improvements. The galactic news and journal entries have a time-stamp now. In the Empire Manager, you can force the game to pause when one of your ship or station get attacked or destroyed. I added a lot of options to the new game menu. I also added a random title screen generator for the hell of it.

More importantly, double clicking a mission in your mission list will center the galactic map on your target, making bounty hunting and pirate missions much easier to complete.

You can also manually build warp-gates, so you don’t have to enable the build manager just to do that.

I also fixed a bunch of small to big annoyances and bugs. Renaming a ship or equipment preset no longer clashes with keyboard shortcuts for instance. The halt button and the shortcut key now behave the same way and will stop a ship from shooting at their current target if any.

As usual, the full changelog can be found on the forum.