New devlog entry for Shardpunk, with a field report on my latest approach to weapon upgrades.

Woah, so I'm after the first two live streams already! If you haven't watched them yet you can see them at Retrovibe's Twitch channel.

The game development is progressing smoothly. I still need to finalize some in-game features (that's why the game is still in alpha mode), and one of these is weapon upgrades.

Now, I've iterated on the weapons' feature at least two times, and I was not totally happy about it so far. 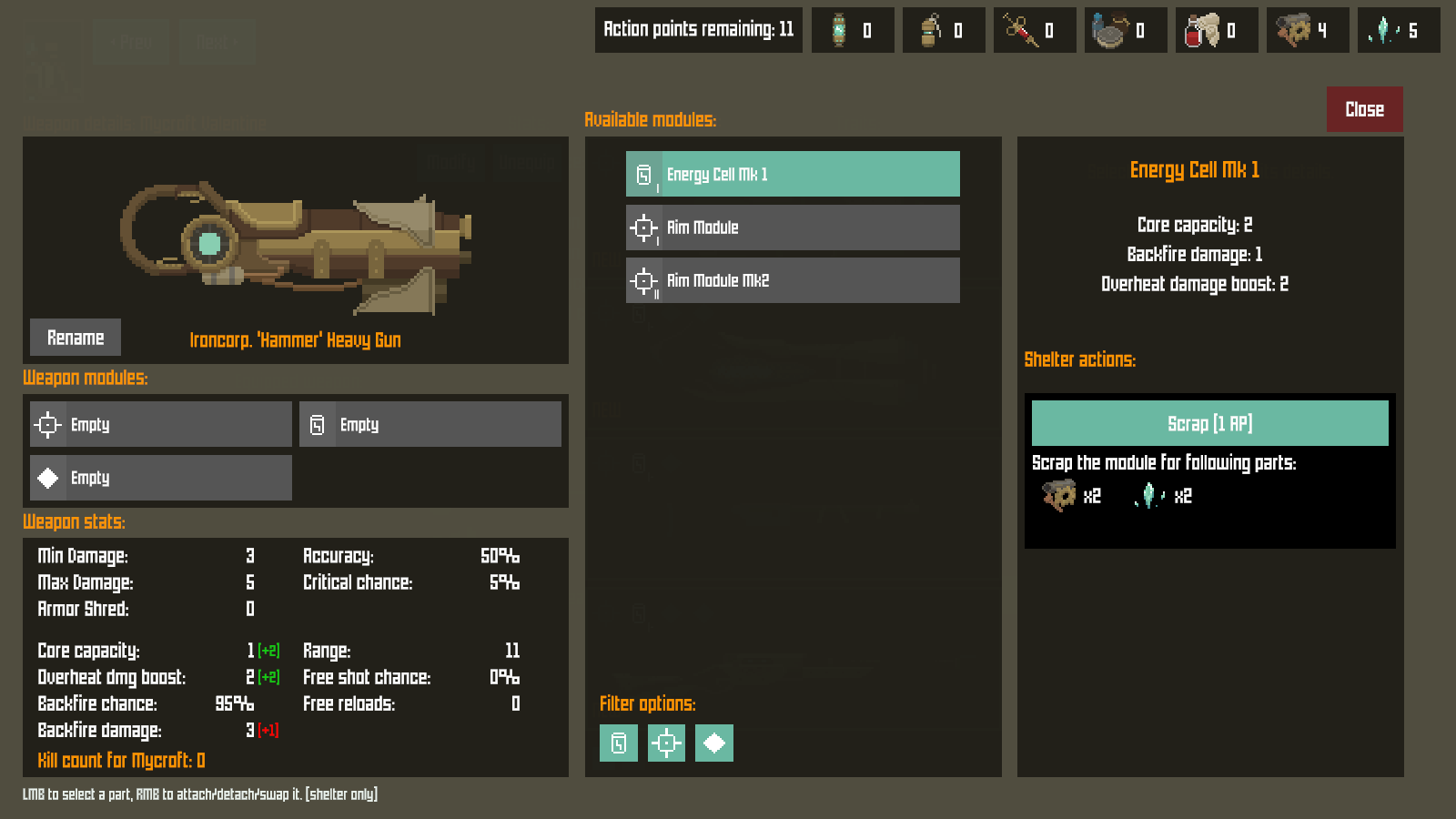 Now, the above screenshot is a good depiction of my anxiety about that approach. It was too busy for me and had one thing that I did not like: clicking some buttons was using shelter action points. So basically the player was spending action points from the same pool in two different places: the main shelter screen and the character weapon details screen.

This is the only screen I wanted the player to spend shelter action points in.

So in terms of game rules that stuff was consistent. The problem was that UI started to be off.

Then I watched a YouTube video (couldn't remember the link, sorry) about UI design, telling how it is important to recognize UI elements that seem not to fit the rest of the game.

So I went back to the drawing board with this one. I wanted the player to have the possibility to upgrade character weapons, but without the whole unnecessary action points juggling thing with scrapping/upgrading weapons and weapon part.

And here's the current take on it:

Instead of having many weapons of each type available to characters, and a number of interchangeable weapon add-ons, every character has their own, one-and-only, unique weapon throughout the game.

Every weapon is upgradeable by using a new resource, called for now “Weapon Upgrade Tokens”, or “Upgrade Tokens”/”Tokens” in short. These do sound like temporary names, doesn't it? I guess "weapon parts" would be a better name.

These upgrade tokens can be found in special loot crates during combat (previously, weapons/weapon parts were found there)

Every weapon has a number of slots that can be filled with different upgrade types. Here are some WIP, icon-less screenshots: 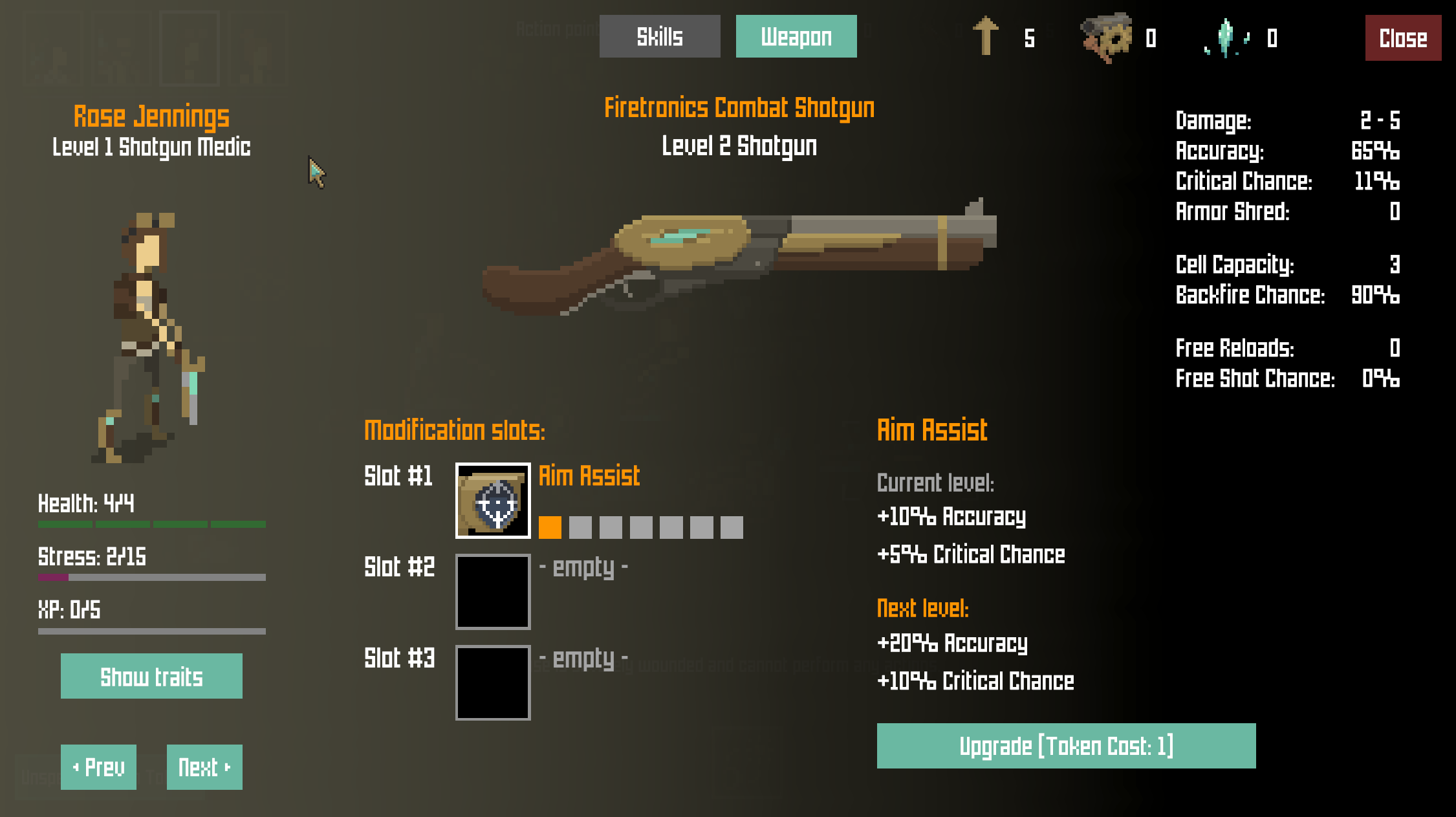 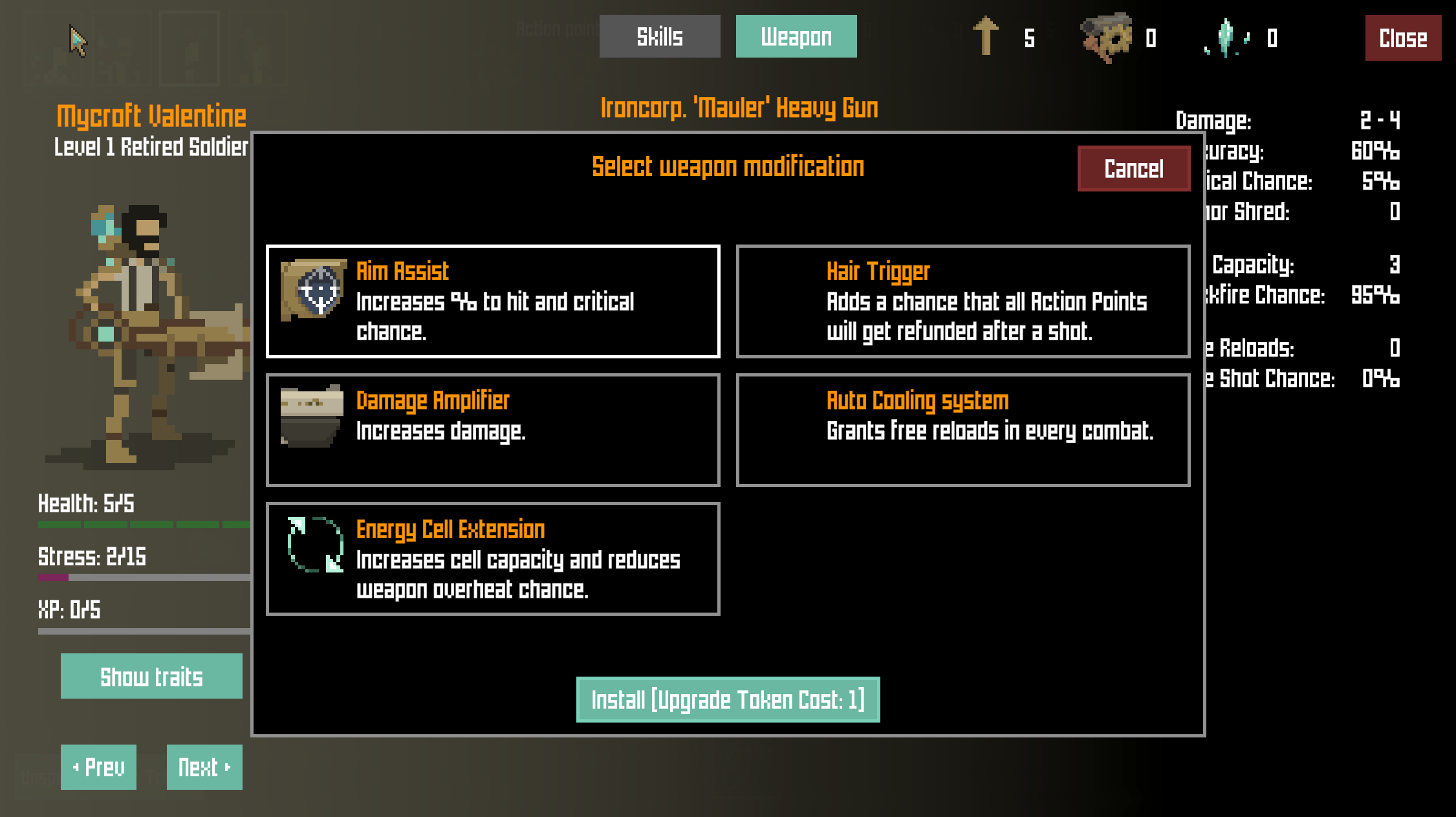 This approach will allow me to maintain the general idea of upgradeable, moddable weapons. And it resolves a lot of issues:

- scrapping weapons is now unnecessary, as characters are not able to find "better" weapons - they will be able to upgrade/customize the ones they use. This simplified the game a lot. Previously the player had the ability to scrap an old weapon, or to switch weapons of the same type between characters. This means that there might be situations in which one of the characters was without any weapon. The game had to prevent the player from scrapping weapons in some cases (to avoid having weaponless characters) and it had to be explained in the UI.

- weapon energy cells (so the part responsible for ammo capacity) could be unmounted and/or scrapped, which could result in a weapon with no ability to shoot if the player was not paying attention. Such dead-end situations are something that one should avoid in game design.

- the only place where action points are spent is the main shelter view. Upgrading a weapon does not cost action points, and it makes sense.

So yeah, I'm still tweaking that part to make it more fun. And if you'd like to ask me some questions about the game design (or any other question), do grab me on my weekly Monday streams.