In this article I'm sharing my huge 12 months progress and details of gameplay/storyline evolution for my pandemic inspired game. I'm showing you all my progress and Making Of's for the game and telling you how this development has changed my life forever.

Hello everyone! The updates are back and today I'm finally going to tell you more details about the gameplay.

Well, many things. Updates on the game's Instagram were released much more often since I didn't have much time to write huge posts like I always do here. However, now it's time.

So, the first thing first, we has been working on a brand new gameplay and experience. This job is still in progress by my programmer Kris Kirov, meanwhile I'm trying to finish my location at a basic level so it could be called working "pre-Beta".

I re-imagined some of the location parts, created quite realistic VFX, some brand new models, corridors... But that's a story for another post and update.

Gameplay. How it all started?

The gameplay concept development started right with the game itself. When I just started developing this game, I was thinking about creating anything simple related to COVID and easy to make. The gameplay were a starting point, so location and level design been designed after the concept was done.

Initially, Epidemic Tracer supposed to be something like a first person scripted quarantine simulator. An unknown character were getting opportunity to manipulate time and change some aspects of the past. A goal of the game supposed to be to find and stop a guy who tried to escape quarantine area by changing the past there. 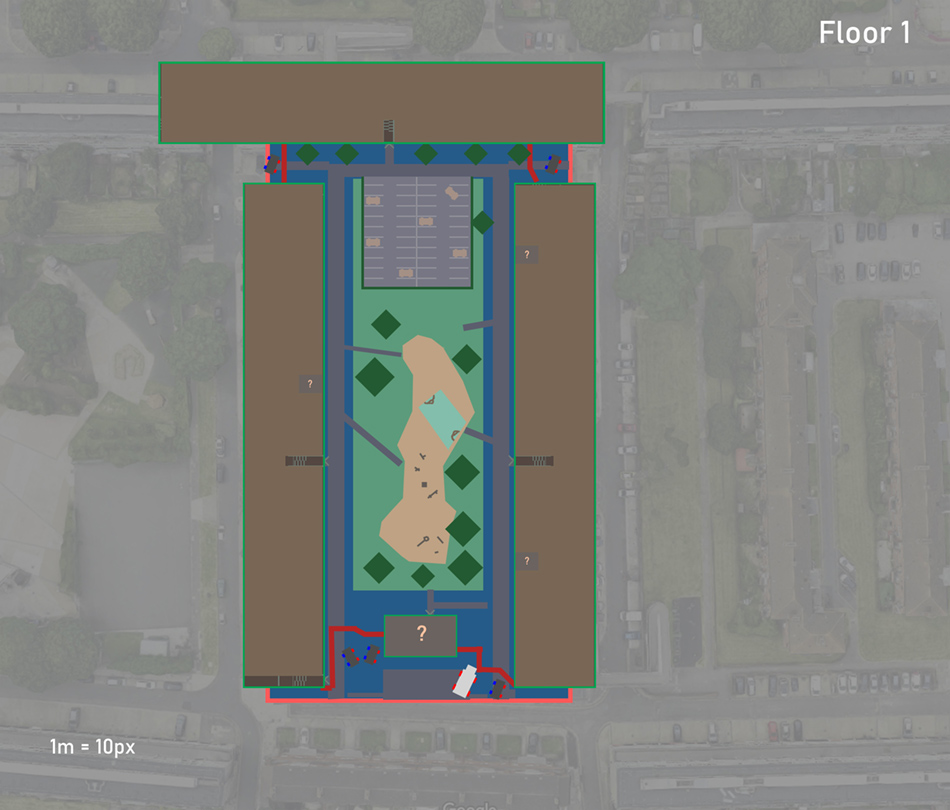 Such "people of the past" were supposed to be a scripted primitive objects flying on rails (spline based system). At that moment I already found the Kris and he made me such system just within like 4-7 days, but...

We missed a very crucial aspect, so we started to rebuild the whole game again...

What is this game about?

The game became much harder in all aspects than I thought, and 2-4 week game turned out into... 1+ YEAR GAME! That became obvious, that in about 3 months I realized, that it's a bad idea to develop a simple game for so long... So I started to turn this concept into my first and last DREAM GAME!

I changed quite much the level of details of my location, I added a lot of gameplay tools, but most importantly (!) I radically changed the storyline basis, so the game has much more background than ever before! And instead of unrealistic abstract story, this story (spoiler!) will be quite personal and realistic (related to COVID consequences as well). I'm really excited to talk you more about it, but that's a topic for next article.

This time, let me tell you what is my game about in brief. 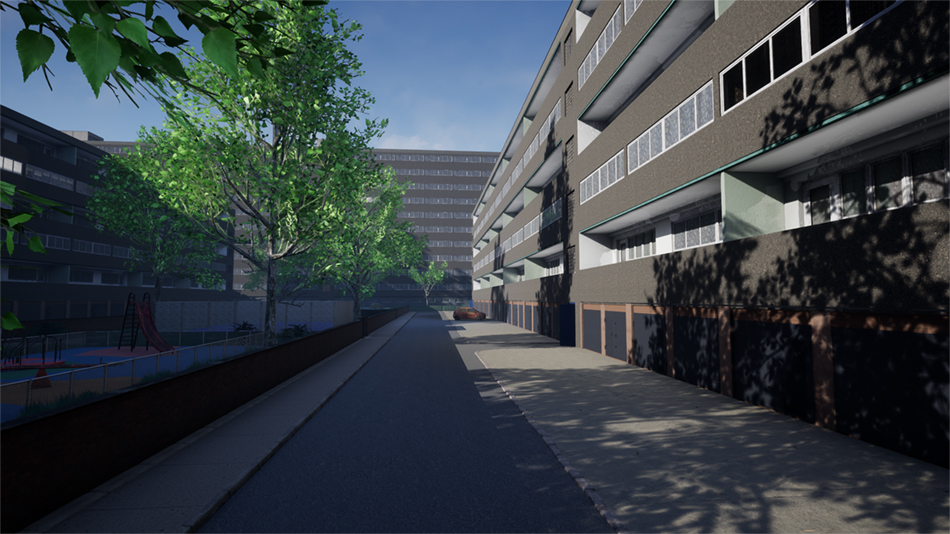 You're playing as a special explorer of the very first quarantine zone, located in imaginary European city called Clotho. Your name is Viktor and you was a citizen of this quarantined living complex before the new greatest pandemic (which wiped out over half of the Earth population). That quarantine zone is now abondoned as well as Clotho, but... During the new pandemic crisis, humanity get chance to develop a very special device - a time glove.

This time glove will let players see the world in kind of 4D, meaning that people of the past will be like silent ghosts there. Player will get opportunity to look at the first (real) ~hour of the quarantine, which he/she could rewind backward and forward, and most importantly - players will get opportunity to interact with some objects and change the events of the past! That way player will get a chance to simulate many options of the quarantine in order to find the best one. 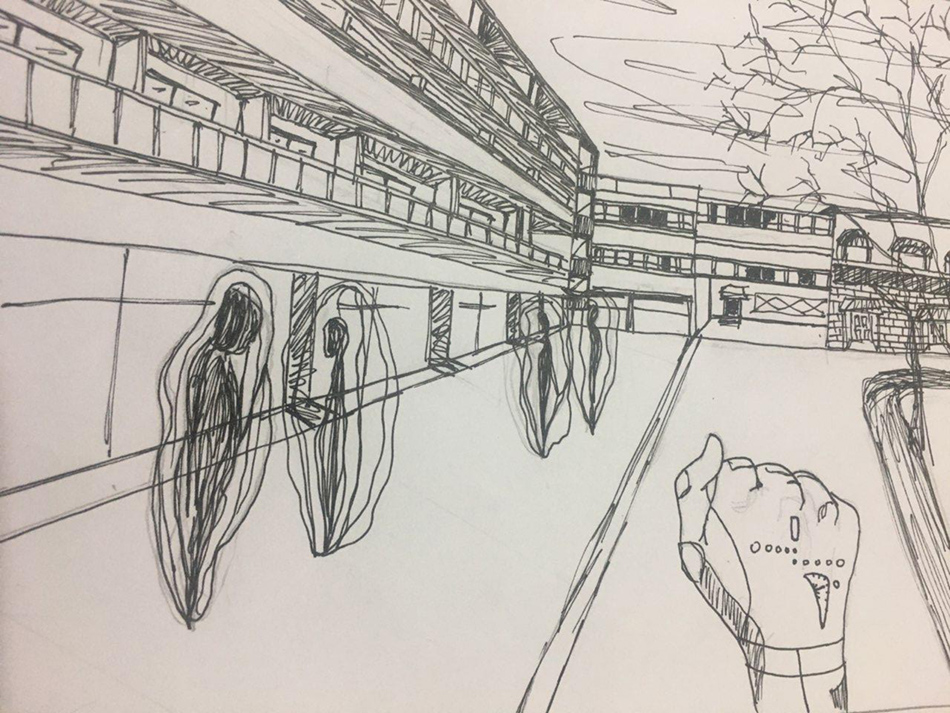 Your goal in this game remain the same, as in my earliest version of the game - find and stop the escaped guy.

Gameplay. How it's going?

The new gameplay is way more complex than initial concept and currently is being developed for over 4 months now. Among the changes of the initial basis, there also a lot of cool new opportunities for players to enjoy my game

The first important addition is a time glove itself. Initially, the game hasn't supposed to have any first person elements, and so the glove were a first thing that appeared.

The development process were quite interesting and it's the only thing in my game that ivolved SO MUCH people to help me implement this :) 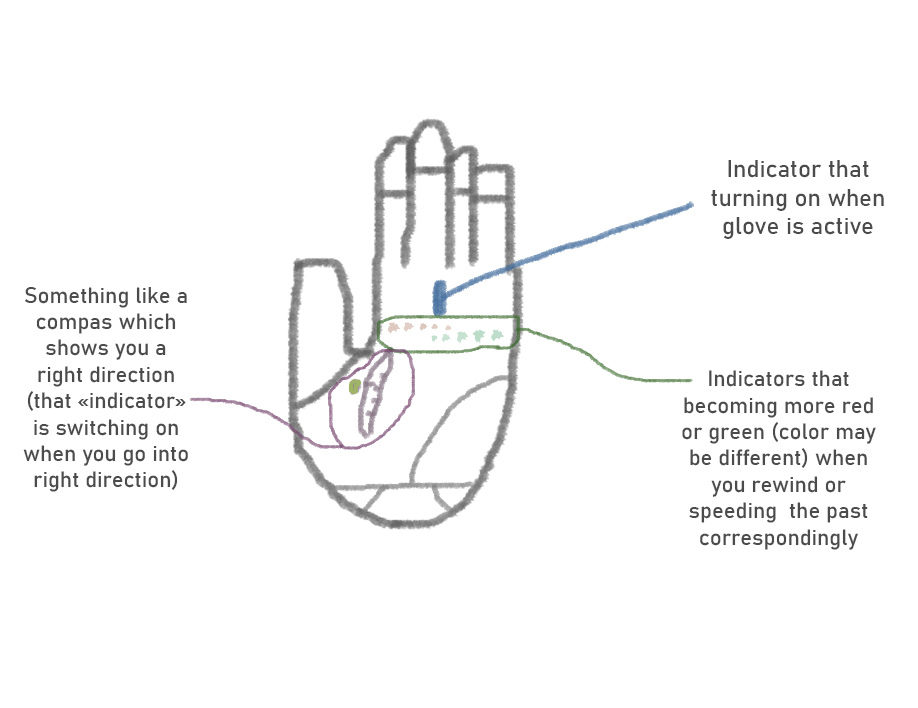 1. First, I made a very simple sketch of the glove by myself (I'm not an artist, lol) 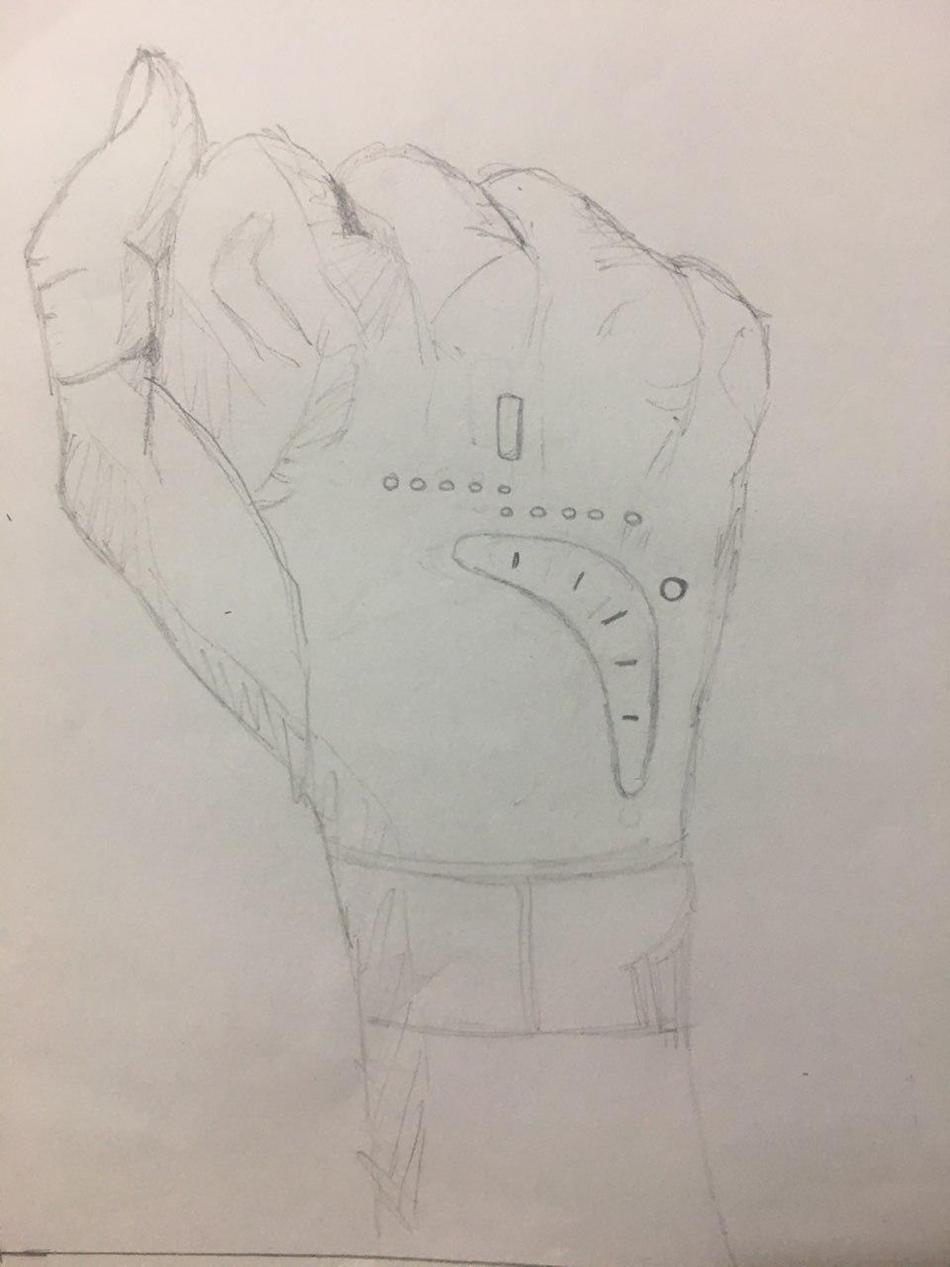 2. Next, my girlfriend Magali Lopez did the more detailed sketch of the gameplay (the gameplay sketch higher were also her) 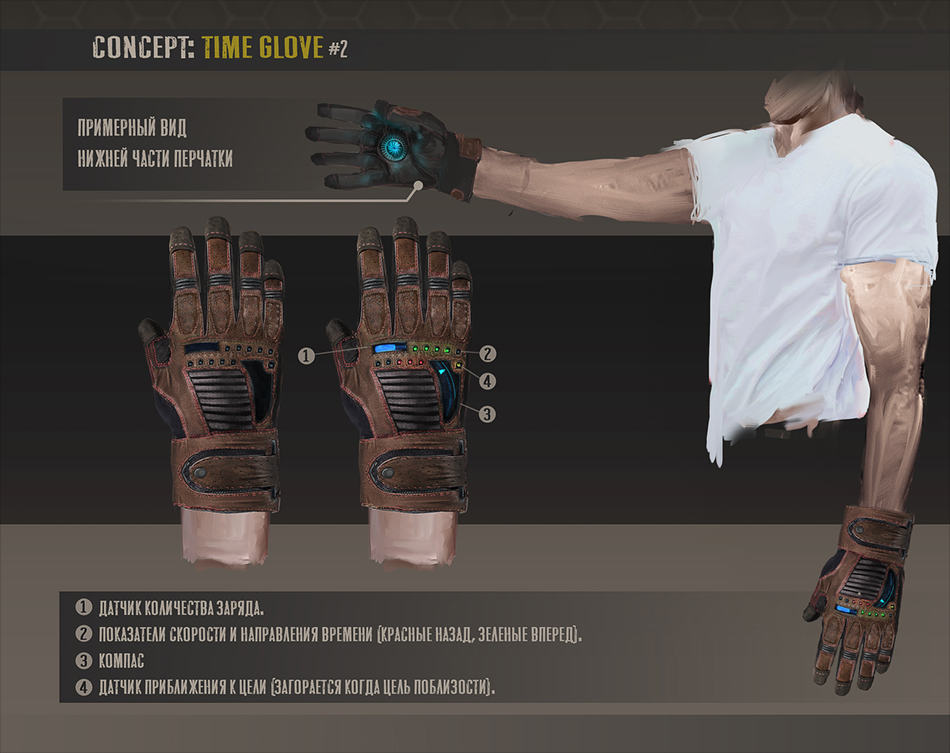 3. A very talented artist and friend of mine Andrey Hohlov made a following detailed concept of the glove based on my ideas and sketches we had. 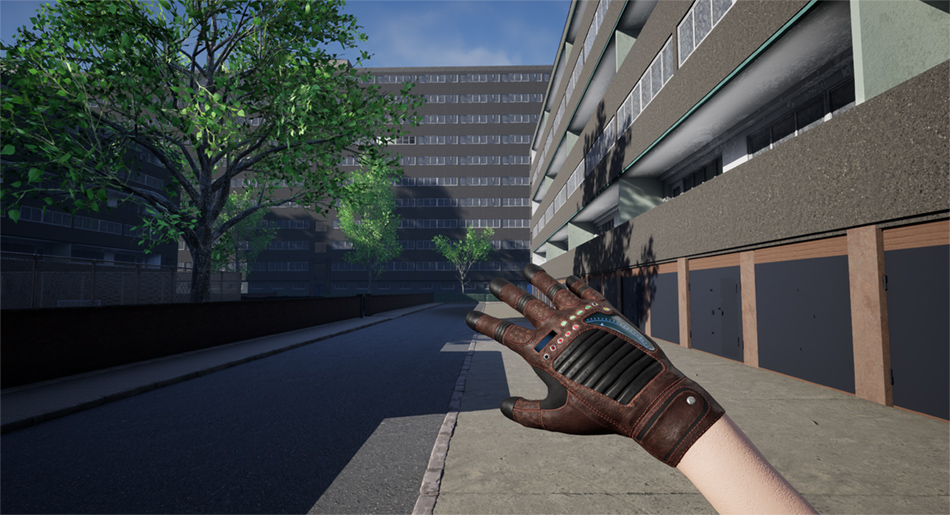 4. And finally (for now), a very talented 3d artist and friend of mine Pavel Ivanin is made and animated the glove in Blender and exported all that in Unreal!

However, there were more details.

One of such brand new details became a smartphone, that will give a huge flexibility in narrative for the players since it's going to have a fully flexible social media feed with all the info needed. 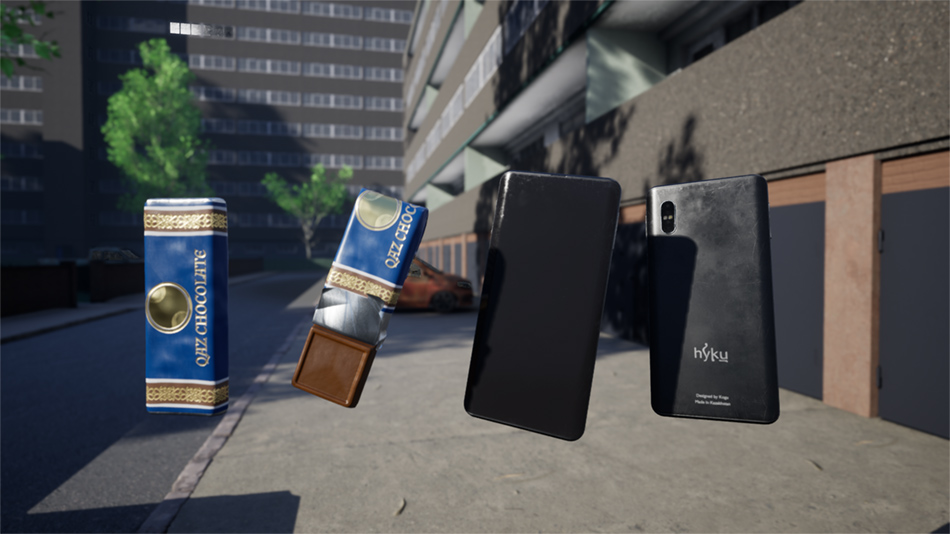 Another part of the gameplay features is a chocolate bar. Why are they there? That's a good question but I don't want to give you so much spoilers yet, so you could guess that in comments if you want :)

Both models are made by Pavel Ivanin using my references as well.

Last but not least - the gameplay itself. Why it takes so much time? The answer is simple - AI (there's nothing beautiful to show yet)

Yes, the game became SO much complex, that Kris is now writing a C++ system for my game FROM SCRATCH and the ghosts are not rail-based but smart and multi-functional guys who will find paths and decisions by themselves!

That means, that the game supposed to give you unique experience EVERY TIME you're playing, and that's the most exciting for me here!

Thank you, if you read all that text. And have a nice day!

More amazing details are coming soon, so I'd really be grateful to you if you will follow my game here on social media :)

Keep in mind! Articles are not updating in time!

For current screenshots and feedback with me, please,