In the new devlog, we share our design ideas on how we introduce roguelite meta progression systems to a city builder game. 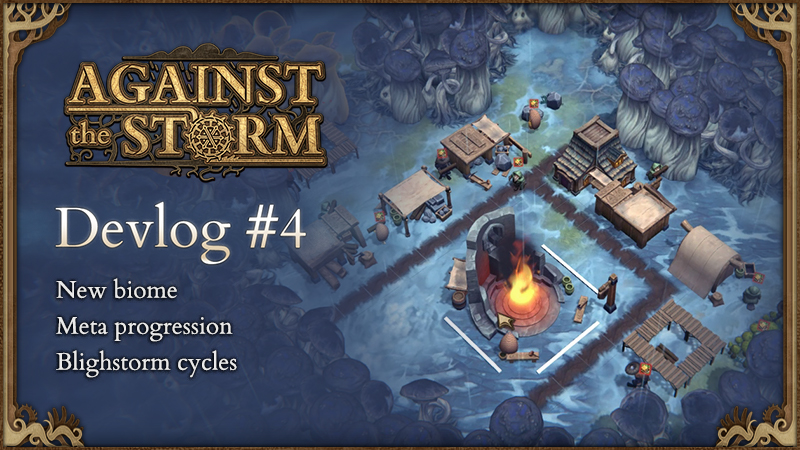 Citizens!
We’re back with the second instance* of Meta-progression-focused devlogs. We already covered the World Map and Smoldering City which gives us a pretty good foundation to take a deep dive into meta progression systems.

In this issue, you’ll learn:

*Missed the first part? We got you covered:

IMPORTANT: Everything you’re about to see and read is a work in progress art and design. It consists of some “Developer art” or early ideas and does not represent the final quality of the game.

The Smoldering City (or the Citadel), described in the previous devlog, is a form of an avatar of progress. You will invest in it and develop it between runs, leaving a permanent mark on the World Map. Within The Citadel’s sphere of influence, you can place Upgrades that reflect the available opportunities and bonuses. 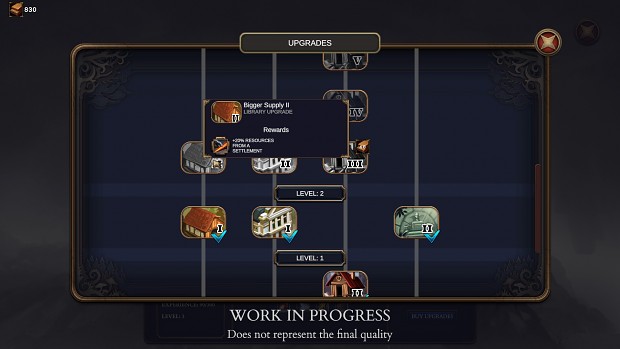 You will also build settlements on hex fields far from the Citadel to gain the meta currency which allows you to develop the Capital and unlock new content. Every few games, a Cataclysm (aka Blighstorm or the Great Storm) destroys all settlements. After the Cataclysm, the World Map changes - the farther from the Citadel, the more significantly. However, it does not affect the structures of the Citadel.

The Meta Progress system is meant to be a compromise between the sense of rebuilding (associated with city-building games) and the design need for roguelite features (predominantly the infinite potential for gameplay and a clean slate effect before each game). It is a double roguelite loop: 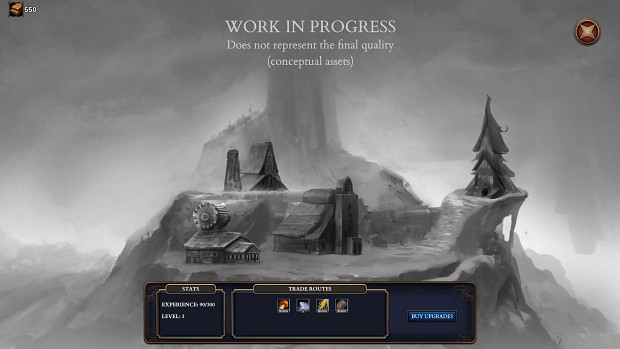 Citadel with some purchased Upgrades

There are two essential meta currencies you will gather:

Awarded for games played in the City Builder Layer. They can be spent on the development of the Citadel (purchasing Upgrades). Each settlement that you establish will give at least a few Resource Points, even if the run is failed (although winning the game will result in receiving more points). 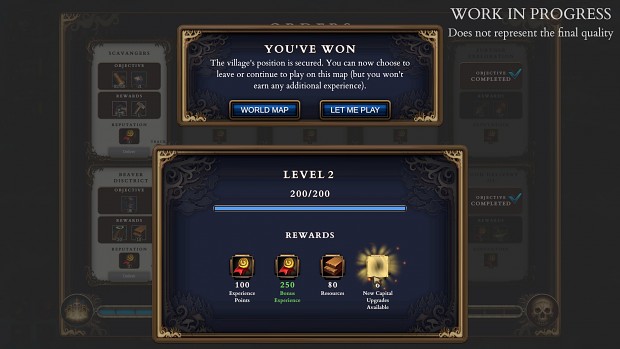 You will also be able to "extend" the playthrough after winning the game (filling in the Reputation bar before the Queen’s patience ends), which will also grant additional points, but not as many as setting up and playing a new settlement at the same time.

All collected Resource Points must be spent before the coming of the Blightstorm. If you have any points left when it arrives, you will still have the opportunity to spend them during the Cycle summary. After confirming the transaction, all remaining points are reset. The reasoning behind it is that we don’t want you to stash points for one Upgrade for a very long time. Although at first glance such an action seems desirable, it ultimately leads to many hours of boredom and grind, where nothing changes and there is no sense of progress.

Each settlement also gives a certain amount of Progression Points (for both losing and winning). The amount depends (similarly to Resource Points) on the amount of Reputation gained in a given game.

Some maps are marked with a special Deed icon - these are special fields with an additional challenge. For playing them, the player receives a bonus to Progression Points. The bonus is fixed depending on the biome (as a flat value at the end of the game).

Progression Points count towards the Progression Level. Capital Upgrades are unlocked linearly as you level up. Each Progression Level unlocks a bundle of Upgrades. Once unlocked, you can immediately purchase them with Resource Points in the Capital.

You start on the first Progression Level and have access to several Upgrades in the Capital immediately (they don’t need to be unlocked and can be purchased right away provided that you have enough currency).

Progression Points and Progression Levels are not reset with the Cataclysm (at the end of the Cycle).

From time to time, the World Map will be shuffled (due to the Blightstorm). The farther from the Capital, the less stable the world is. The Citadel itself is not subject to Cataclysm changes, but the further you go, the greater the differences after reshuffling can occur. 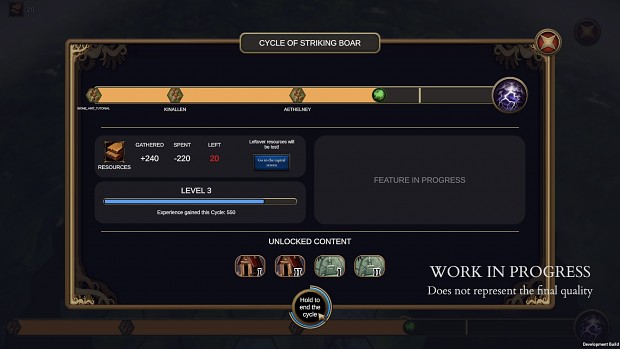 The Blighststorm countdown bar is related to the number of Cycles that you spent on all settlements built (in the City Builder Layer of the game). A single Cycle is simply the passing of three rain seasons in the game: Drizzle, Clearance, and Storm. The Blighststorm countdown bar is visible but it represents imprecise data to achieve a sense of anxiety.

Theoretically, this time (between Blightstorms) could be spent on a very long game in one habitat, but the most optimal result will be achieved by playing several games.

What if the time until The Great Storm runs out?

When the counter bar reaches the end, a Cycle is summarized. All your structures outside of the Citadel are subject to reshuffling. In most cases, your settlements vanish from the map. There is a small chance, though, that the settlements will leave behind ruins: destroyed versions of previously constructed buildings, which can be cheaper to rebuild. The World Map is subject to the reshuffling of biomes. The reset occurs and you start over with everything you accumulated and built in the Citadel. Resource Points are lost, but you keep your Progression Points and Progression Level

As mentioned earlier, biomes on the World Map are subject to reshuffling. For now, you were only able to see the basic Royal Woodlands biome. But recently, we also introduced a brand new biome - the Marshlands. 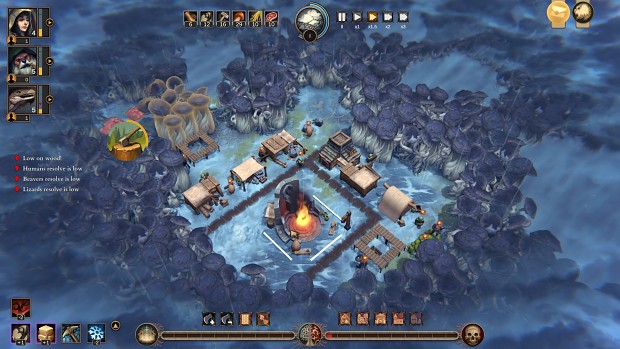 These are harsh and unforgiving lands. There are but a few vegetables and meat here. No roots, no fur, no carbon. Fertile Soil patches are very limited. The cold climate makes it harder for villagers to survive and work here.

If you want to learn more about the types of trees in Against the Storm, check out Devlog #1’s Dense Forest section.

If a player succeeds in a City Builder layer, a new town will appear on the map, allowing them to establish Trade Routes with it during the subsequent runs. We will cover them in the upcoming Devlog, so keep your eyes open.

You can also follow the game on Steam to get all the latest news.

Time for your feedback

So… Mushroom biome, huh? Let us know what you think of the new features in the comments section or head straight to our Discord server. And if there are any other topics you’d like us to cover, please leave your suggestions!

May the storm be gentle on you.
Eremite Games

Devlog #3 - Smoldering City, World Map, and more!
Learn about the history of the Smouldering City, uncover the World Map and learn about how each field differs from another.

Devlog #2 - Feedback Summary, Plans, and More!
Watch the gameplays from the demo, discover reactions from the game, and learn how we plan to assess your feedback.

Devlog #1 - It’s alive!
Discover the design ideas behind the Dense Forest system, get to know the Beavers, and learn more about building modules.

Join other villagers on our official channels: