This DevLog covers Capturing and then Ransoming (or taking ownership) of Slaves, along with some of the customization available for your very own Slaver-House.

There has been a bit of a gap in between DevLogs, as I’ve just finished working on a some large and interesting new systems in the game. Two of which I’ll be talking about today...

In this universe, each Slaver who collects and fights humans is part of a larger organization called a ‘House’. Each Slaver House has it’s own Ship filled with Slaves that, like you, will travel the stars from Event to Event. They will battle their Slaves, purchase and build Arenas and pursue other sources of revenue in order to increase profits - but I'll cover that in another DevLog.

At the start of the game you’ll be prompted to select a logo and a pair of colors - one for your logo, and the other is your primary color. 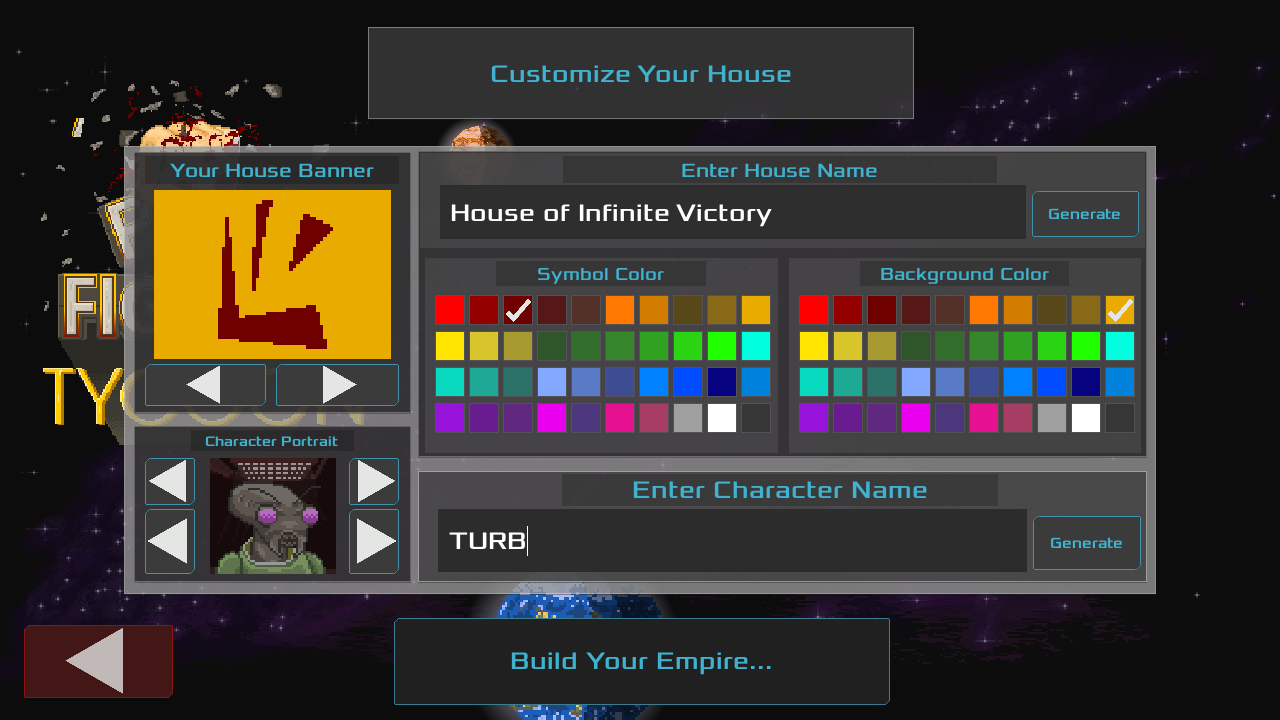 These colors will then follow you throughout the game, and are displayed on the things you own - like your slaves, or your ship... 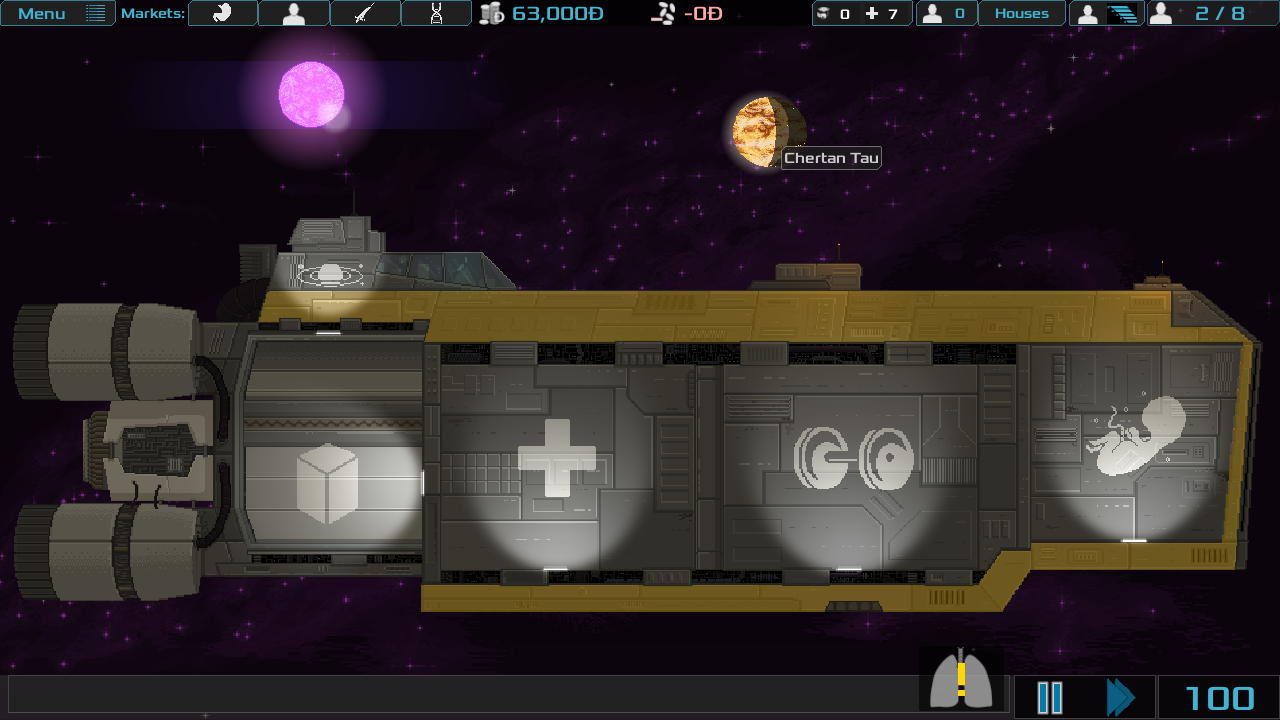 You’ll also get to choose from a number of Alien species, and pick yourself an adorable or horrifying portrait. There are no advantages or disadvantages for picking a particular species (sorry, no room for space racism here), so you can play as whatever you like. 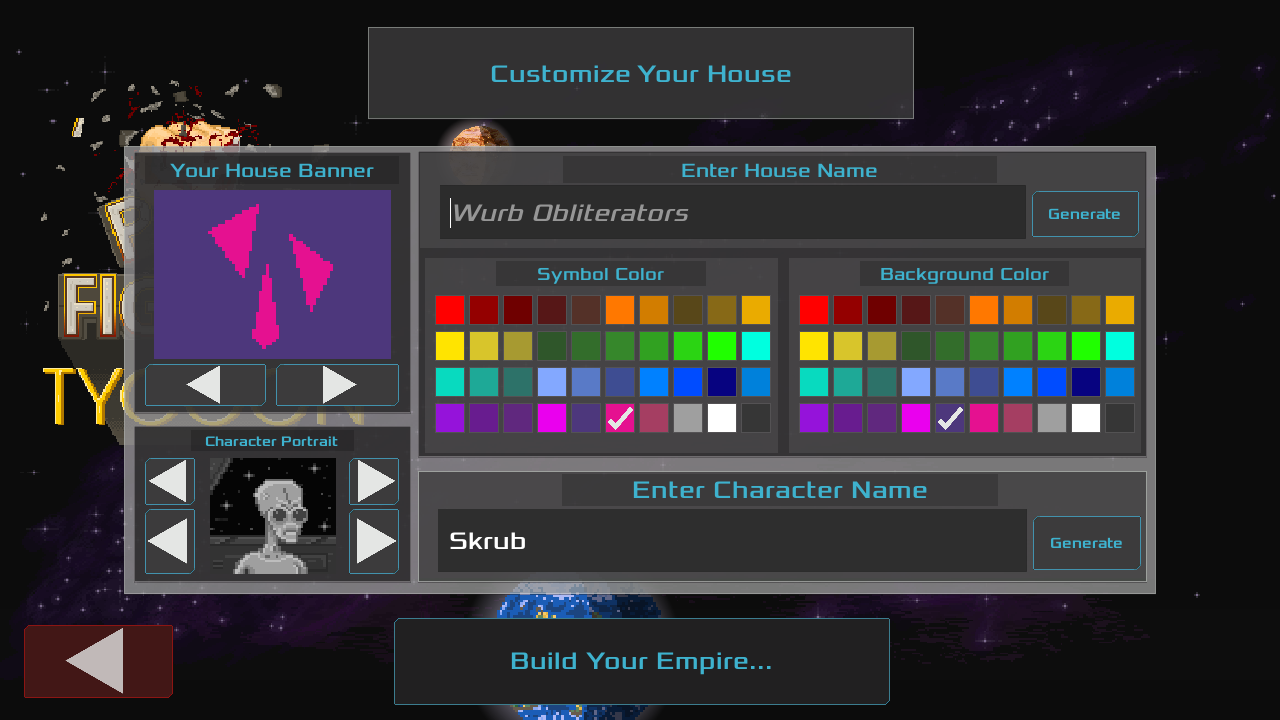 In this image, we are creating the Wurb Obliterators, who are owned by the alien ‘Skrub’ - a classic grey alien.

But other than just added flavor, why is this important? Well...

When one of your Slaves are victorious in the Arena, you’ll be presented with the option to kill or spare their opponent. Killing your opponent will please the crowd, who in turn will shower you with love (and Credits). But if you are benevolent and spare the Slaves’ life, you’ll get the opportunity to Ransom them back to their previous owner. 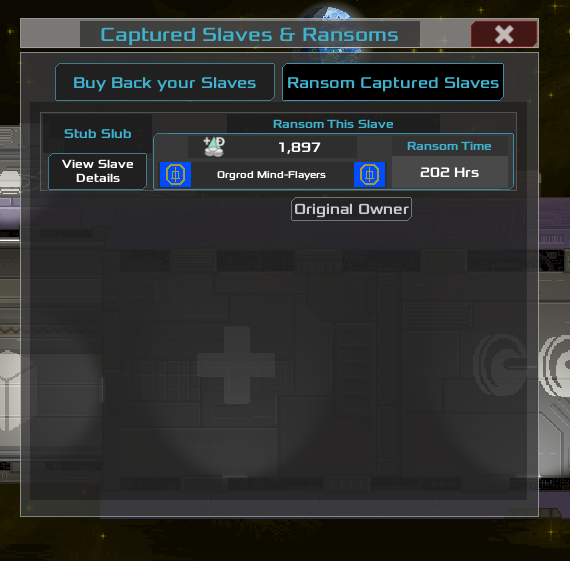 In the above image, we have taken custody of ‘Stub Slub’, who was owned the Orgrod Mind-Flayers.

Each ransom has an expiry time, after which the ownership of the slave will change hands. This also allows you to increase the number of slaves you own quickly and cheaply. Collecting a new Slave can significantly boost your own house, open up new fights and earn you even more Credits than before.

But this cuts both ways.

If your slave loses their fight (perhaps due to a poor choice of opponent on your part), they will be taken hostage by an opposing house.

You'll then have 2 Cycles (in game weeks) to negotiate and pay their release fee! 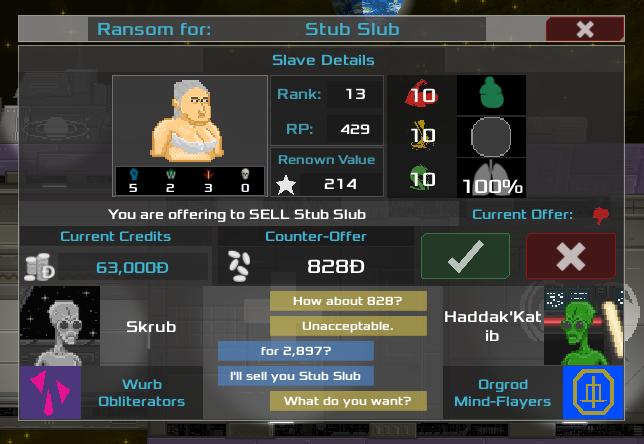 You'll have to haggle a price with the opposing Slaver. Some will pay almost any price for their valued slaves. Other Slavers will treat humans as bothersome livestock to be sliced up and sold on the organ markets after a defeat.

How they treat their own slaves will also affect how willing they are to negotiate a price. 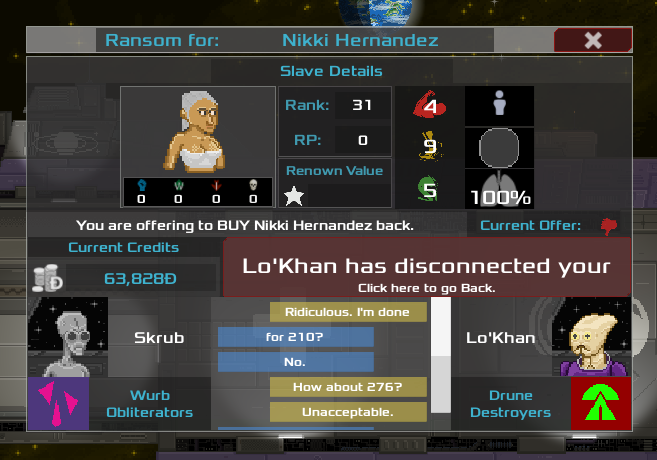 This system will reward good fight selection and provide a solid incentive to not murder every opponent you encounter. More importantly, it will also punish you for bad decision making, costing you Slaves and additional Credits after a crushing defeat.

That's it for this DevLog! Stay tuned for the next one, which will cover how you can ultimately crush your rivals - or be defeated yourself!