A closer look at our level tool and all the cool stuff we can do with it.

Been working on level balancing a lot today (and a lot in the past several weeks, if truth be told...) We really want to reach that balance where timing, speed and health all meet into a spectacular showdown that’s intense and exciting without being overwhelming. And I would say we’re solidly getting there. Been doing a lot of iterations with small changes, building up a solid foundation. Once we have that, still plenty of small changes needed for individual creeps, health pools, bounty... there's lots to fiddle with. Considering this has consumed us recently, figured we could share the chaos with you. Our view could be just a bit biased, but there are a lot of interesting odds and ends with our level tool – think/hope you’ll find it fun. If nothing else, you can see all the options we’ve got to cater to all of your feedback and playtesting whims!

So first off, here’s a typical view of what I’m working with. Also note that I am not the coder – if there are any unity term flubs or similar mistakes, I apologize. (click to see fullsize and actually read what the things say.) 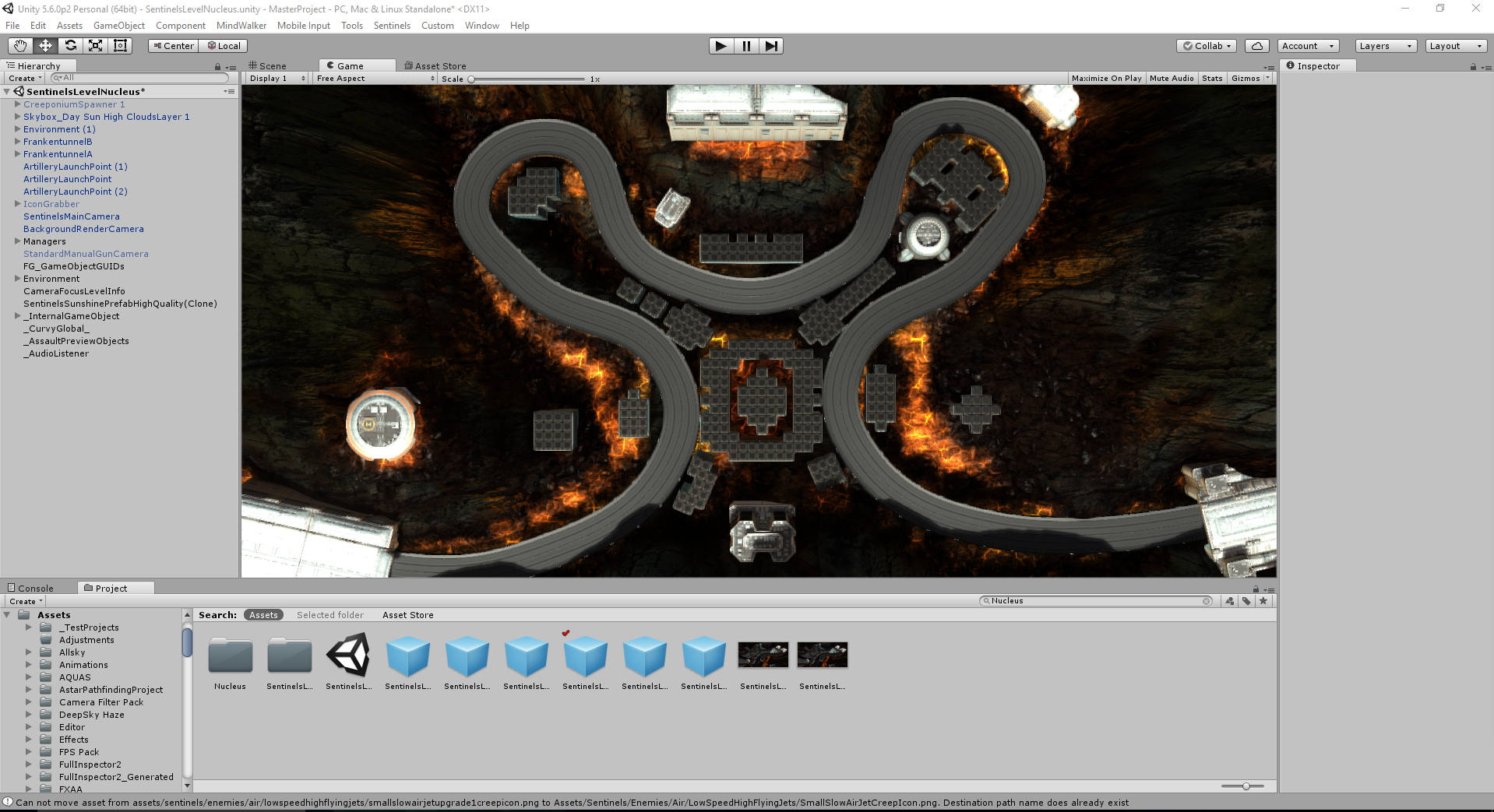 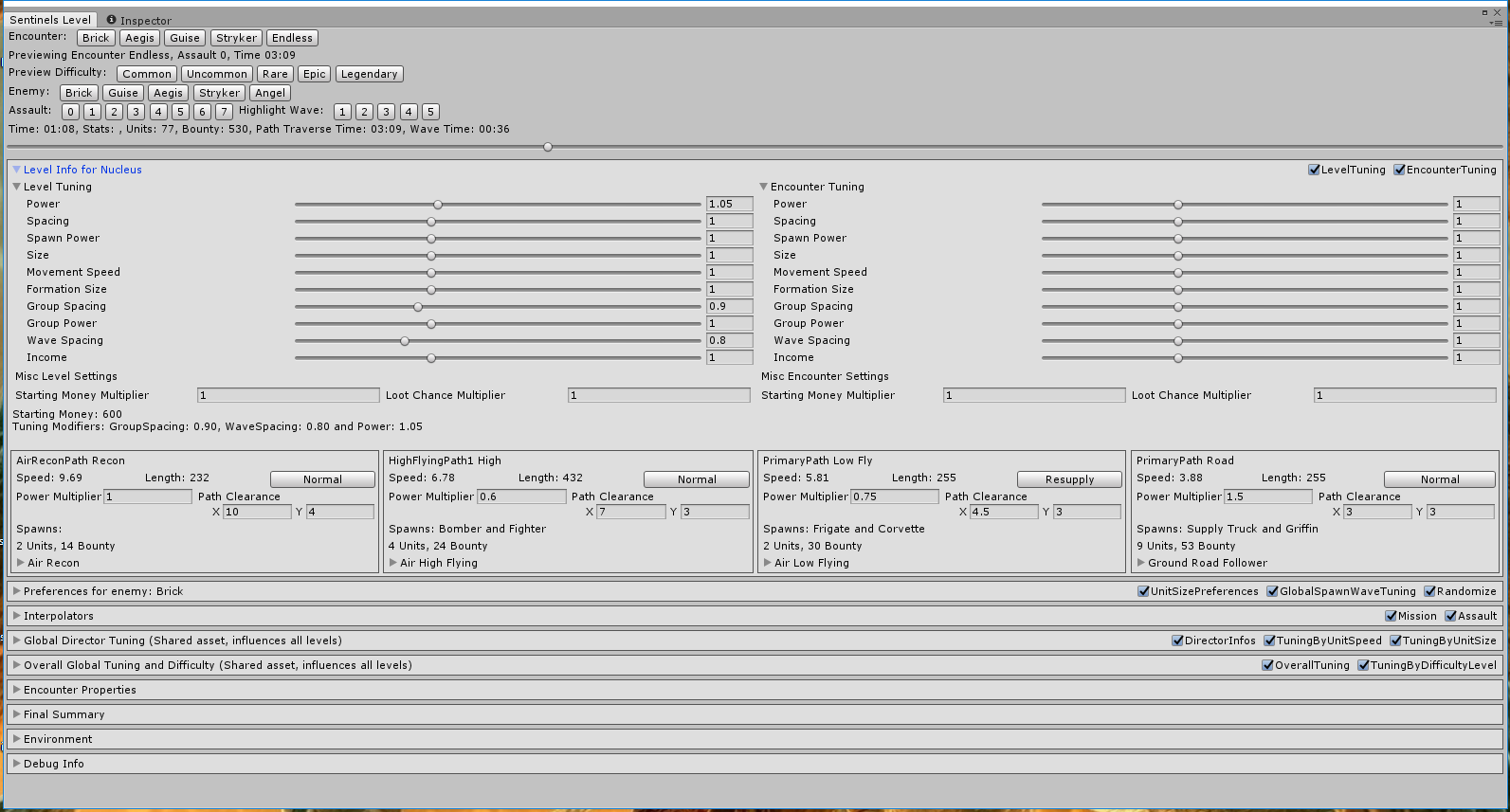 I use the first window pictured to see the actual changes and watch them in realtime. That monstrous second window is where I make all my changes. I can tune the entire level, or a specific encounter, as well as commanders and individual creeps. Right now, I’m using it to fix the speed of the runners. With the other universal speed changes we've made, those guys got wayyy too fast. Currently trying to balance their speed with the rest, not quite as easy as it sounds. Okay, moving the slider isn’t difficult, but finding the balance between a hyperactive runner and a sloth one is a surprisingly fine line. Except for the huge mechs. Those just look silly when they’re trying to sprint. 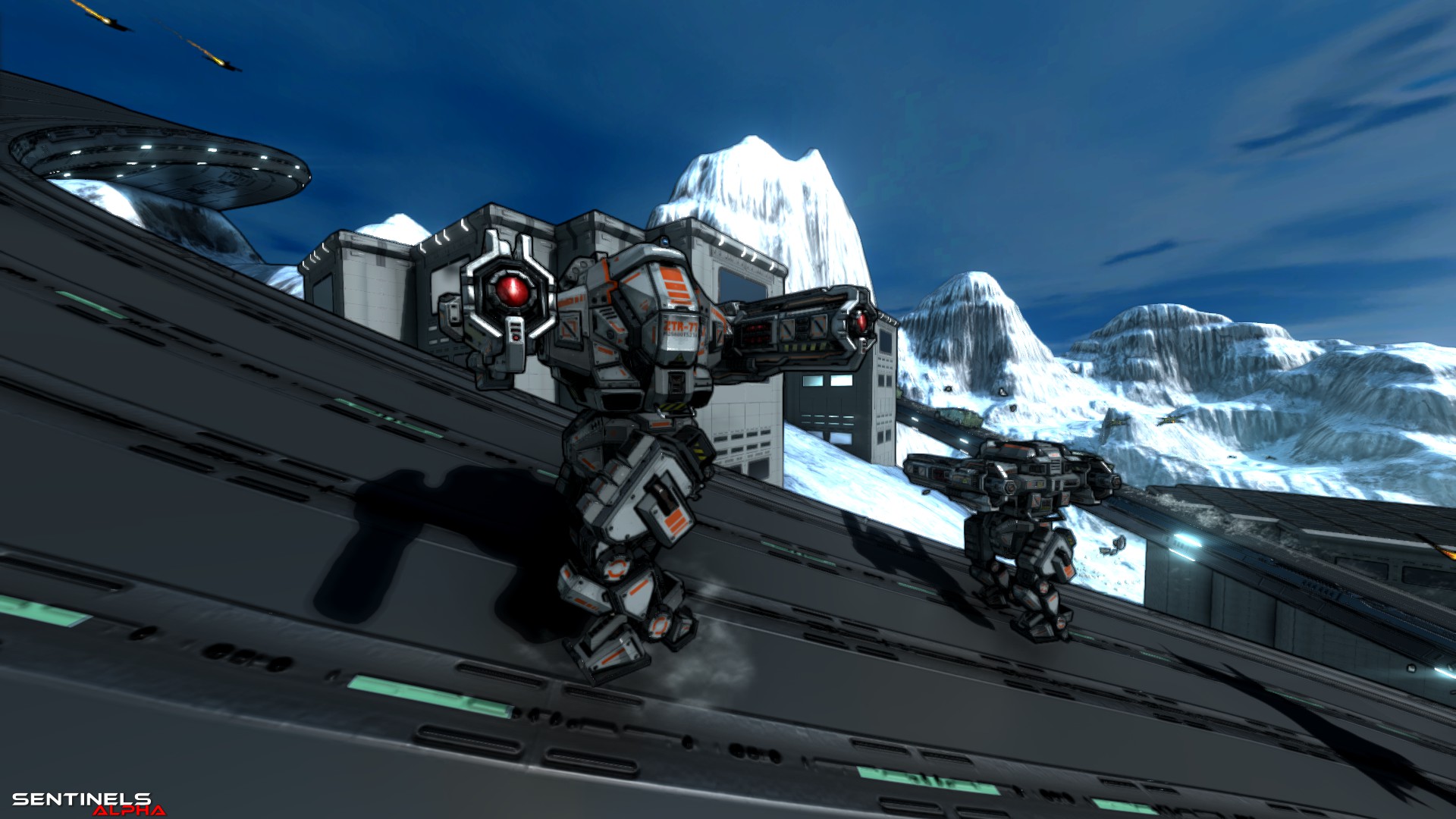 Basically, as you can see from the window, I have a lot of freedom on what and how I change things. A lot of time was invested into making the tool a few months ago, but it's definitely been worth it - having everything in one place and so easily editable has saved a ton of time. I can adjust size, amount, speed and health of creeps, tweak their flight paths or how much room they have to spawn in, and so much more nearly instantly. As new needs arise (for example, just exposed values for money gained during assaults vs. between - you'll be able to build more turrets during battle now, which is way more fun) it's added to the level tool and easily changed like the rest. As we continue to expand and add more to the game, I'm really looking forward to all the possibilities this'll give us in the future. 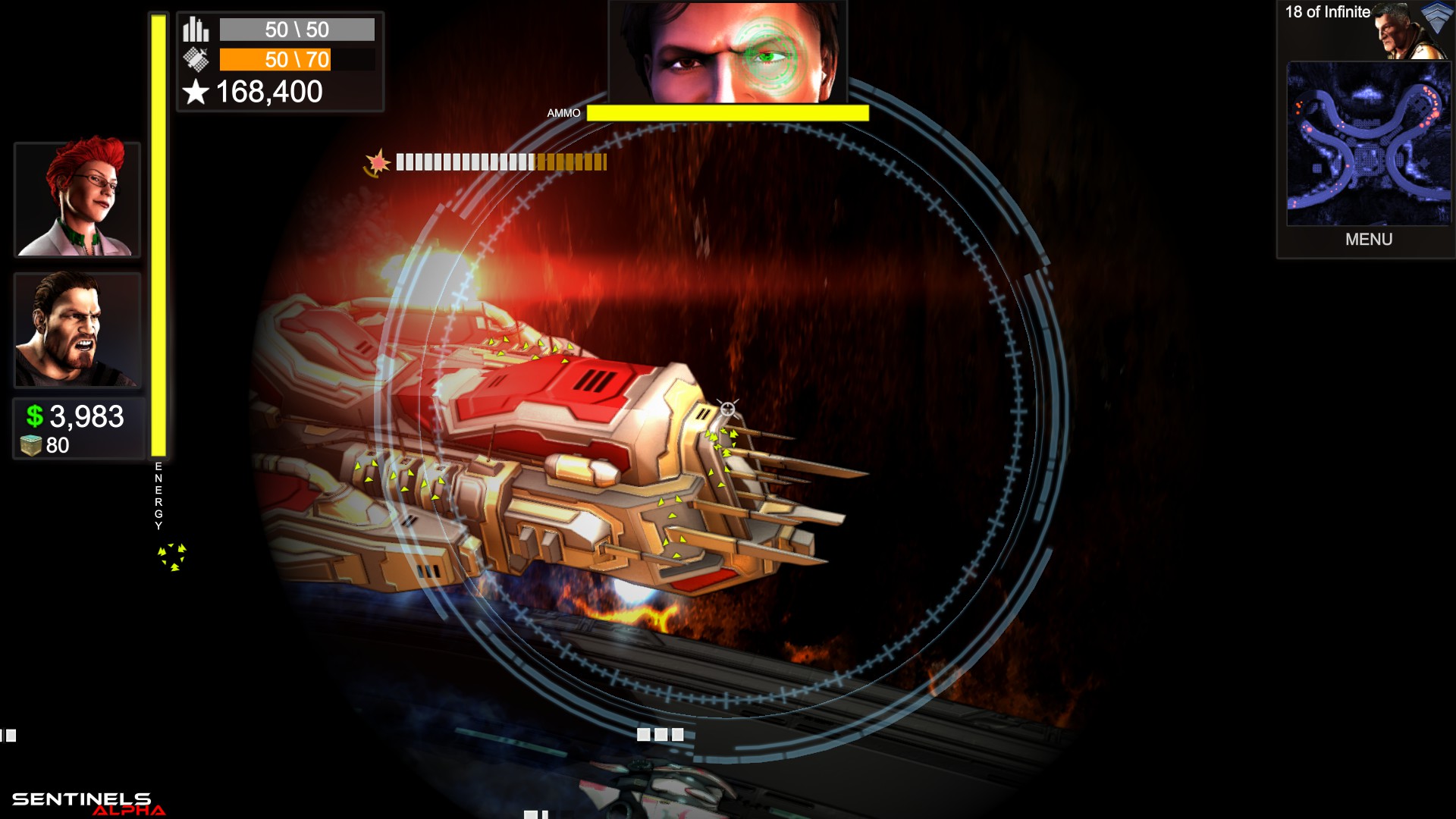 Another change that requires a lot of tuning is the addition of new creeps – we have several more planned (UFO’s are not off the table yet!) But each one changes the dynamic of formations. Add a creep, adjust their speed, height, frequency… then playthrough, notate everything off balance, and back to the level tool we go. But it’s entirely worth it – the frigate (pictured above, and my personal favorite enemy; It just looks so intimidating when it’s banking around corners!) went through a bunch of changes and iterations before becoming the monster it is now. Though it ended up being a little too formidable – while fine on the ground paths, it was too bulky for the shorter flying paths. So we added a huge plane for those paths instead, and now you have two terrifying things attacking you. :) 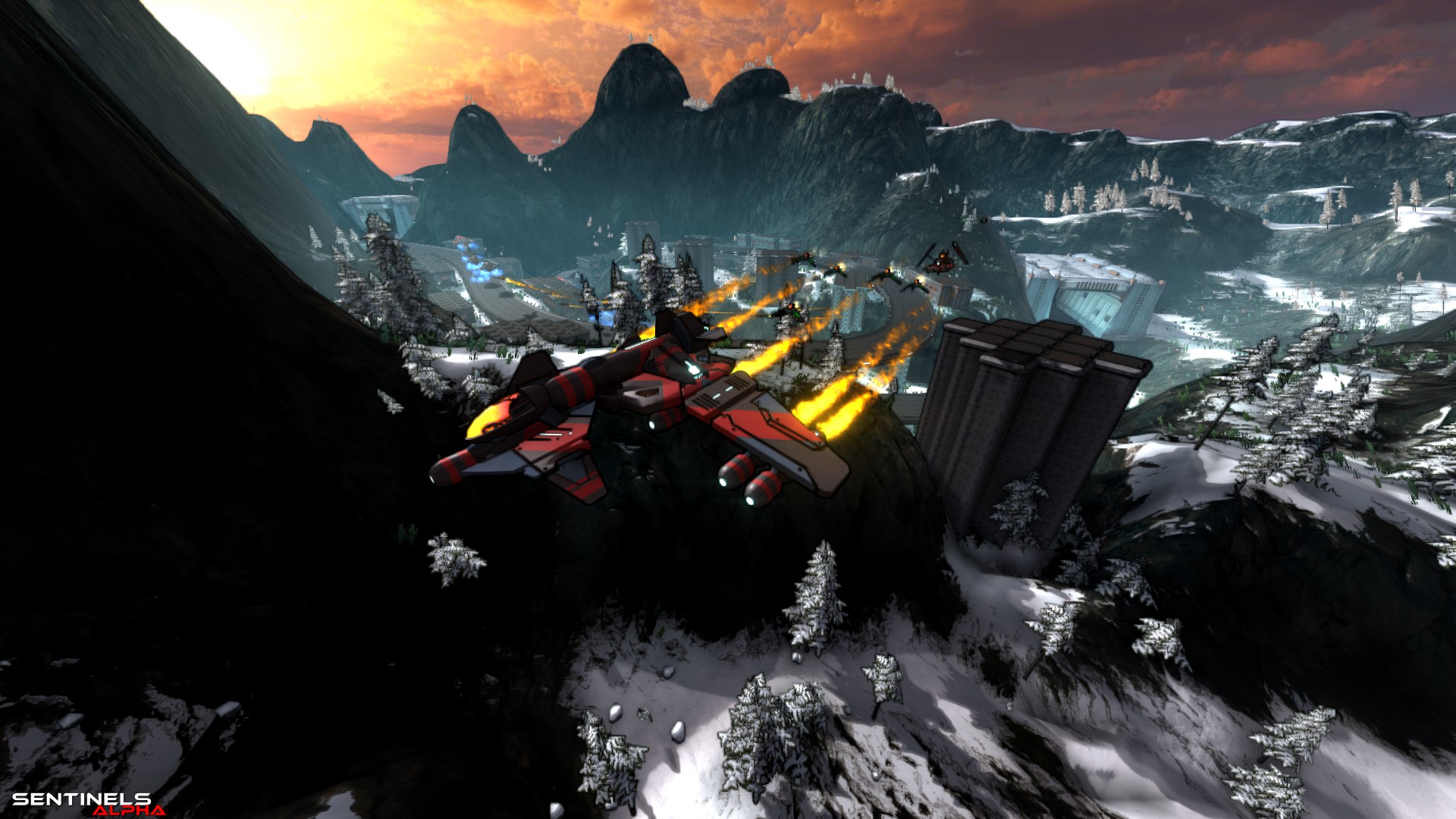 As we continue to add in more, we're going to give the enemy commanders unique creeps and some more variation. Their individual rosters are all set and ready to go, and once all of the new guys are implemented you’ll start seeing more specific creeps and situations.

Another thing coming up – new and improved bestiary. The timeline on this is ‘soon’, no solid date yet, but it’s high on the priority list. Our creeps have been a little lacking in personality – and it’s way more fun shooting them after hearing how dumb and evil they are! When finished, the bestiary will have crit points, descriptions, a nice moving model of each of the enemies, and will show each commander’s roster when you click on them in the loadout screen. 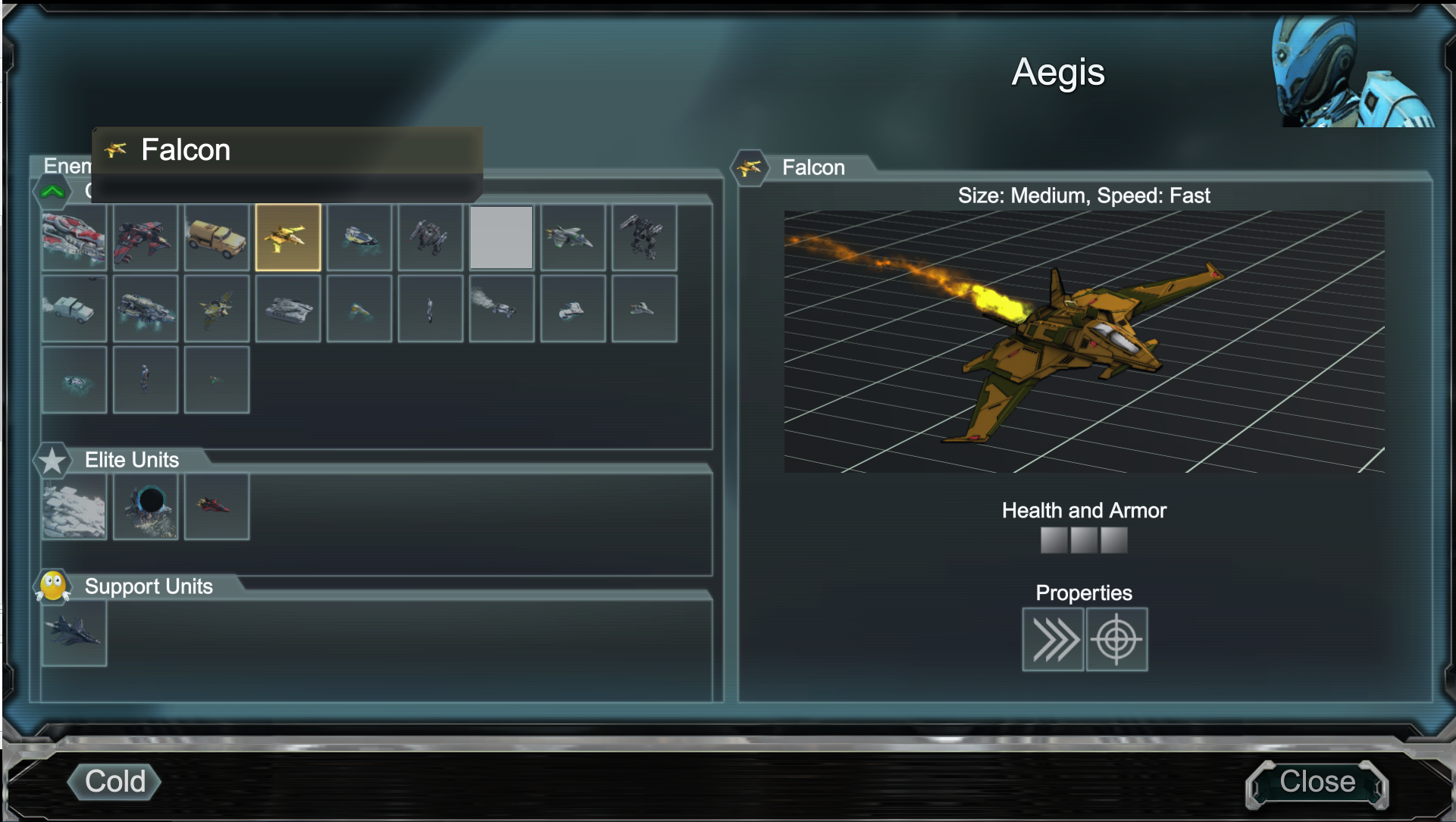 Of course, barely scratched the surface here, but at least now you should have an idea of all the tiny things we can fiddle with and change. Like I mentioned before, I have no hand in any coding or programming - my work is mostly on the front end and working with tools already made. MindWalker Games is just two fulltime devs at the moment, and we’re both busy wearing a lot of hats. I’ll be making posts more along this vein – behind the scenes, how we do tricky things, heck I’ll even write about bugs I run into if they’re amusing enough. But I’ll get the other dev in here occasionally to write more involved pieces about the technical aspects – like how he built this tool, for example. For those of you interested in coding and gamemaking in general, I promise those will be worth the read.

Think that’s enough from me for now, another post will be up in next couple weeks on whatever we’re consumed with next. Tutorials are something that have been lacking for a long time – we’re working hard on making the game a more intuitive and smoother experience overall. Thanks for reading, and be sure to follow us on twitter and facebook for more updates.