Happy New Year! As we enter 2020, Desolation will have been in active development for almost two years. We thought we’d take the opportunity to detail our overall progress thus far, reflect on what we’ve achieved in 2019, and share with you our exciting plans for the future.

Happy New Year! As we enter 2020, Desolation will have been in active development for almost two years. We thought we’d take the opportunity to detail our overall progress thus far, reflect on what we’ve achieved in 2019, and share with you our exciting plans for the future. 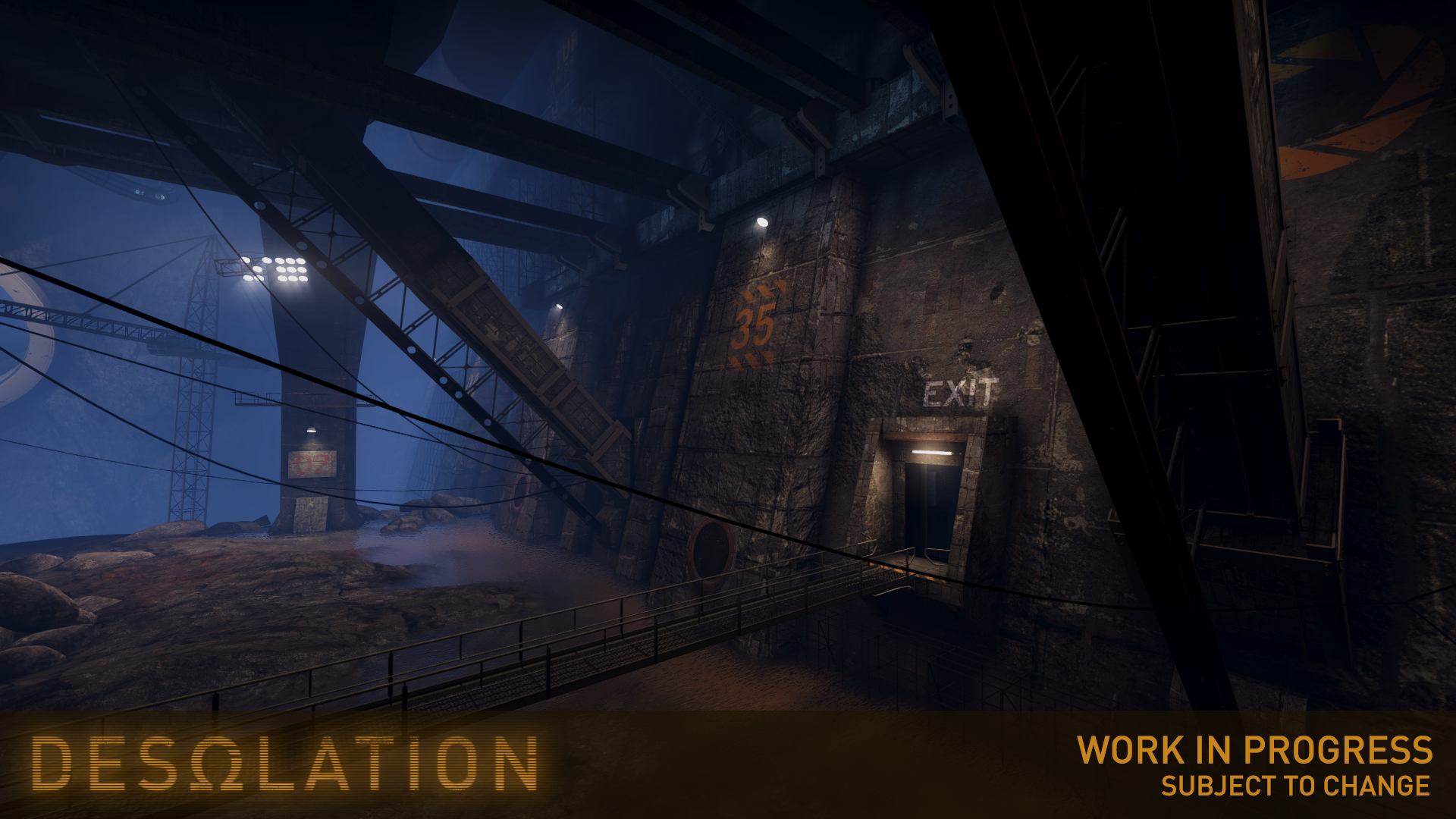 Although we’re conscious that the majority of development is still ahead of us, we’re really proud of the progress we’ve made. To give you an idea of just how much work we’re putting into Desolation, here are some stats showing our overall progress thus far: 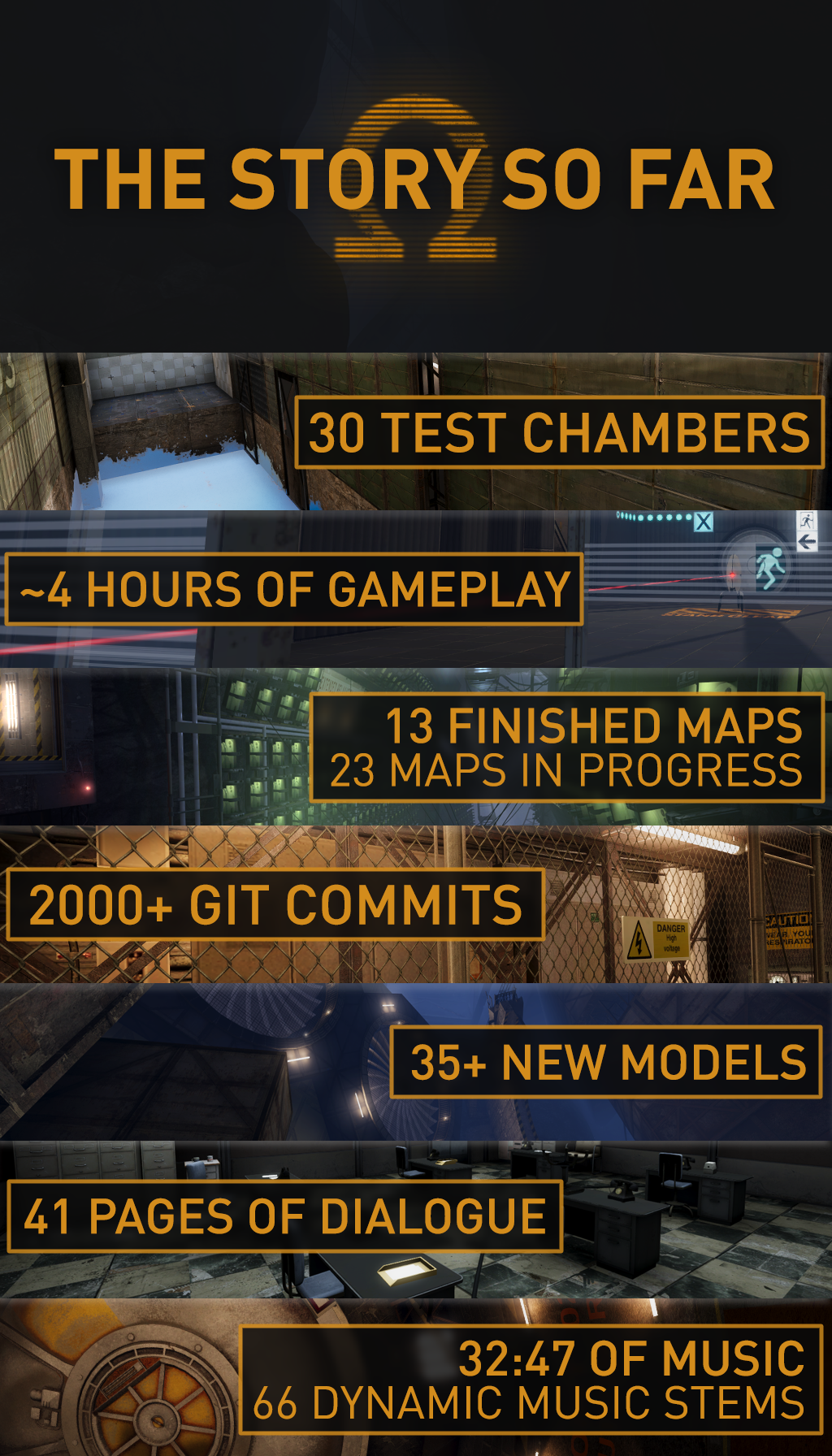 As you can see, the mod already has a substantial amount of content, and there’s plenty more to come! We’re committed to making Desolation not only a highly polished mod of professional quality, but also of generous quantity. We’re aiming to provide a truly fulfilling experience with enough content to rival if not exceed the scale and scope of Portal 2, giving fans an experience to treasure. In the final product, you can expect 50+ puzzles spanning seven chapters, two fun and challenging new test elements, beautifully crafted maps with enhanced visuals and custom models/textures, an immersive and atmospheric dynamic soundtrack, and a boldly innovative story unlike anything you’ve ever seen in Portal. 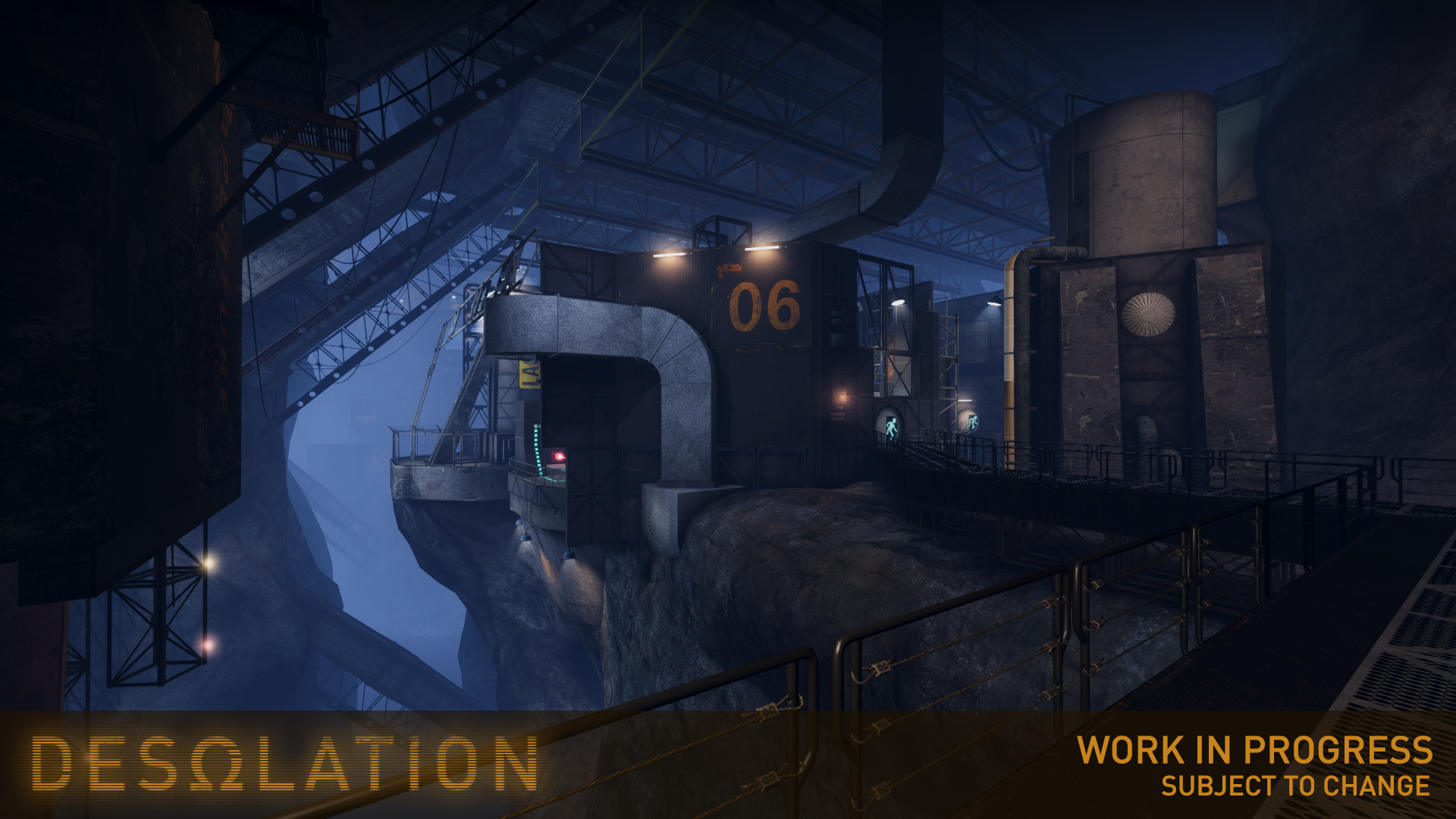 To achieve all this, it takes the dedication and passion of our amazing team: a team we’re very lucky to have. Our eager group of volunteer developers have outdone themselves over the course of 2019; with development now in full swing, we’ve made significant headway on all aspects of the mod. Read on to discover some of the highlights of what we’ve been up to.

From its inception, we planned to include two new test elements in Desolation. This year, among his various graphical and gameplay improvements, our programmer Josh has successfully implemented both of these exciting new mechanics. The first is Adhesion Gel, a substance which makes anything it’s applied to sticky, allowing players to climb walls and affix objects to surfaces. This element has an intriguing history, as it was originally intended to be part of Portal 2, but was cut from the final release for various reasons. We wanted to do the element justice and try to resolve some of its problems, so we’ve designed and programmed our own version of Adhesion Gel from the ground up. We’re excited to showcase its full potential in Desolation. The second new element is of our own design: a variant of the Hard Light Bridge, coloured orange instead of blue. We’re keeping the function of this new Light Bridge a secret for now, but we can tell you that it’s more complex and versatile than the standard Light Bridge, and therefore opens up many new puzzle opportunities. As such, we’re saving this new element for Chapters 6 and 7 to provide a brain-bending late-game challenge for keen puzzle solvers. 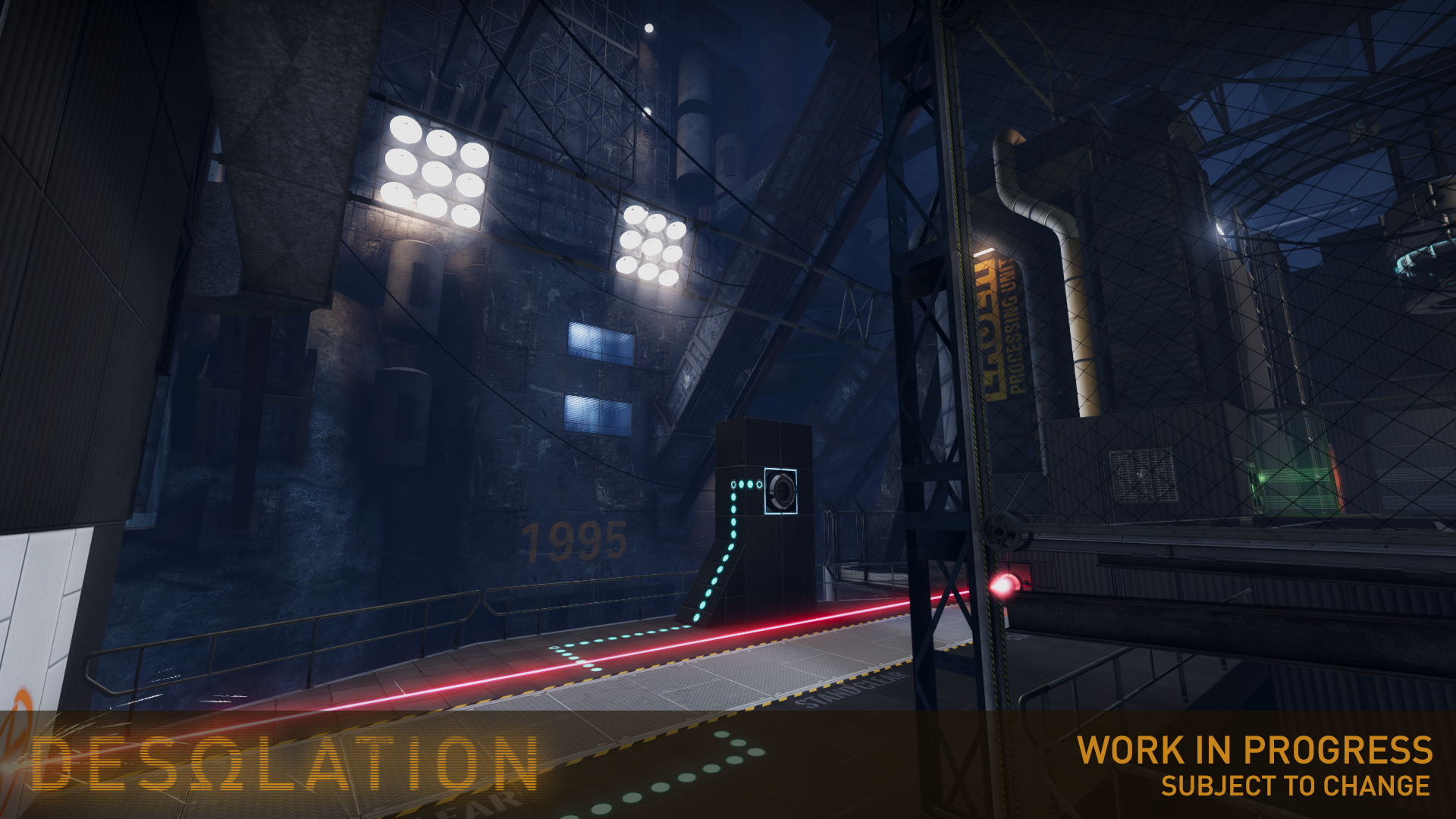 Meanwhile, our composer Roy has excelled over the past year, producing several new ambient tracks for Chapter 3’s test chambers. These tracks are moody and atmospheric, perfectly encapsulating the hauntingly oppressive tone of the chapter’s story and visuals. Carefully crafted to complement puzzle solving, the music aims to stimulate the player rather than distracting them. Roy has also engineered a bevy of new sound effects to enhance gameplay and contribute to the mod’s unique soundscape. We’re sure Desolation’s soundtrack will be a highlight of the game for many, and we’d love for you to experience some of it soon; keep an ear out in the coming months! 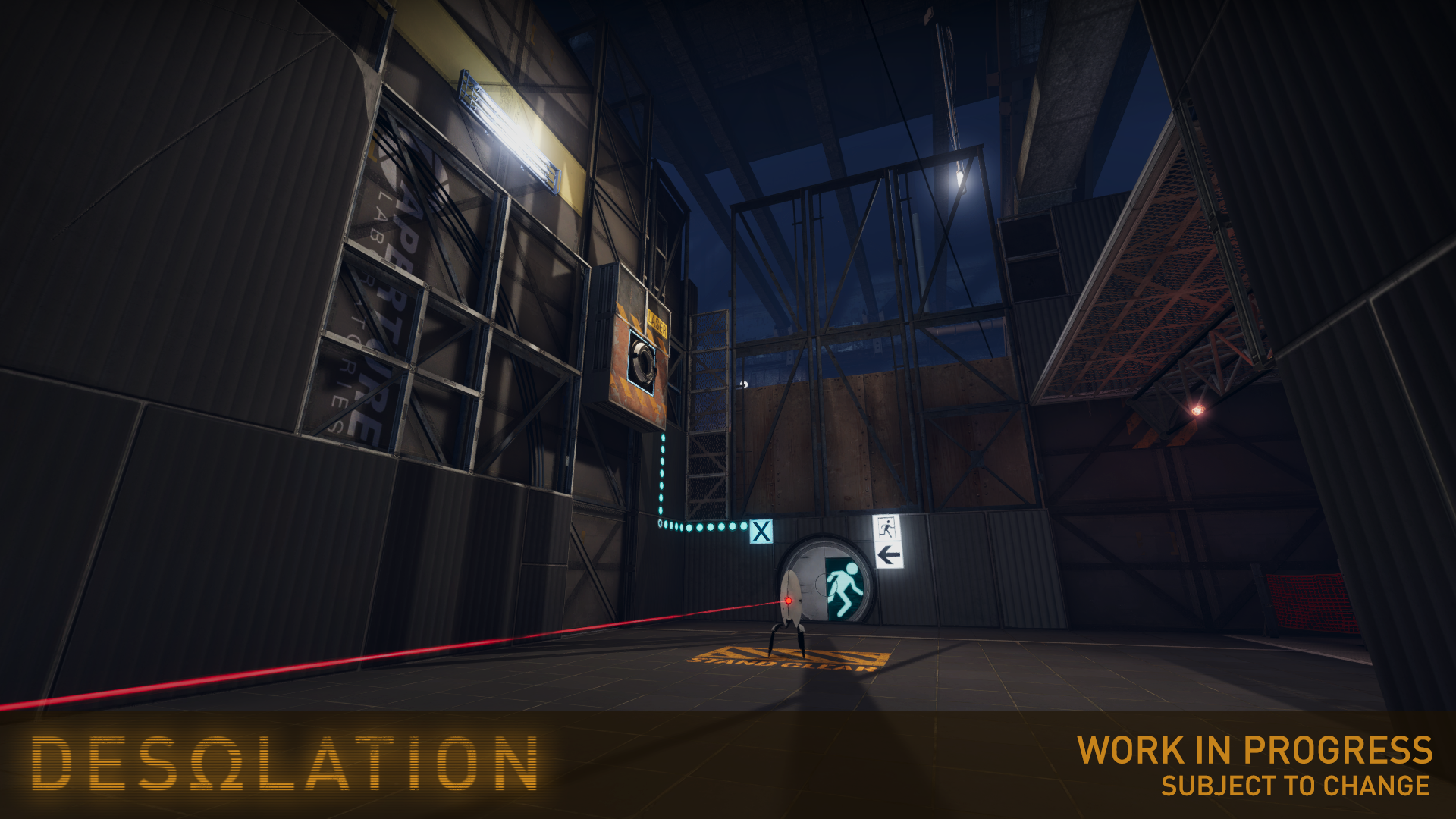 As for me, I designed over a dozen new puzzles for Desolation in 2019, which the talented environment design team have been hard at work converting into gorgeous in-game maps. These puzzles are placed in Chapter 5, and focus on Excursion Funnels and Mobility Gels, including the often neglected Conversion Gel. Expect plenty of exhilarating flings! This year, I plan to put puzzles on the back-burner and focus on fleshing out the fantastic story we have planned for Desolation. In 2019, having finalised the story outline, I began work on the script. I’m happy to say that Chapter 1’s dialogue is now fully written, and Chapter 2 is well underway. I’ve striven to ensure that the script captures the dark and foreboding tone we’re aiming for, while retaining Portal’s trademark sense of humour. We can’t wait for you to meet our brand new cast of characters and experience the thrills and shocks of the narrative, but for now we’re keeping things under wraps to avoid spoiling the many surprises and treats we have in store. Expect to hear more later down the line. 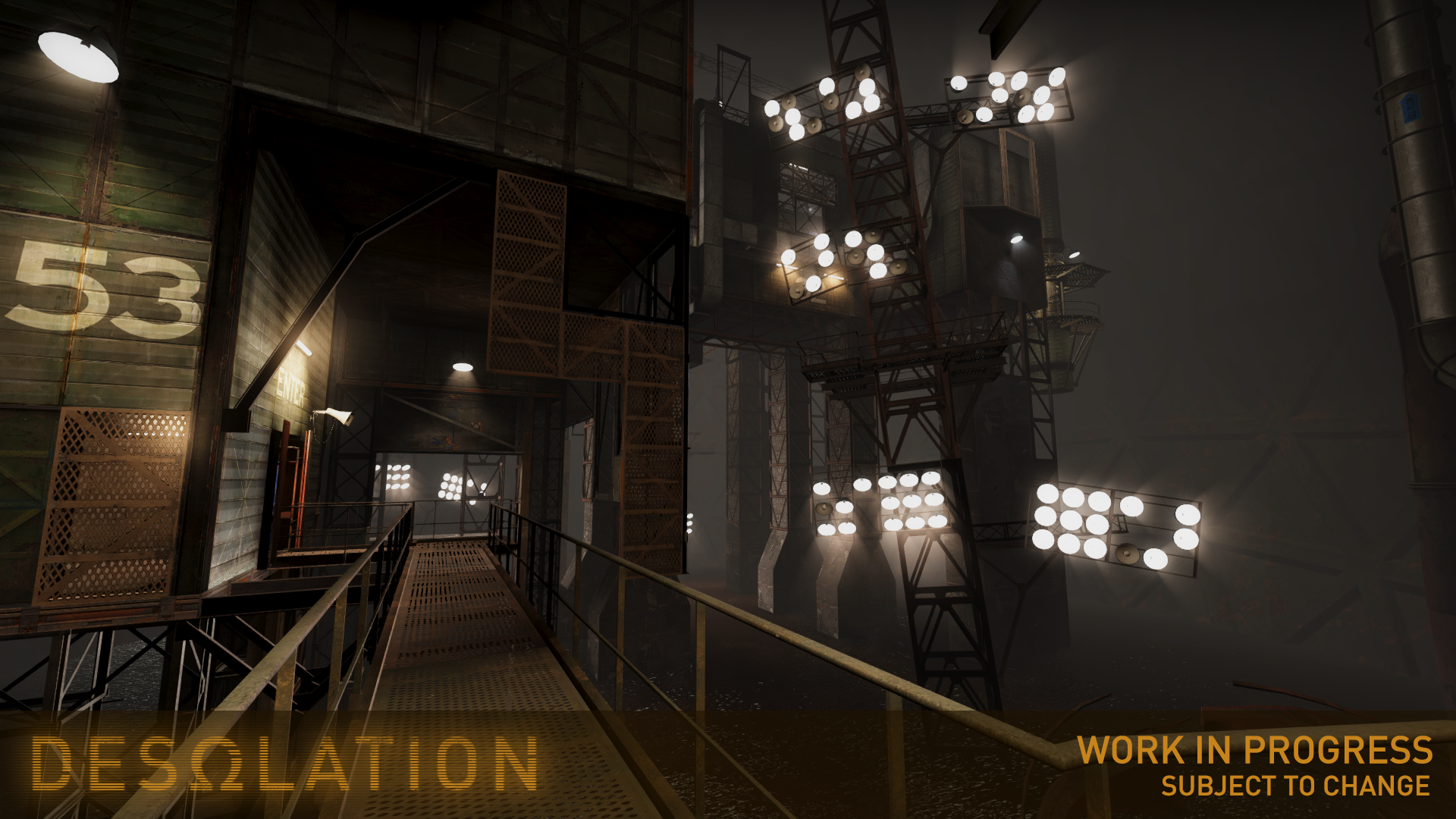 We’ve also welcomed some new arrivals to the team this year. Modeller l1zardr0ckets has been meticulously crafting a crucial model which you’ll get to see in action soon. On an entirely unrelated note, animator Wii2 has been producing the intriguing video teasers we’ve been posting lately, which showcase surveillance footage being relayed to the mysterious system administrator. What could it all mean? Surely these teasers must be leading up to something? Who knows…

One of our proudest achievements of 2019 was the Desolation Consumer Catalogue, an interactive online experience filled with lore, artwork, voice acting, and more! It’s our biggest and best teaser to date, so be sure to check it out here if you haven’t already. The catalogue was the product of months of effort from every single member of the team, and we couldn’t be happier with how it turned out. We think the catalogue is a testament to our ambition and creativity, and others agree. Gaming news website PCGamesN dedicated an article to the Desolation catalogue, and had the following to say: 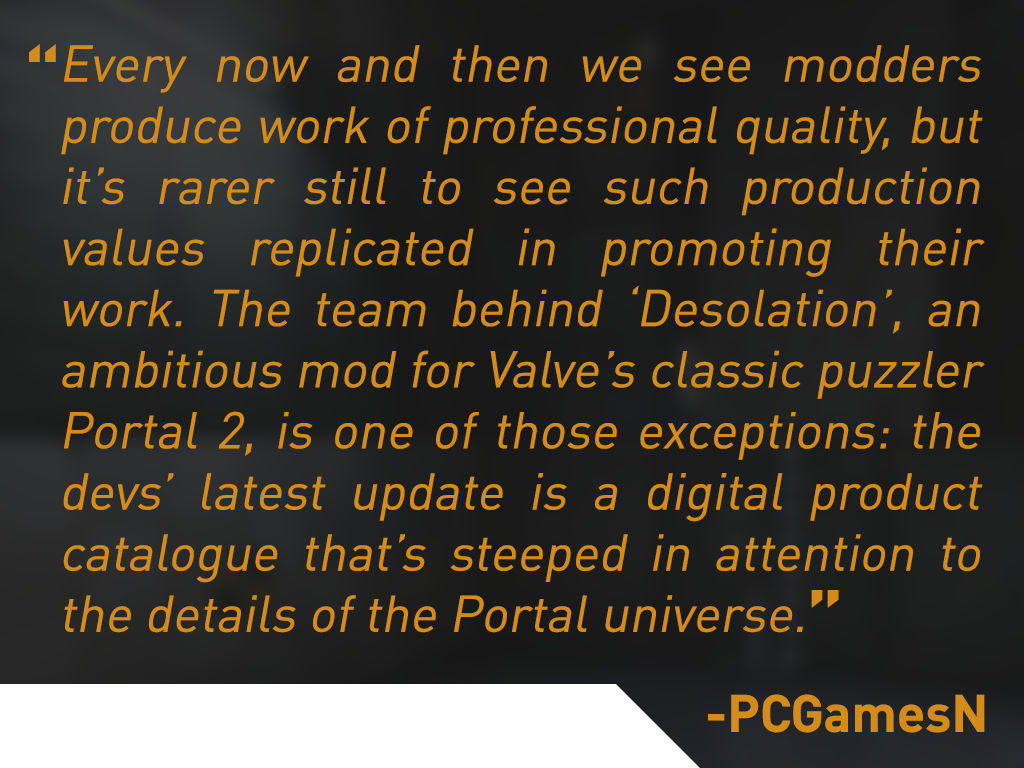 If you enjoyed the catalogue, you’ll be pleased to hear we have more exciting multimedia teasers on the way in 2020, so be sure to stay tuned on ModDB, Twitter, and YouTube! You can also click here to join our public Discord server for Desolation discussion, developer chat, and exclusive sneak peeks! 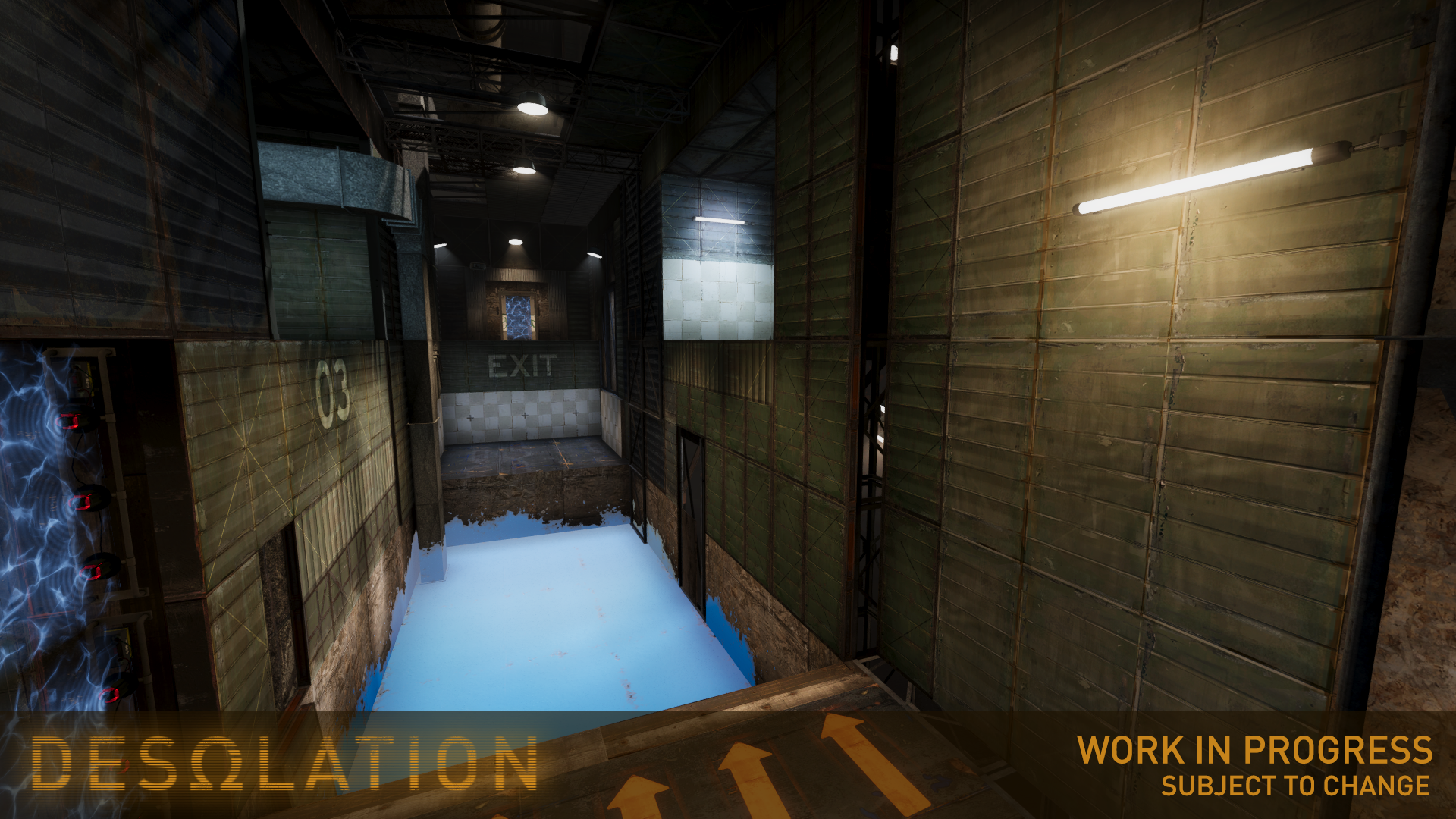 If you’re interested in contributing to the development of Desolation, please click here to apply to join our friendly and passionate team. We’re particularly interested in level/environment designers, 3D modellers, and 3D animators! If you don’t wish to join the team but would still like to give us a hand, the best way to help is by spreading the word about Desolation to your friends! 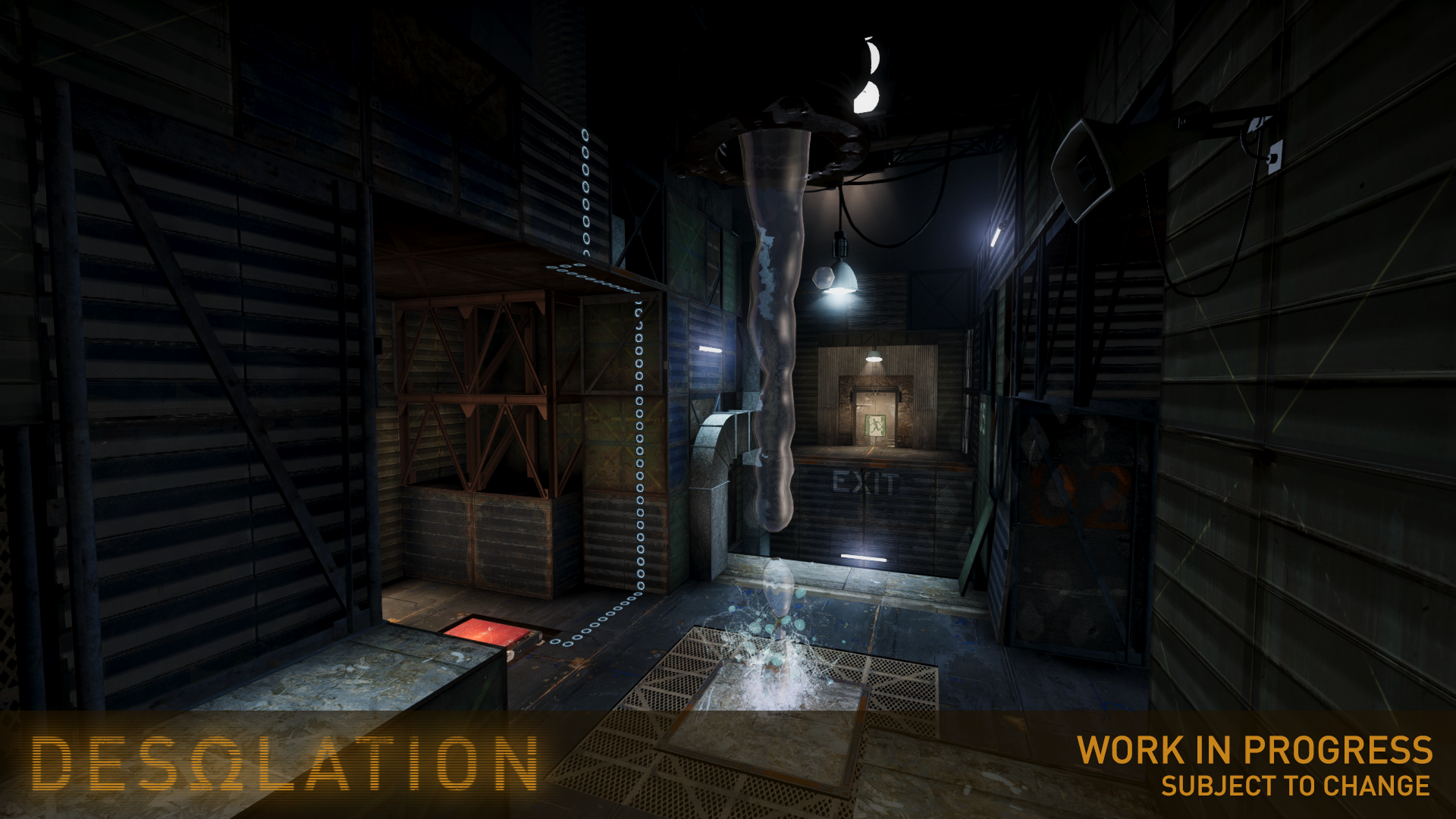 As we move into 2020, we want to keep up the impressive momentum we’ve had so far, while also shifting our focus slightly. Until now, we’ve been working primarily on puzzle maps in order to produce a solid foundation for the core gameplay. This year, however, we’re going to concentrate instead on key story maps and behind-the-scenes areas to flesh out the non-puzzle sections of the mod and change things up for our environment designers. In addition, our modellers will begin work on one or two of the mod’s main characters, and our programmer plans to polish and perfect Adhesion Gel as well as deliver more exciting graphical enhancements. Our composer will continue to write tracks for test chambers as well as delving into story-oriented music and sound design, and I’m looking forward to writing more of the exhilarating and emotional story. It’s going to be an exciting year! 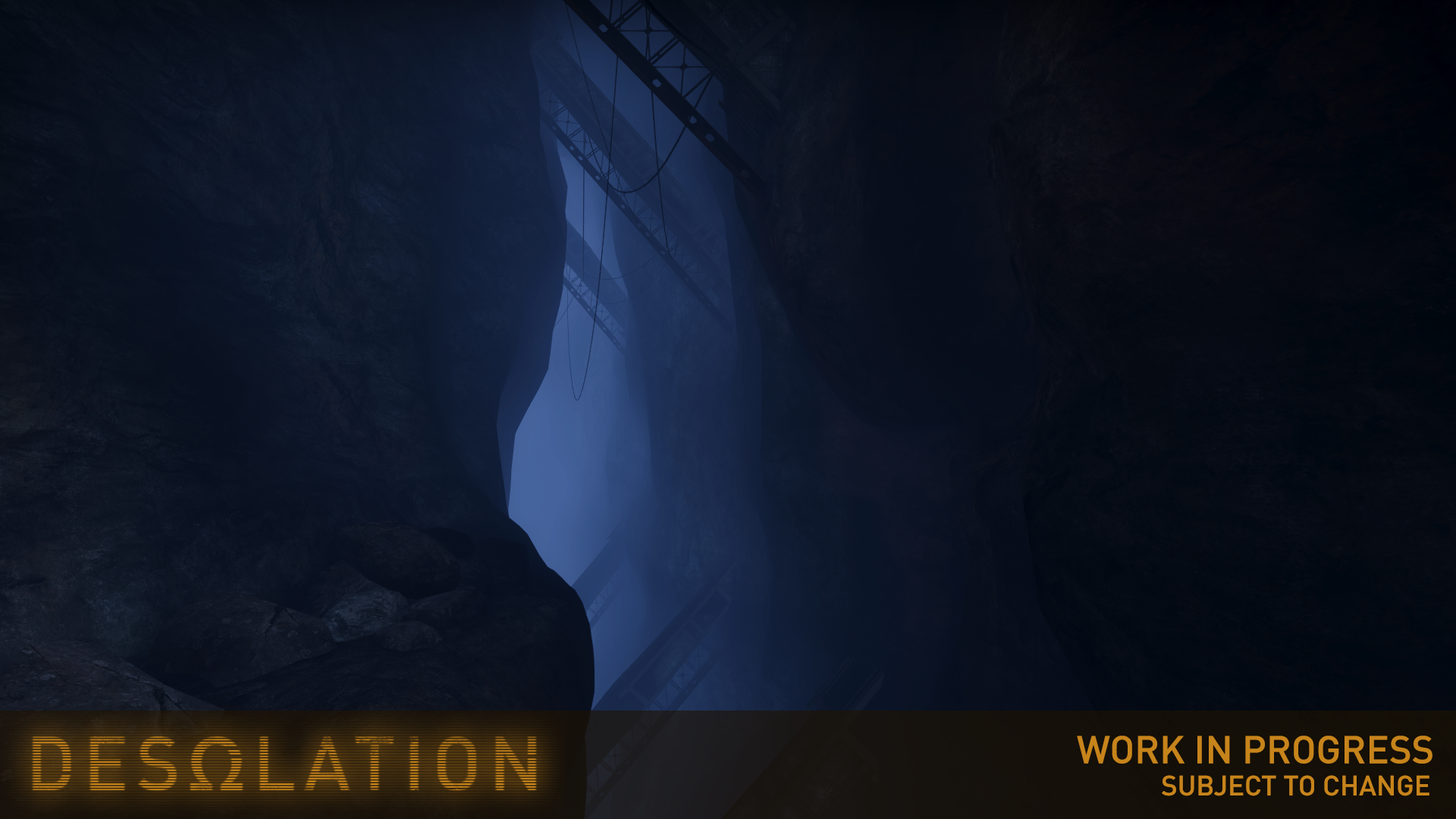 That’s it for this update! Be sure to check back regularly for more articles and previews. We hope you have a spectacular 2020!

its not out yet. give them time

I'm more hyped for this mod than I am for most triple A games I see. Your work is truly impressive and I really look forward to enjoying this mod. Best of luck to you all, I hope 2020 is an even better year!

Thank you very much for the kind words! We really appreciate it <3

This is exciting!
It seems like this mod is coming on really well and the prospect of the cut gel is really awesome.

Wow, mod is looking great. Any chance that it will be released on Steam ?

Yep, it was Greenlit a while ago and will release for free on Steam. Only requires that you own Portal 2.

I was just wondering, do you see this game as taking place in the original portal universe like portal stories Mel did or do you have it take place in another universe?

Our story takes place in the original Portal/Half-Life universe.

This looks fantastic! Very impressive, honestly, and I'm super excited to be able to play it. I filled out the Google Doc as well, so I hope I can help in some way.

Its now September almost November I have been paying attention to this Mod since the ending of 2018 and I am looking forward to playing this. I'm just super excited for this to come out hopeful for the next year even after that.

Thanks for the continued support! The mod itself is still a number of years away from release, but keep an eye out for some juicy updates and sneak peeks soon :)