ECHO development update for 4/11/10. Our first development blog update, where we discuss the importance of a game document and what we are currently working on.

You may have noticed in the past couple weeks a significant surge of new Elysian Games content popping up everywhere. You’re probably sick of getting facebook notifications, twitter updates, and for those of you that know us personally, us pestering you through whatever method of communication happens to be on hand. But hey, gotta get our names out there somehow right? Now that the spring quarter has started back up at AIP, we’ll be harder pressed for time, but don’t expect any slow down in production. If anything, being back in classes has made us even more productive.

Over our short break, we managed to meet up almost everyday (usually over the internet. I highly recommend using Skype and Google Apps.) and used that time to get started on our official game document. I have to say, I was not looking forward to this at all. The game document is probably the single most important document you will create during the production of a game. It will contain every last detail of every last gameplay element, such as characters, levels, weapons, stats, and anything else you can think of. Its not uncommon for these documents to be several hundred pages long. Luckily for us, our game is not as large in scope as a major release, so I think we should be able to keep ours under 100 pages. That isn’t to say it isn’t still a huge pain to do, but, alas, it has to be done. You want to make sure you have all your gameplay elements thought out before moving on to any other stage of production. To produce models and other assets only to realize later down the line that you won’t need them for your game after all is just a huge waste of time, and that is something we can’t afford to do. Also, if anyone has any question about the game whatsoever later on in production, they should be able to pick up the game document and find the answer.


So we pressed on, hours at a time, writing out first the backstory of our game universe, and then the backstory of each individual character. It took a little longer than anticipated to nail down a story that was interesting and feasible, but I think it was worth the extra time. Now that we have a richer story than we originally planned, we can find ways to incorporate that into the gameplay more. Having the backstory to the world and characters allows us to move on to designing the aesthetics of them, so they visually feel like they fit into the story. This is where the team will start to split up to work on separate parts of the game document. For example, Max is currently designing the main character, while Jeremy is working on level design and balancing statistics for certain gameplay elements. Although they are working on these individually for the most part, we all go over the work as a group before it is finalized.

I’d like to use these development updates as a way to help other aspiring game developers by sharing our insight and lessons we are learning while developing our first title. I think the first of those lessons should be “Do not take anything personally, and do not hold grudges”. Arguing is a staple of game development, and that is never going to change. I am working with 3 of my best friends, and we argue (read: scream at each other) over design elements on a daily basis. But once it’s over with, we are back to being best friends. You have to realize that it is nothing personal. Everyone wants to make the best game possible, and everyone has different opinions on how that game should be. Your ideas will sometimes be changed and molded into something completely different from what they originally were. In the games industry, its vital to learn to be part of a team and how to accept criticism(hopefully constructive criticism). Now, this doesn’t mean its okay to be a straight up, for lack of a better term, asshole. Always try to be respectful of each other, and make sure you offer constructive critique and can explain why it is you feel strongly about your opinion. Also, don’t just point out the negatives of something, try to include stuff that you do like about it. Telling someone nothing but negative things about their ideas will just discourage them. Your project will get nowhere if everyone on the team resents each other.

Anyway! We do most of the work on the game document every Sunday. During the week, we try to get as much production work as we can. This is only stuff we can work on without a game document, such as a logo and the website. We had a bit of luck this quarter, which should really help out production. The four of us are all in the same Project Management class at AIP, where we also get to work in a group. The goal of the class is to act as if you are producing a game for a company, and to run an advertisement campaign for that title. Not much of a stretch for us is it? We will be using our website for part of the class, but our main focus will be on producing a teaser trailer for ECHO. So you can be expecting the first official trailer to be released in about 3 months!

One of the biggest concerns we have about this project is that none of us have ever programmed a game before. We decided as a group that we will try to program the game start to finish ourselves first, and if that fails miserably (which wouldn’t be a surprise) we are considering finding someone to help us out with it. There is a ton of material out on the internet that serves as a good starting point to learn from, but for someone who has never coded anything before, learning to program a whole game from scratch is quite an undertaking. So tonight I sat down and started to teach myself basic UnrealScript. All in all I think it went very well. I even started to enjoy it, which was surprising to me. So far tonight I managed to set up the folders for our game, get the engine to recognize our custom content, and run our game mode. I also created our own Pawn and PlayerController to be called on by the engine. I’ll go more into this in another update. Anyway, here is a screenshot of ECHO’s very first line of code! Not very exciting, I know, but to us this is like watching our baby’s first steps. 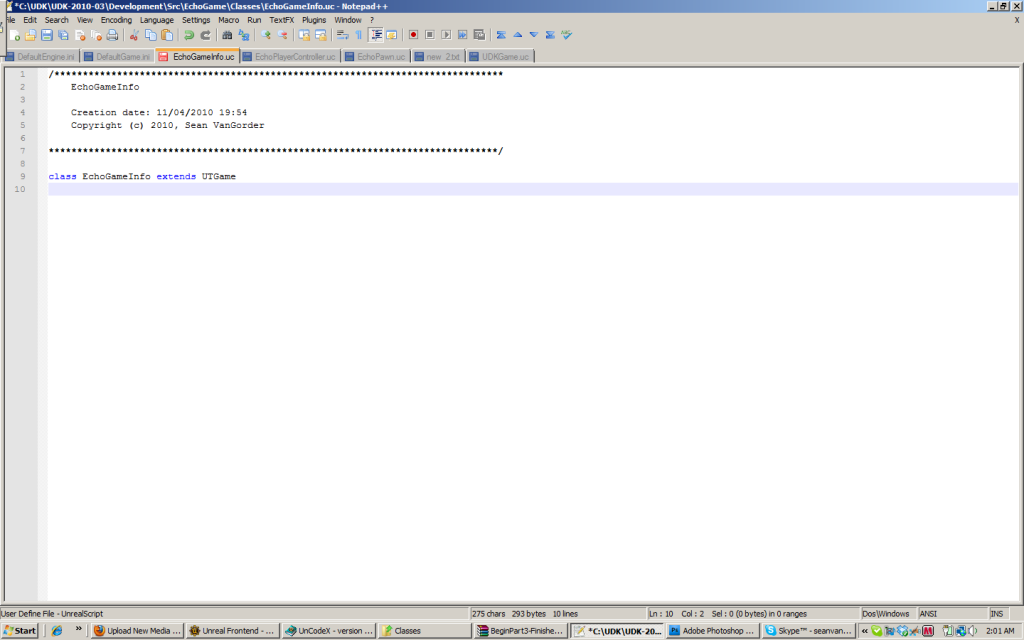 Our first line of code!
So as this is our first development blog, I didn’t really get into much detail about anything. This served as a way to get everyone caught up to where we are now. In future updates I’d really like to go into detail about specific problems we encounter, including technical details and how we solved them. I really want this blog to be a resource for aspiring game artists to use and reference when working on their own projects. So check back every week for another update!