Currently working on the next demo version 1.4 based on feedback and observations from PAX and Steam Greenlight.

Showing Xenno The Rogue at PAX East was awesome for many reasons, partly because I got lots of feedback from people who played and enjoyed the game, but also partly because I got to observe the playing behavior of everyone who tried the game in general. This gave me enormous insight into how people perceive the game itself and how they approached the gameplay, and gave me an idea on how to further refine how the gameplay should be presented for maximum enjoyment with the least amount of learning curve. 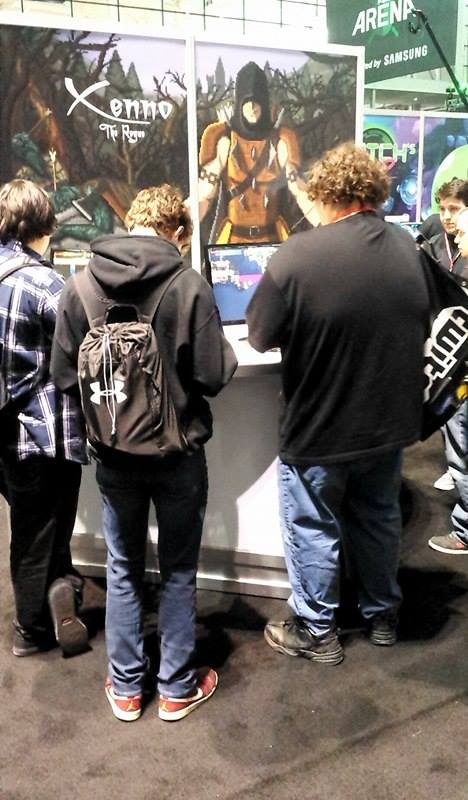 One example of this in particular which stood out to me on the expo floor is that a lot of players did not realize how to utilize the ledge grabbing/hanging/climbing mechanic in a way that made getting up to higher ground and attacking enemies effortless. That first rope in chapter 2 was a particular hot spot for this. Players would climb the rope to where the two archers are walking back and forth, and then awkwardly jump off the rope and try to attack them from the air, only to miss and fall to the bottom and have to climb the rope again, and repeat the same attempt with the same result. I did my best to show them that they *could* keep trying to do that, but to try jumping onto and hanging from the ledge where the archers are until it's safe to pull themselves up, and then light them up with the bow. The game made more sense to them when I showed them this, but it wasn't self-evident to them from the get go that they could just jump to the ledge and hang there indefinitely.

I decided to just take out air attacks altogether (something I felt was pretty awkward anyway), and I plan to add a tutorial popup or two which visually shows them and explains the most effective way of handling that situation.

There were a bunch of other similar observations, all of which I will attempt to address in the next update.

Also coming in the next update is a lot of revamped character animations. One unique challenge when developing a game over the course of years is the fact that your creative techniques improve substantially since the time that you started working on the game, to the point that there is a disconnect between the work you did years ago and the work you just did on the game yesterday. Animation is one place in particular in Xenno that stands out as needing an update. A lot of the older animations are quite stiff and robotic and the next update will feature a whole new updated set of animations for a more dynamic look.