In this blog post I talk about recent graphical developments, and my ideas on Matchmaking and online profiles.

As a programmer, writing updates is much harder than you'd think! I've probably had "write a blog post" on the to-do list for over a month now, but a lot has been happening which competes for my time such as starting a very busy first term of University, plus I just want to work more on the game itself! Anyway, I've finally got round to it.

Graphics
I've spent a good deal of time working on some graphical features of the game engine, such as the planetary renderer. I've tweaked the star flare effects to make the colour less desaturated - In space it would be realistic to make every star white, but I feel that making different star types a slightly different colour increases the games artistic appeal, but do let me know in the comments if you feel the older flare effect was better.

Planets can now have rings, where the planet casts some nice looking penumbral shadows on the rings (in addition to any moons that could be behind the planet), plus the rings also cast shadows on the planet, as you can see in the following screenshot: 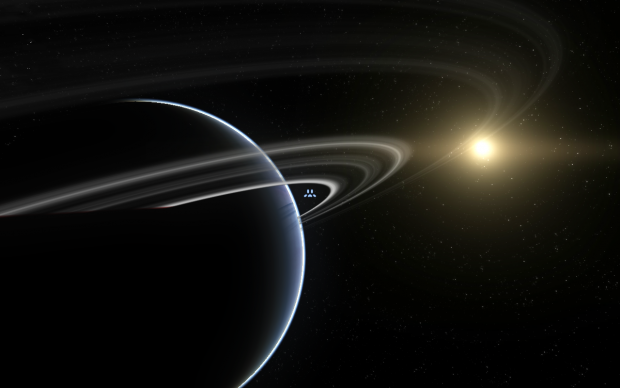 In-game HUD
I've done a lot of tweaking to the heads up display whilst in game, and gave it a colour scheme (which can also be tweaked of course). For example, when a fixed weapon is selected, the crosshair in the centre of the screen will line up with where the bullet will hit, which makes hitting targets whilst moving much easier due to the fact that projectiles move the ships current velocity plus the launch velocity, and if you're strafing then projectiles may not hit what you expect. Additionally, when an enemy ship is targeted and your secondary weapon is a missile launcher, then locks will appear around the edge of the rectangle each representing a single lock-on. Shield and hull levels of the targeted ship are also displayed as two bars. 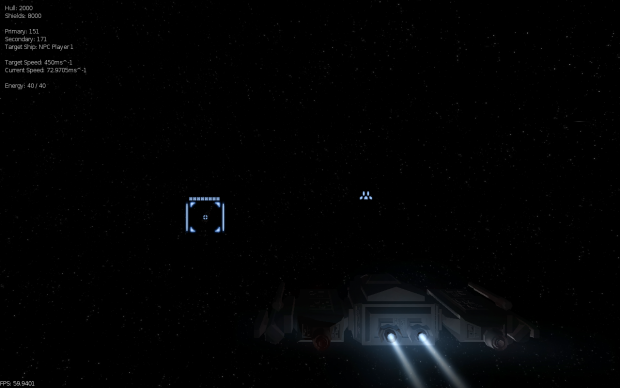 Matchmaking
Work has also been done on the online matchmaking side of things. Transcendent is mainly designed to be a multiplayer game where you can find games being hosted by other players and join to improve your stats and earn some money to further enhance your ship. This is powered by a master server backend that stores your stats and provides a service to publish a game you're hosting for other players to join. Currently, the games directory listing (almost) works and it's awesome that you can quickly start a game and anyone else in the world can join you instantly - assuming the NAT types permit of course.

Obviously this system will be completely optional. Eventually I'll provide hooks for scripters and modders to write fairly decent AI to allow for single player, and LAN games will be supported out the box with no need to log in to the master server. My current idea for local profiles is to have a separate profile to the full online side of the game where you can gain credits and build ships as you can when online, however this profile cannot be used in online games to prevent boosting locally and encourage people to play online! If you have logged in to matchmaking and worked hard on an online profile, I'm also thinking you should be able to use the ships you've worked hard on in local and LAN games even after signing out, but you gain no XP or credits unless you use a local profile. This will obviously be open to discussion so let me know in the comments section.