Some coding, lots of conceptual work, fleshing out of the game universe, work done on test music tracks, and a lot more to be found in this development cycles report!

Hello everyone and welcome to our first progress report under the new branding! This development cycle focused less on coding and more on getting more information about the universe created, more conceptual topics such as menu restructuring and economic system modeling, and work on the audio.

So let's talk first about coding. Not much of any coding was done over the last couple of months as other projects have been requiring much more time than anticipated and also because I wanted to work on some other things other than code. But for what has been done, I have started remaking the station market menu system as described in the first videos of the developer's vlog.

This is a massive task that will require up to 75 new menus and thousands of lines of code so it has been slow going in addition to smaller changes I am making as I go along and think of other ways to accomplish tasks for less code. Other than this the only other code work that has been done is on the test economic system for 0.7A.

Most of the work done over the last two months will not be seen in this, or any article here on ModDB. I have been working on an introductory video that will be used for the YouTube channel trailer. It will be an extremely long video and has taken a large chunk of time to craft the script for (over 30 pages in MS Word).

The other area where the most work has been done is on the audio. I mentioned in the last update I would have updates for the pre-bat track and the test trailer track but I did not do enough work on those to warrant a showing. Instead I have five new test tracks that comprise several different styles of audio. A few are wholly synthetic in nature, one is a possible seed to the final version of the trailer music, and the last one is a percussion-only Battlestar Galactica inspired track.


Another thing I have been working on is creating emblems and shields for different entities within the game universe. I have four done so far and I have also included some basic information in a really cheap styled infographic format (I will be making these much better over the next two cycles).

Here are those, or visit the images section to see them as well: 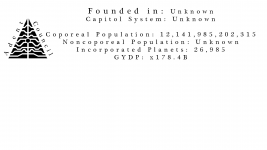 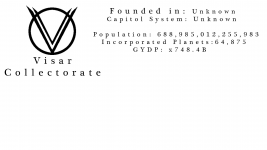 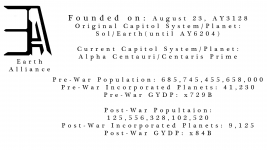 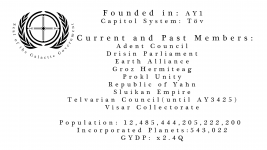 Finally here is the first video of five currently uploaded out of the 16 videos for this developer's vlog:


That is everything for this update. I will have more coding done by the next update and I will also be working on some more complicated test music to try and keep pushing my skills with FLStudio. Thanks for following the project!