Some thoughts about the latest prototype version (v09) of Zwan. You can download it from the Download section.

I was looking at some screenshots of the version 05 when I saw a problem: the coloured fog was flattening our world, especially the mountains surrounding the game field. On the other hand, we couldn’t eliminate the fog for two main reasons: it’s useful to create a deep perspective and its colour changes through the game stages (Eden, Earth, Hell). Federico suggested to introduce some new lights within the game scene and I played a lot with spot lights and point lights, changing their colour and intensity in order to highlight edges and depths. Here’s the difference. 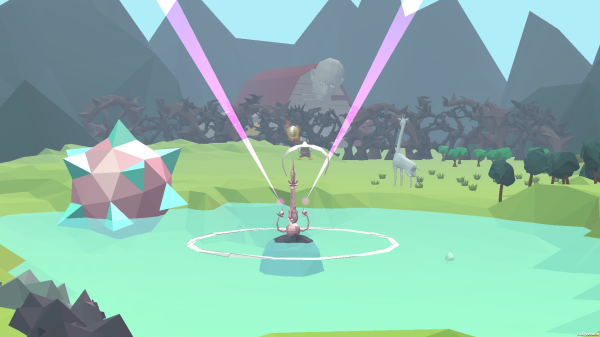 This was the Eden in version 05, with too much fog and no point lights. 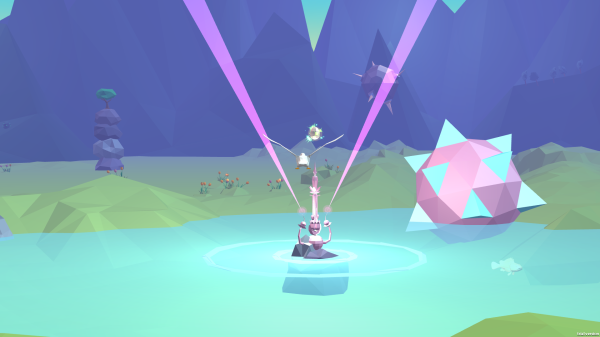 Here we added some point lights behind mountains and one at the centre of the lake.

So I’ve put a lot of point lights among peaks and a few spot lights under the clouds to make them more tridimensional – I looove the clouds and the colour of the sky, especially in the Eden stage – but another thing which help us improving the environment was the skybox. Federico designed three skyboxes, one for each stage: the Eden skybox was inspired by a dawn, the Earth skybox by a dusk, the Hell one was very dark and toxic with gases and dust within the atmosphere. I think the result is pretty intriguing. 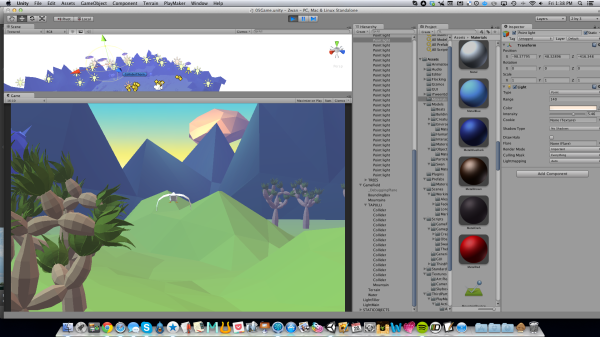 A look at the Unity project, with the gradient as skybox and the spot light under the cloud.

One of the most important features we have introduced in the last version is the soundtrack. As Lorenzo has already written, he mixed this beautiful orchestral arrangement by Lorenzo Marmorato of A Questo Mondo, a song written and performed by Palconudo. We do love this soundtrack because it’s emotional and moving, you can feel all the sadness but at the same time when you collect all the eggs in each stage the music changes and it feels liberating. Our Lorenzo worked hard to synchronise each part of the soundtrack, because a piece of music is activated by the player when they fly by an egg and another one when they collect it. And when you pass through Earth and then Hell, the music becomes more and more oppressive.

We worked a bit on the user interface, even if it’s still a placeholder. In the latest version we also polished the game over screen, adding pieces of Bosch’s paintings linked to the glowing eggs you’ve collected during the game. 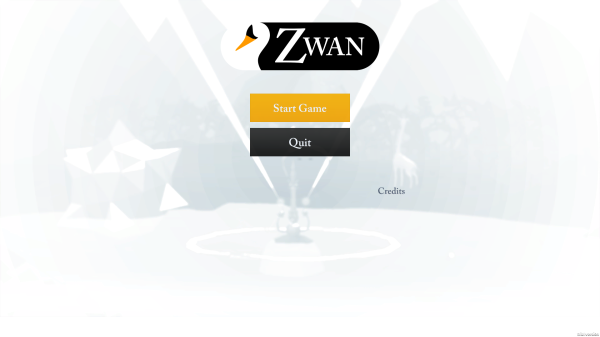 Most of my work during these last few months was to populate the world with the animated creatures Nicola made and with the many objects Alessandra modelled. I’ve put blackberries between thorns, tree branches upon man’s heads, flames all over the Hell stage, dice with legs and fishes with ears: I’ve seen the world as a shire dedicated to Bosch’s mind and heart. Everything in the game was a representation of his works or something new, something inspired by surrealism. We surfed the Internet, and we found artists who looked and Bosch as a source of inspiration and we’ve collected illustrations and pieces of arts on Pinterest. 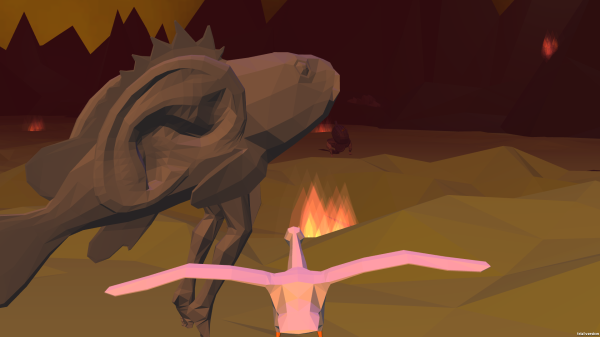 Wait! A fish with two legs? And two ears??

Well, wednesday we’ll be on the road heading to Bosch’s hometown in the the Netherlands. We’ll present our prototype to the organisation (Jheronimus Bosch 500 Foundation) along with 5 other finalist games. After that, a public presentation will be held in October 10-12, when visitors will be able to try all the games at the museum of contemporary art and design. Theannouncement of the winner will be on October 11th. Stay with us, we’ll let you know whatever happens.