Screenshots and details of what I've been working on since my Day 3 development log. 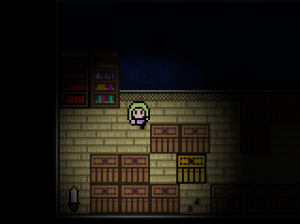 I’ve made a lot of progress since my Day 3 development log. I decided to redo most of the game’s art, and although I am still no artist I think it looks better. All of the functionality for the game is now working properly. This means that I’m now focused on building the levels and actual content of the game, and I’m having a lot of fun! 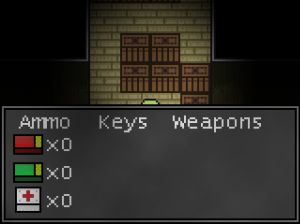 Although I planned to have a Resident Evil styled inventory, it was causing me a lot of problems and I decided to simplify it. Interactions with enemies are now properly implemented. Each weapon has a different attack range and deals different amounts of damage. The player and enemy both have health points, and blood particles are created when they receive damage. 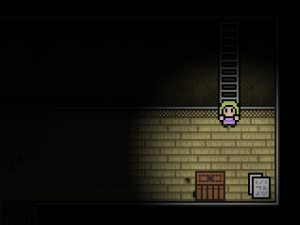 Screenshot with a memo on the ground.

Walking through doors and going up and down ladders now warp the player to new areas of the game, with the game’s events properly saved if they later return to the room. Memos can also now be found, and they offer more details as to the scenario and story of the game. 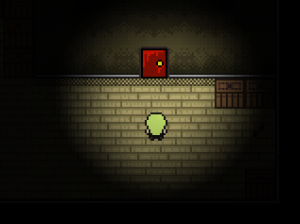 Screenshot with the door to the Red Room.

I’m working on implementing most the rooms/levels of the games in order, however I have skipped ahead and created the ending area of the game, as well as the Red Room. The room and the red door are tributes to Jane Eyre, one of my favorite bands Paw, and Yoshi’s Island. I will post pictures of most of the games progress, however I want to see people’s reactions to these areas when they actually play the game. Having the ending area of the game mostly completed is helpful in making design and gameplay decisions to get up to that point. 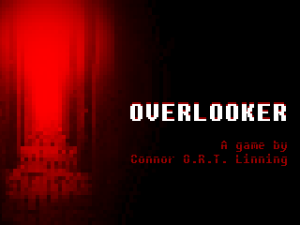 Screenshot of the current title screen.

I’ve received a lot of positive comments on the internet for Overlooker, and I am very excited to see what people have to say about it when it is done. 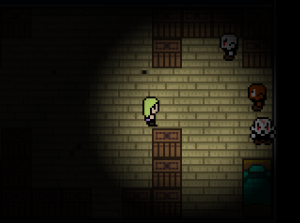 Screenshot of enemies waiting for the player to come within their detection range.

Thank you for reading my second development log for Overlooker!