Announcing changes made during the week, and revealing the custom HUD that's being worked on.

I've restarted working on the mod on Thursday, and here's what's been done:

- Added a proper localized message for Ammo Stealing, instead of a simple (ugly) client message;
- Changed weapons to do a non-charged fire when attempting to charge without having enough ammo;
- Fixed a small bug regarding bot's weapon change priority;
- Nature Buster:
--- Reduced non-charged split angle by half.
--- Charged sphere shots will now split, but each tick will fire 3 shots instead of 4.
- Junk Buster:
--- Increased maneuverability to the returning non-charged shot.
--- Reduced the initial speed of the charged shot.
- Added first custom HUD, right now responding to weapons display. Although ugly, it works perfectly.
- Added basic decals for most projectiles. Nothing custom, but better than nothing.

- Continued work on custom HUD, adding HP/extra HP/armor display in a vertical bar.
- Many changes regarding health/armor:
--- Increased maximum health values: from 100 to 120 for starting health and from 150 to 160 for superhealing items.
--- Increased Health per tick from 3 to 4, to acommodate the changes on health values and match the health display.
--- Health vials now give 4 health instead of 5, also to acommodate the changes and match a health tick.
--- Armors now give 40/60/80 armor, and their respawn rates have been adjusted to the same proportion (10/15/20 secs).
--- Changed Earth charged shot to heal at most half its damage (20, instead of 40).

Most of the Health/Armor changed were made to match the HUD display, but also to be usable when the new classes kick in.

Here you can check two screens of the HUD: 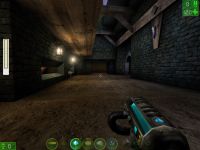 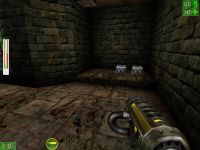 I'll try to finish up the HUD as soon as possible, adding a vertical ammo bar next to the health bar. Then, I may start coding other weapons, so the next release may have two working classes.

The mod has greatly increased in size, going from 1.2 MB to 4.9 MB, thanks to the huge amount of extra textures to allow weapon skins and custom HUD. But still, it's very portable. I don't believe it'll ever exceed 20 MBs, even after being "complete".