We are a month into development and we are starting to see the concept take shape as we flesh out exactly what this will be and how it will be played. Beneath the Waves is an adventure game filled with mystery and puzzles.

Posted by KristerCederlund on Aug 27th, 2017

Welcome to the first official post about Beneath the Waves!

A month into development and we are starting to see the concept take shape as we flesh out exactly what this will be and how it will be played. 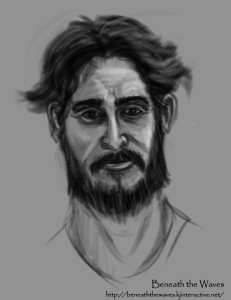 What can we say about Beneath the Waves so early into development? Well… We can say that it is an adventure game filled with mystery.

We can’t really talk too much about our story as we don’t want to spoil anything for you. We can say that we are hoping to write something that will be filled with mystery, maybe even a little scary! Something that will keep you wondering about what it is that hides Beneath the Waves?

Gameplay wise it is greatly inspired by the classic adventure point and click genre. We want to have a bit of a fresh take on it so we are considering how we can do that. Our thoughts now are along the lines of having it play like a 3rd person game where you transition out of action mode and into puzzle mode. The classic adventure games often have a static camera and you go from scene to scene and we are aiming for one location where you can move freely within that space, think free roaming but in a small environment.

Beneath the Waves will take place on a remote island cut off by the tides. We are greatly inspired by Mont Saint-Michel located in Normandy, France. The player, a 35ish travel author are doing and article series about popular tourist places during off season and for reasons not yet revealed takes aim on this beautiful island.

The game takes place in modern day but the popular tourist island with its rich history has the feel of, and aesthetics of a medieval city last renovated during the 30s. 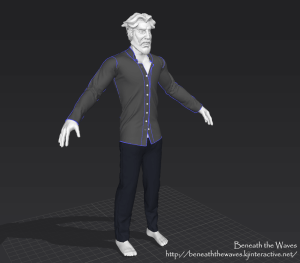 Well whenever it comes to us at KJ Interactive you will have Krister and Jona. Krister being a coder he will naturally handle the programming of the game. Jona as the marvelous technical artist that he is will handle that side as well as being the lead of the graphics people helping them doing what they do to the best of their ability.

We are also getting help from our friends at Red Line Games. Juras is our character artist and he is currently working on the player character that we will talk more about in an upcoming article.

With us we also have Kalle that together with Krister is focusing on the story and dialogue.

Our short-term goals are to produce a demo to test the idea of Beneath the Waves on players to see if this is something you will enjoy and see if our direction with the game will be enjoyable for you. Therefor we are focusing on the beginning of the game and releasing that as a free demo and from there we’ll continue if you enjoy it as much as we hope you will.