Post news RSS Developing with InstaLOD - How it has helped us!

It's all about efficiency, you should definitely be checking InstaLOD out! (And of course, our Dinosaur models!)

I thought it would be a neat idea to dive deeper into InstaLOD, something many of you have asked us about, and how we find it very useful towards our development of Unboxed.

How did HYPERCHARGE: Unboxed benefit from using InstaLOD?

Creativity and Efficiency
As game artists on a small team of indie developers, we work behind the scenes creating as much eye candy as possible for HYPERCHARGE: Unboxed. The core of the job is to be an efficient and creative visual problem solver. The one challenge all game artists must be professionals at is efficiency, and this is where InstaLOD closes the gap in our pipe at Digital Cybercherries to increase our output tremendously. 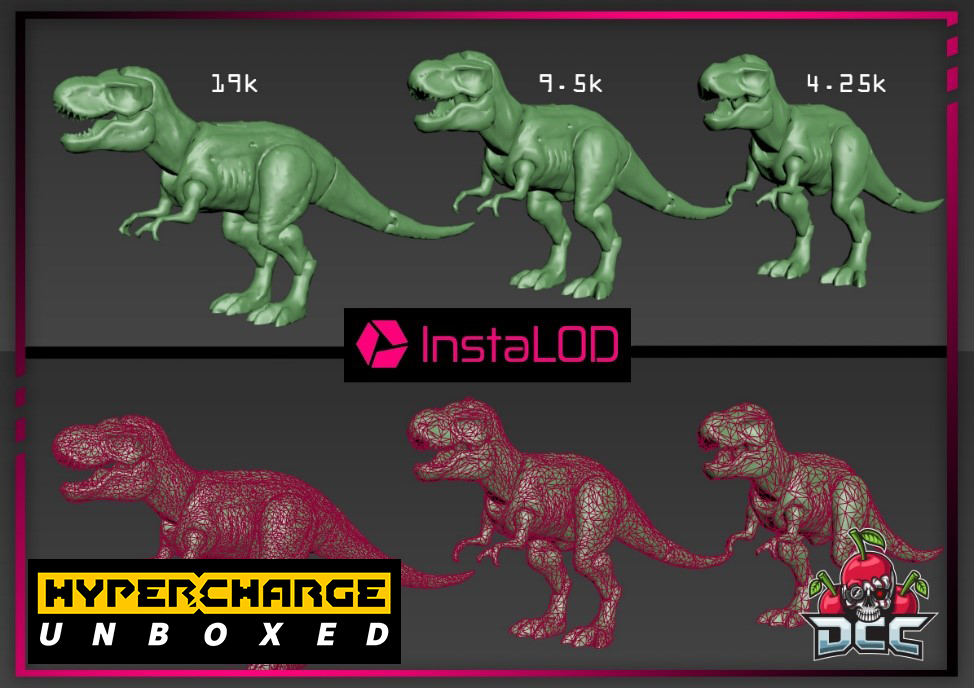 Focused Content
A high profile asset that will require a lot of polish may take a few days to weeks in most pipelines. This is mainly driven by the numerous steps taken to achieve a final game ready asset, but the one’s most time consuming can be the final low poly, UV layout, baking and LOD generation depending on final model complexity. These four steps alone can eat up hours to days’ worth of work. When we can minimize the time it takes to complete those tasks alone with InstaLOD in our pipeline, we are able to focus more on a polished asset on the first run and produce more content. It has been extremely beneficial to our development through and during our Early Access release. Our team was able to stay localized in a single application for the majority of the modeling/sculpting we produced. Focusing on a clean high poly asset with the required detail frees our creativity and decreases stress on crunch time. From the creative size, you now have more free time to experiment and explore the possibilities of a model without fearing how long it would take to model the low poly. There were numerous assets we wanted to have in the game for the Early Access release of HC:U, and without InstaLOD, release could have been delayed. I swear, those InstaLOD guys are pure wizards. They’ve helped to make HC:U possible for our fans and the feedback we have received has been tremendous because we had InstaLOD in our pipeline. 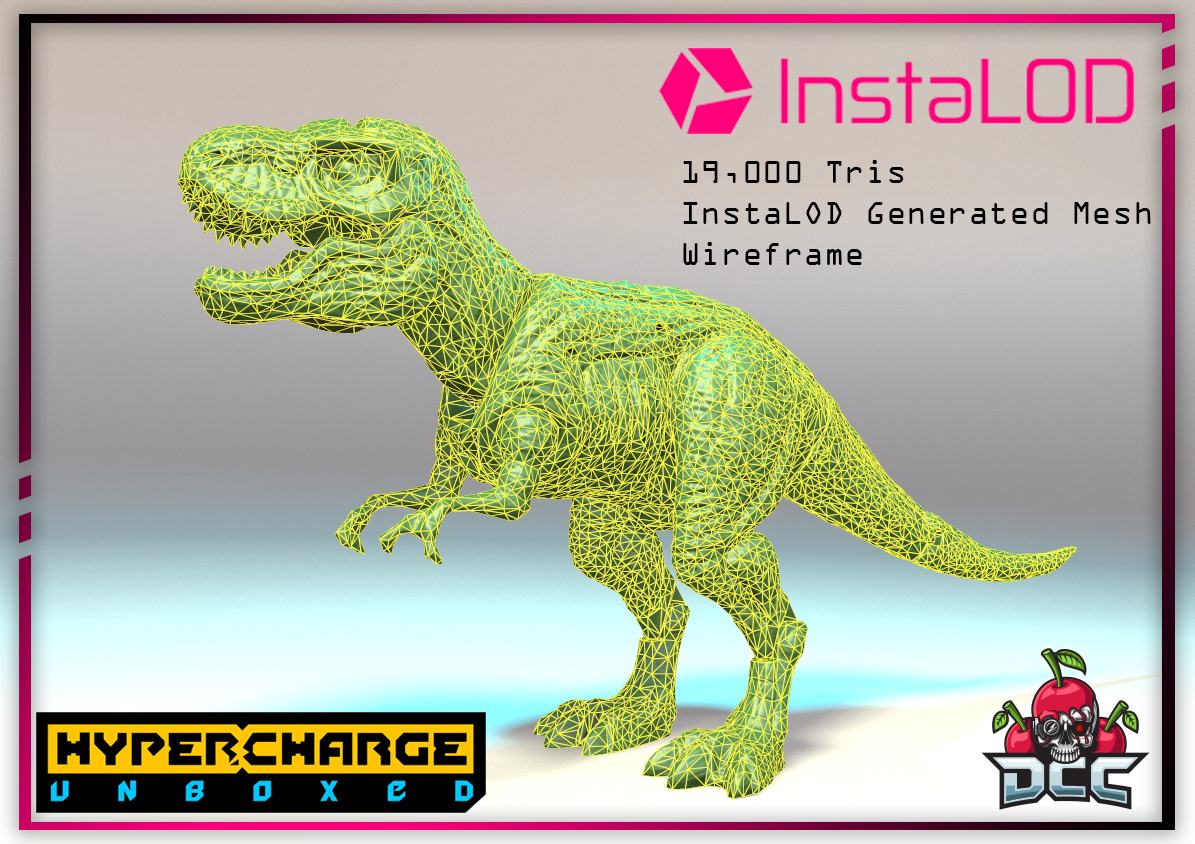 What do we like the most about InstaLOD?
One single thing that makes my lil’ game artist heart go pittypatt is how much love went into InstaLOD’s development. It was genuinely designed and driven by game artists that know the ups and downs in most pipelines and the hurdles game artists face for increasing their efficiency. The toolset is very robust and offers many avenues for creating a final asset depending on your desired pipeline. When working with InstaLOD on Hypercharge: Unboxed, I’ve seen the software continually improve their algorithms and put a lot of effort into an efficient GUI that is easy for any artist to use. 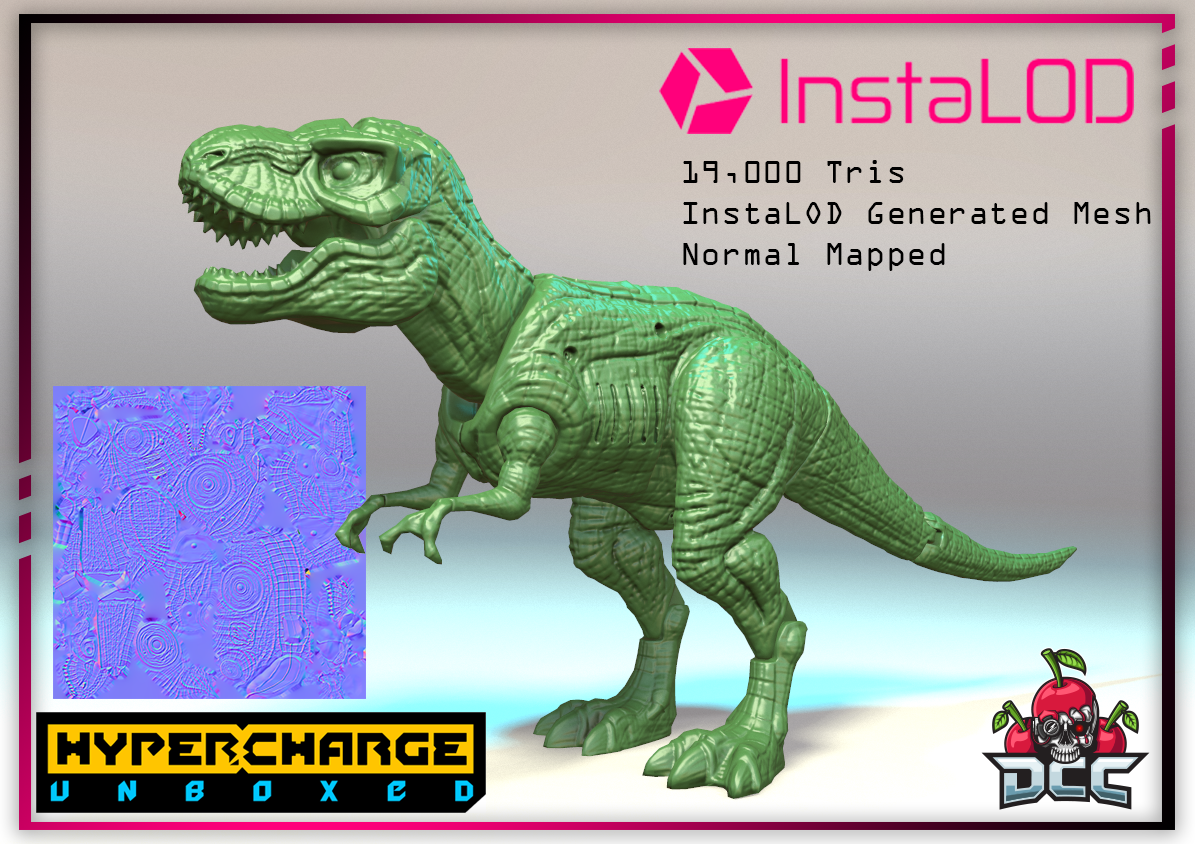 Who here love’s laying out UV’s? Maybe about 10%? InstaLOD’s got you covered with their various solutions for organic and hard surface objects. Another priceless feature when working with InstaLOD on HYPERCHARGE :Unboxed is one of the most boring and time consuming tasks in a game development pipeline; LOD generation. We create a lot of toy assets for HYPERCHARGE: Unboxed that will need to break apart, and those parts still need to hold up in detail regardless of their size. The T-Rex we show here is a great example of how InstaLOD generates a first LOD at a generous size poly count. It’s an asset that the player will really get to see up close (if they can take him down as a team, of course), and when the player gets that close, the model still needs to hold its ground and stay as true as possible to the original sculpt.

Since all games must be optimized for runtime, generating nice LOD’s can be a very time consuming task. With InstaLOD’s numerous features for optimization, you can focus directly on what’s important for each specific asset. In most cases, silhouette is vital to a player’s ability to recognize an enemy, character, watch tower, etc. InstaLOD can generate LOD’s at specific poly counts, a percentage value, and more all by targeting the importance of the silhouette, the texture, the shading model, and even the skinning for skeletal meshes. Combined with the integration into Unreal Engine 4, InstaLOD is easily an indispensable tool in our pipeline. The InstaLOD team is extremely friendly and they’ve created a fantastic piece of software that all game developers should have in their toolset. 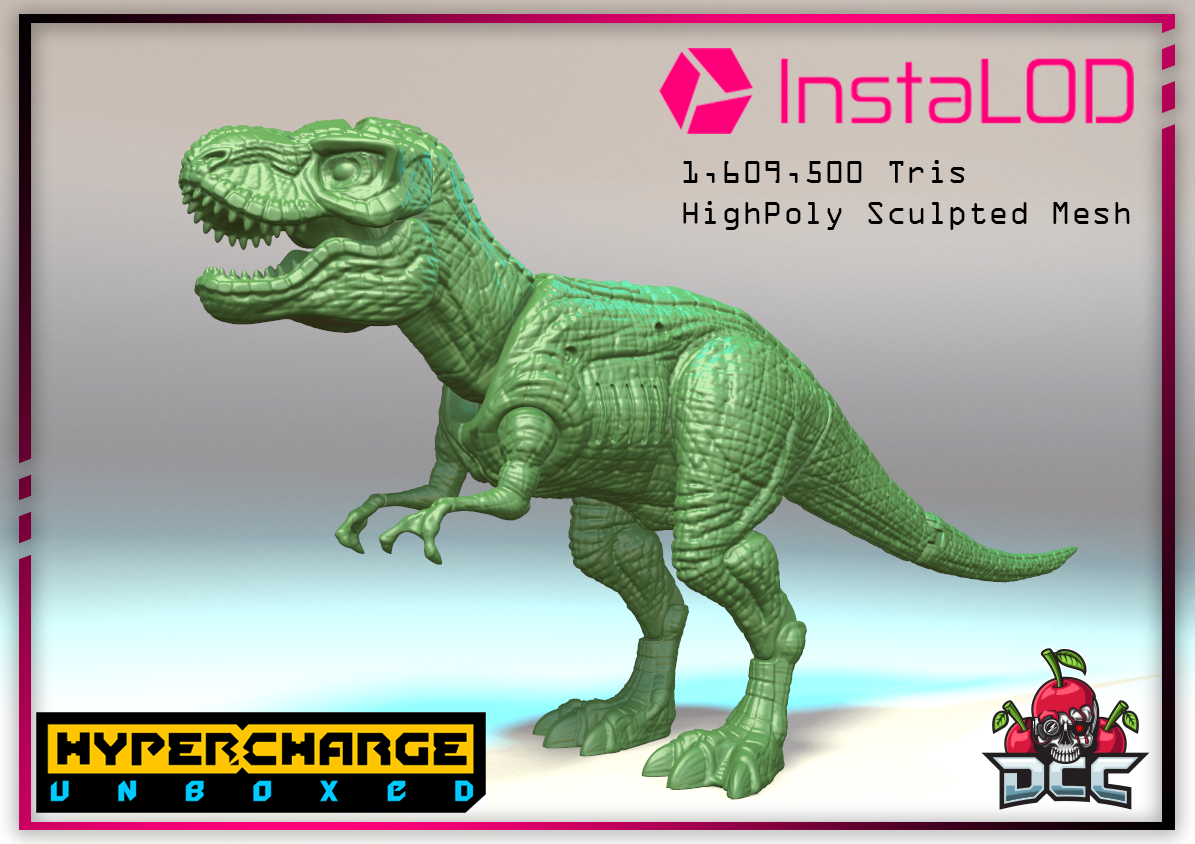 I hope some of you developers out there found this useful.
Your Community Manager Joe and the rest of The Digital Cybercherries team.
Facebook Twitter

Finding out that something like InstaLOD is already on market is huge help for other indie developers.

Wow. That would have been useful to know several years ago. XD Nice, InstaLOD!

A FANTASTIC find indeed! Thank you!

I can't recommend this tool enough. The fact that it does automatic UV unwrapping , AND bakes normal / curvature / etc textures on top of the automatic retopology. I used to use Simplygon but now I'm more than happy with the results of InstaLOD.. The automatic UV unwrap is great for most things but for objects that require more hand care like 1st person weapons, I prefer to do the UVs by hand.