One month into development, Alistair Aitcheson talks about porting Greedy Bankers to iPhone and iPad.

I've been working with iPhone/iPad development for about a month now, and am now well into the swing of Greedy Bankers for iPhone. This post is really a little update on what I've been doing so far, with some tips for people who are also considering game development for iDevices.


Learning Objective-C was not massively difficult, but it is a more complex (or perhaps complicated) language than C# or ActionScript, being a lot more similar to C++. A lot of iPhone development tutorials seem to focus on using XCode's Interface Builder, and avoiding programming. As a game developer, you really do need to code hands-on. So after beginning a few iPhone tutorials to get my head around the syntax, I moved on to using Cocos2D.

Cocos2D is an open-source game framework, which gives you all the things you need to be able to deal with graphics, layered scenes, and other game-specific code in an easy way. Using frameworks is something I've learnt to embrace recently, as it saves a lot of time and hassle, and often helps your game run faster (as they will be developed with efficiency in mind).

The only downside with Cocos2D is that tutorials are pretty thin on the ground. Ray Wenderlich does some good ones that will get you off the ground, and I would definitely recommend using the Cocos2D forums, as there are tons of people there ready to answer your questions.

While the Cocos2D libraries aren't massively well commented (making it hard to pick them a part if you're a beginner), there is a full code reference here - it took me a while to find, but it's incredibly useful.

So far there haven't been many significant gotchas, other than getting the hang of its memory management. Coming from a background in mostly memory-managed languages, this took a while to get used to, but I think I've got it under my belt now.

The Halloween version of Greedy Bankers had a great response from its players, and I had a lot of fun making the special version. Watch this space, as there may be more themed versions in the future... 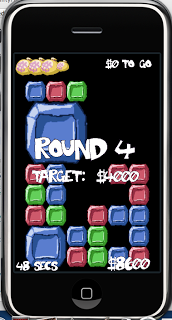 The iPhone version is going from strength to strength. The current version has the gem control well in place, and is even smoother than the PC version. I'm working on the user interface at the moment, and remembering just how much time I spent on this aspect on the original version!

The iPhone version has a smaller playing field, as I anticipated, so that the gems can fit on the small screen without being too fiddly. I plan to make the iPad version allow for a larger playing field, which will use the extra space. Luckily, the smaller space does not negatively affect the gameplay, making it a little more frantic to compensate for it being harder to plan ahead. I'm looking forward to getting test version of the game into people's hands to watch how they approach it.

Attached is a screenshot of the game in progress as it is. Keep an eye out on my twitter page for more screenshots as the game develops.

From promoting Spooky Bankers over Halloween I had some really positive responses from bloggers and game websites, which I'm very happy about.

Square-Go.com gave the game 4 stars out of 5, praising the fast-paced thinking and planning involved behind the simple concept, and calling it "highly recommended fun"

Knights of Indie also enjoyed the prototype, recording a demo video of their experience.

Redwave featured the game on their site as did Indie Game News and Captain-D's PC Gaming Blog.

It's always great to hear people's responses to the game, so I really enjoy getting feedback from people. Thanks to all those who've featured the game on their sites so far!

Greedy Bankers has now been entered into the IGF's Student Showcase competition. Wish me luck! There's been some fantastic entries to this year's competition. Be sure to take a look!