First entry in our developer blog has subtitle „Return From the Dead“, which has a double meaning – the theme of our new project, and our return to game development after more than 6 month hiatus since the release of Warped Christmas, a game that concluded the Warped Times series :)

Greetings to our readers!

First entry in our developer blog has subtitle „Return From the Dead“, which has a double meaning – the theme of our new project, and our return to game development after more than 6 month hiatus since the release of Warped Christmas, a game that concluded the Warped Times series :)

The birth of an idea

And that leads me to the main topic – our new project, which is in its very infancy. Despite that, I trust it so much that I decided to share its entire development process, starting from the beginning idea all the way to its (hopefully) successful release. We were considering a couple larger projects, including an action adventure, but in the end I thought about all of games, both released and in preparation, and tried to see which one would look the most fun in its first impression and I remembered the small action game Hunger of Darkness!

Hunger of Darkness was a small game that won the Week Game Challenge with the topic of Rebirth. You can try the game out for free (we will be glad), but the basic story and gameplay is simple so I can briefly describe it: The main character is attacked and killed by a group of undead. That is where everything starts, and the player wakes up on the ‘other side of life’. As an undead, they only have a single task – find humans and consume them! Using teeth and a stun attack. Health regenerates both automatically and by consuming the bodies. The goal is to get as many points as possible while fighting off increasingly more fierce security forces.

This was exactly the kind of game I was looking for and wanted to play myself. The original game was simple, but the gameplay was always different and required adapting. Even back then, shortly after releasing the original game, I created a prototype of the sequel that remained on my hard drive (still in Game Maker), which will be used as the basis of the new project.

What will be new?

The game will be quite different from the original Hunger of Darkness, both in gameplay and the way it will be realized. The environment will get a new dimension – literally, because unlike its predecessor, the new game will be 3D :). This means it will be our second 3D game, and I believe that this change will give the game many more options and atmosphere, at the expense of additional work for us :)

But what would a game with a nice environment and uninteresting gameplay… Well okay, it’s possible, but not what we want to do :). The main difference will be, that while in the original game the player was placed in the midst of a spread infection, in the "sequel" the player will be in a clean city as the only undead. The first phase will not be about quick action and fighting against hordes of enemies, but rather careful planning and attacking from the shadows. We are planning many gameplay mechanics to captivate the players and keep them interested. Here you can see a small preview of how the old prototype made in Game Maker worked:

The length of the first phase depends on the player’s ability to avoid suspicion. As soon as they fail, the hunting phase begins, where security forces are given the task to investigate the "series of mysterious deaths". The investigators increase in numbers and difficulty, and it is again up to the player to destroy or avoid them for as long as they can, which will give them more points and valuable time.

And finally, all of the chaos in the style of the original Hunger of Darkness breaks out in the final phase. Hiding loses the point, and the player gets into a frantic action in an attempt to survive for as long as possible. The player character can evolve throughout each phase of the game, similarly to the original game – just with more options – and turn into a killing machine. The game ends with an evaluation and classic leaderboards with the best players, and if everything goes according to plan, we are also planning a multiplayer mode :)

We are excited about the concept on paper, so now the only thing left is to turn our ideas into reality :). There is still a lot left do. The biggest challenge of the project will definitely be artificial intelligence of both the security forces and pedestrians, as it will be a key element of the game. I have created a base in the Game Maker prototype, but Unity and 3D space is something quite different :). For now, all I can offer you is a screenshot you could have seen on our social networks – we don’t have the graphics or aesthetic style for the main character just yet, so I used my Minecraft avatar for the time being :) 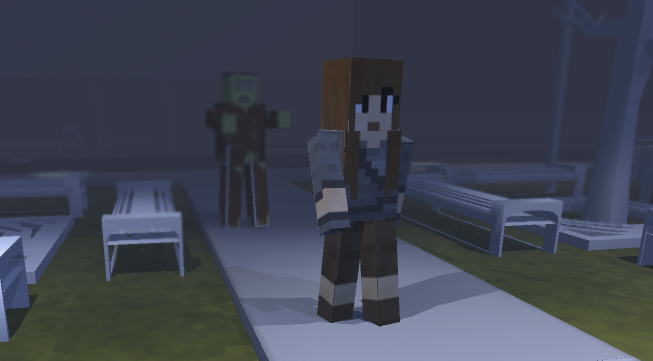 And that is all for the first entry in our reborn Hunger of Darkness, I wish our team good luck with the project, and soon I will be able to write more about our process of creating the environment or detailed gameplay mechanics. We will be regularly posting behind the scenes images on this IndieDB game profile, hope you enjoy them and follow us throughout our journey :)