In about month and a half we will celebrate our one year anniversary since we formed our team and began this project. The February devblog ended up being quite massive and we will talk about themes significant for the community. Of course we won’t forget about the video, discuss feature set, our problems and a bit about game mechanics.


It should be said that we ourselves are not entirely satisfied with the texture quality and effects. Not that this is essential at the current stage (after all this is just a prototype), but the capabilities of the resources we use allow us to make the project even better. The problem is that our team's resources are very limited - we lack many tools, programming resources and, most importantly, time, in order to show off all our capabilities. Recently it has become a really big problem, which we are unable to solve.

As you have probably guessed, the video itself shows one of those late night establishments of the city, which will play an important role in our project's gameplay. To put it simply, this is a concentration of the city's nightlife; a place visited by those who want to forget about the cruel reality. Everyone goes there, from teenagers to business men, and vampires readily abuse this. Fresh young blood, drugs of all kinds, weapons, the black market wares, - if you're looking for something, this is the place for you.


Before we begin talking about the current character editor version, we need to clarify a couple of things:

The possibilities of the current character creation system are quite big at this point. Some of the proportions settings and the exterior elements can be seen right now, but we plan to add much more - piercings, scars, tattoos, etc. Nonetheless, these same possibilities are not limitless and there are certain boundaries when it comes to their growth and flexibility.

The current editor version, just like the ones that we will show in the coming months, is based on the so-called “skeletal animation”. The mass of muscles, the shape of the face and nose, the position of the eyes, - all of this is handled by special “bones”, which are not directly used in the animation of the character; they control only customizable elements of appearance. The problem is that they can only be controlled linearly, i.e. moving them a bit to the left or to the right, which, unfortunately, does not give rich and flexible variations that would look appropriate at any given moment. And there is only one way to solve this problem: 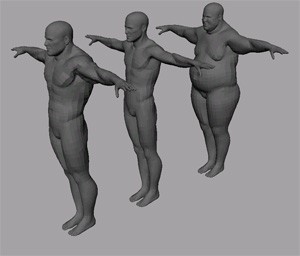 Morphing is a special effect in motion pictures and animations that changes (or morphs) one image or shape into another through a seamless transition. Most often, it is used to depict one person turning into another through technological means or as part of a fantasy or surreal sequence. Often used in games and movies.

This technology allows the editor to quickly change the elements of the settings, restricting them only to models, created by the artist or received via 3D-scanning. This technology is used in almost all modern projects and its wide range of capabilities can be observed in many products that use 3D computer graphics – facial animations, various effects and object modifications.

There’s only one small problem – we can’t use it. Yet. And the reason for that is in the Unity engine itself. The morphing support for Unity is currently in the early stages of development and you can only change whole models, which is not what we want: we need to assemble the characters part by part. To put it simply, in order to implement an editor, which would use this method, our team would require more time (which we lack), more people, and, likely, more funds to buy or rent the programming and instrumental components.

To conclude, we would like to say this: don’t worry, our editor (just as your characters) will possess all the necessary instruments and possibilities, all that’s left is to be patient.


This is what you were craving to know. You were asking us questions and we would always dodge the answer. The time comes to raise the curtain a bit and touch on the game mechanics. Namely, realization of actions calculations and roleplaying system.


The main mass of calculations and formulas in the game resembles existing famous roleplaying systems. Any action that needs any kind of calculations (hitting the enemy, calculating the force of the strike, the success of lock picking, etc) involves a combination of two or more character’s skills and definition of the difficulty for the action being performed. After that the success, and, if it’s applicable, opposition to the enemy action (like blocking) is calculated.

For example, when hitting the enemy via a simple brawl attack, the system calculates your Dexterity and Brawl scores, decides the success of the action and based on these calculations will deal the damage. However, even having high scores in the required attributes, there is still a chance of failing something else. This can lead to missing the target of the attack or ruining the ingredients for the ritual.


The development of your character is not limited by some sort of level indicators. The personal qualities of the vampire are decided by a number of characteristics. These can include his body features like intelligence or strength; or various acquired abilities like fighting skills or occult knowledge. Each parameter has 5 levels of progression that you can increase by spending blood. It is the blood, the most important part of the vampires’ un-life, which gives them an opportunity to exist and improve. By increasing various characteristics, you gain more options in certain areas.

5 levels is the parameter that can be developed by anyone, undead or mortal. However, the mystical nature of vampires means that they can overcome the limits of human possibilities. This means that characters can increase their characteristics over 5, by using their abilities and the powers of the blood.


If you pay attention to what we say on social networks, then you probably know that we have begun to prepare for the launch of crowdfunding company. Nowadays, not many people need to be explained what crowdfunding is, the Kickstarter is familiar to many, but it’s better to be safe than sorry.

Crowdfunding — the practice of funding a project or venture by raising monetary contributions from a large number of people, typically via the internet.

Why are we doing this? Because our team is approaching the limit of our possibilities and continuing the project purely by ourselves, only in free time and without any financial help is becoming practically impossible. Quality motion capture animations, sound, detailed character models and surroundings, their textures and many other specific things that we want to implement, - all of this requires significant financial expenses, not to mention time.

That’s why we want to address the community and the gamers and ask for help via crowdfunding platforms. There are a lot of these resources and aside the already mentioned Kickstarter, there are less known ones, like IndieGoGo or Russian Boomstarter. But even then we have encountered some problems – the most famous crowdfunding platform, Kickstarter, has a very restricted list of countries, whose citizens can create a Kickstarter campaign, And unfortunately, Russia is not part of that list. This is regretful, but there are still other possibilities, though not as numerous:

We prefer the first option and although we’re trying to find the necessary funds, our chance of success is quite low. In any way, we will have to turn to crowdfunding eventually, in order to collect at least $100 000 to continue developing our project.