Thanks for all the support on Steam Greenlight! We’re close to breaking into the top 50, and it wouldn’t have been possible without your encouragement. With determination, we’ve been working on getting more features in, optimizing performance, and getting the game complete.

Posted by maddrifterstudio on Nov 4th, 2016

Thanks for all the support on Steam Greenlight! We’re close to breaking into the top 50, and it wouldn’t have been possible without your encouragement. With determination, we’ve been working on getting more features in, optimizing performance, and getting the game complete.

A feature that we’ve been hesitating to put in was dynamic mesh cutting, due to the lag spike you could experience in the game while it’s calculating it. To get around that, we cut the mesh into pieces before in the editor, save it, and load those deconstructed pieces. This lets us create some unique interactions with the environment, where you could take an object, throw it at a wall, and break it.

Also, using the same framework that we’re using for the items, we apply the same logic to those objects, allowing items to drop from things like pots and boxes.

To add onto the above, we’re experimenting with bombs inside the dungeon. It seems to be working fine, so we’re tentatively going and starting to create some puzzles based around these placed around. 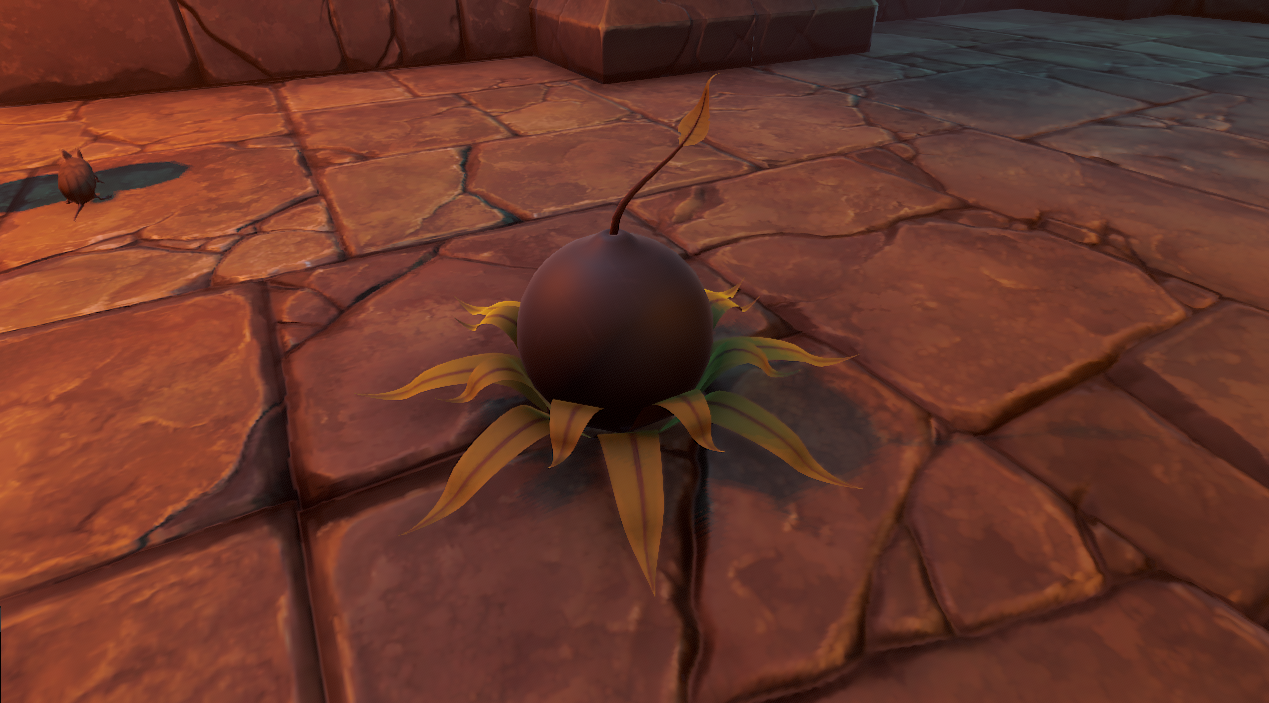 There was some feedback for the AI not appearing to be good, and we took that into consideration. A couple enemies have very straightforward patterns, so, to ramp up the difficulty, we’re working on some alternative behaviors. By adding a bunch of different options for each enemy archetype, we hope it’ll add to a more exciting experience exploring the dungeon. Also, the enemies now will look at targets of interest! And we’ve added a bit physics based animation, shown below on an enemy we modeled.

Our culling solution for rooms is finished! We tried toggling lights on and off, but it didn’t seem to affect the performance too much, so we’re still experimenting with it. An unexpected performance hit was actually in particle systems, and by limiting the active state by view distance, it boosted performance if the procedural generation resulted in too many rooms with particles.

As well, we fixed an issue where placing Terrain objects with rotation enabled would result in upside down Terrains sometimes, which was fun to see, but not fun to play with. We also changed a system to dynamically adjust view distance accordingly - there’s no reason to look 1000 units big in a twisted room of 50 units.

The last notable set of optimizations were done to improve the player experience. We moved the majority of the operations to work async, which means that the game no longer freezes as it creates the dungeon and calculates the navigation mesh.

Think of a floor like a mini trial - we aim to generate each floor from a large sample of rooms, but it’ll be constructed with a theme and an use of a mechanic to traverse it. This way, we can stagger easier stuff to introduce the player into the game, and easily allow more difficult scenarios to ramp up as progression happens.

We realized that the combat does need to be upgraded, and we’re taking your feedback into consideration. There was some mention of Dark Messiah, so we’re looking closely at the combat in that game, and trying to apply some of those ideas to Rogue Fantasy. This goes along with the development of the AI, but we’re working hard to deliver a fun experience. One of the things that we’re already toying around with is a shield, and displacements on the enemies to knock them off cliffs and such.

Once again, thanks for all the support!