The Kickstarter campaign is almost over! Thank you to all involved!

Concrete Jungle is nearing it's final 24 hours on kickstarter. The project has found incredible success, and has been funded to the level where I can pretty much include everything I can think of offering! It's been a crazy journey- when I launched the campaign I was confident the project had a pretty good chance of hitting the goal, but I didn't imagine this level of success. It's great to see Kickstarter is very much alive for the smaller scale developers!

To reiterate what's on the page, the extra funding will largely be going towards expanding the game for free after release. This is to minimize the risk of the game being delayed due to addition of the extra content. +50 more buildings are planned on top of the original target of 150, as well 2 more characters. Night mode will bring an awesome alternate visual style to the game. The soundtrack will be expanded to include some original music, and the story mode will feature voice acting. Lastly, some of the extra money will go towards localization of the game into (at least) French, Spanish & German.

To everybody who wants the game to come to Linux- your desires have been noted. It's something I want too, but I'll look at it after release. The same applies for other potential platforms such as iOS, Android and Consoles.

There's a couple of places where you can discuss the game- the ColePowered forums, the brand new Concrete Jungle facebook page, the Steam discussion boards, here on IndieDB and last but not least the game's official Wiki on Gamepedia!

I'll sign off with the latest addition to the game- Concrete Jungle's version of the Chrysler building (yet to be named). 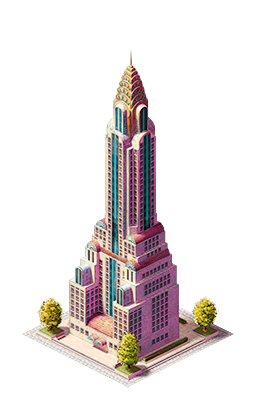 You should call that building Casino or something similar; I'm getting that kind of vibe off it. Fancy Hotel maybe?

Unless you want to do a more elaborate Vegas-style casino at a later date, or there's already one in the game and I just missed it.