Hello Adventurer, ready for more one devblog? Today we’ll talk about the HUD in-game during missions, explaining the all elements and their respective functions. Don’t know what is a HUD? That’s okay, we’ll explain.

Hello Adventurer, ready for more one devblog? Today we’ll talk about the HUD in-game during missions, explaining the all elements and their respective functions. Don’t know what is a HUD? That’s okay, we’ll explain.

Before you begin, let’s explain exactly what is HUD, according to the Cambridge Dictionary, we havethe following meaning:

Abbreviation for head-up display: in a computer game, the part of the screen that shows information such as the player’s score, how much time they have left, etc.

So we can understand what basically is a HUD, but in simple terms, it’s basically the screenelements that show informations to players, such as points, lives, time, and etc.

Now let’s go to what you wait for, let’s introduce the HUD in the phases and missions.To ensure a better UI (User Interface) we made it pretty minimalist, so you won’t have a lot of information to disrupt the player or take off the focus from the phase. 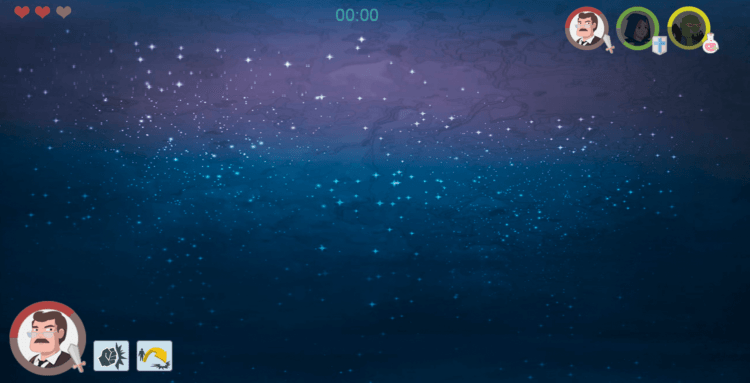 In the upper left corner we see the remaining life of the team. When anyone of the three main characters dies, the team loses a life, regardless of which hero died.In total we’ll have three lives, when there is no remaining life, the mission ends and go to the game over screen.This is very original, isn’t it? What do you mean with “no”?

Still at the top, we have the icons of the characters and their particular functions (which we’ll explainin detail below).
Each icon represents a hero present in the current team, where the only highlight is what is currently selected, and the greys are the other two who are sad for not beingchosen to represent this devblog.

Below we have a character alone in the spotlight, followed by two rectangles and again a functionicon.
This character is who we are currently controlling, in this case the attack. The two rectanglescorrespond respectively to primary and secondary skills.
Each one will have their own arts, that is, although it has the same function, the icons for skills will change according to his personality, appearance and history.

*These two retangles are provisional arts

t’s time to explain those icons that appear all the time, doesn’t it?

Has the ability to attack in short and long-distance. In the case of the character of the image, hitting with a book or fling it.

Has the ability to protect with shield or create a barrier.In the case of this heroin, a magical shield using the stick or a mystical energy barrier.

Has the ability to interact with the map and enhance yourself (speed and double jump).In the case of Grawh (our dear Orc Hacker), invade the stage and do a hack to his attributes.PS: Grawh will not be banned.

As a spectacular detective I know you are, you should have seen that lack only talk about the clock on the top. Well, he will mark how much time that the mission is being played, both for in the future ensure a good position in the rankings and to be used to give the final score of the level.

If the player chooses a cleaner version of the screen, it may hide the time at any time of the game.

That’s it for now, in the future we will make more devblogs showing the other graphical interfaces of the game, as the menus and level editor. Want to know when will happen these blogs?Simple, just follow us on our social networks to stay on top of everything.