An update on the progress of Workshops, and some plans for the coming months.

(If you're interested in The Frontier, please help support it by voting for it on Greenlight. It really helps out. Thanks!)

Hey everyone! I'm back with another update roughly a month and a half after my last one. It took longer than I had hoped, but it's still a shorter interval than my previous update. So hopefully I can continue this trend and further shorten the span between each one. For today's update, I want to share some of the progress that's been made on workshops. 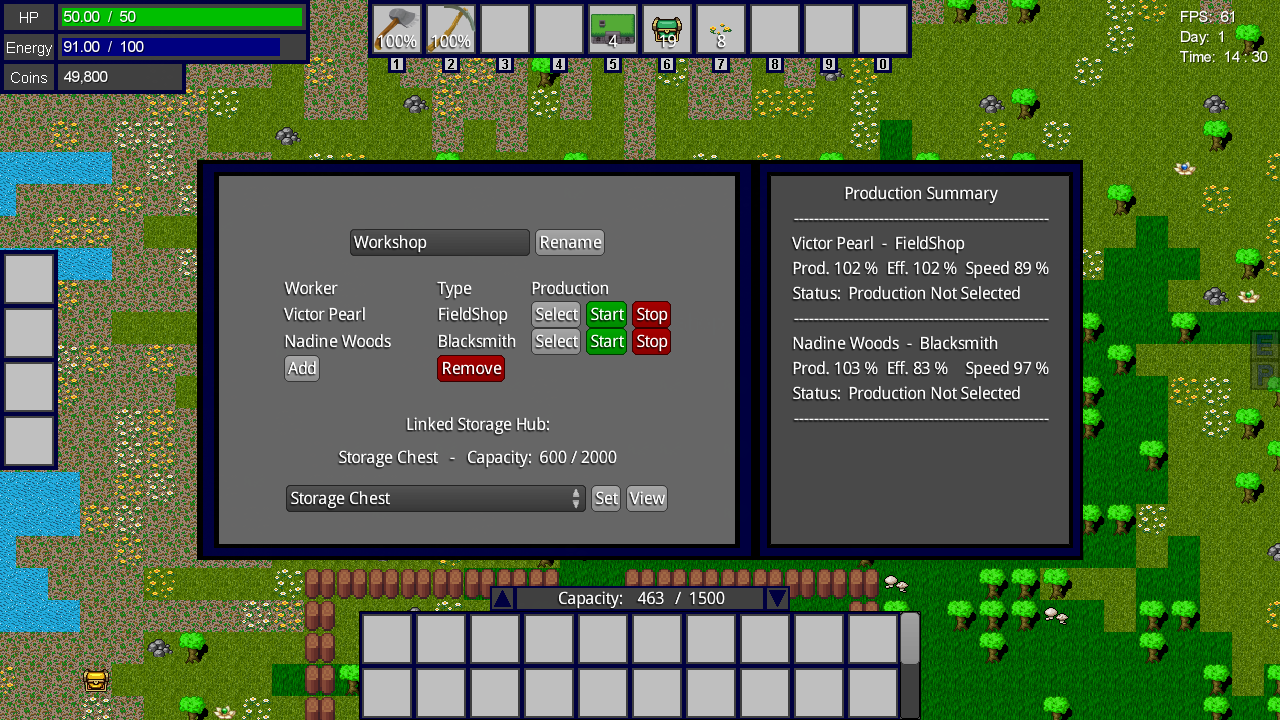 So this first screenshot is showing the Workshop UI with workers and a storage chest set to it. This is actually showing the same thing as the last screenshot in the previous update, but you might notice some changes. The first difference is under the production section of each worker. Instead of a drop-down list, I've added a button labeled Select. When clicked, this will bring up a window to choose your production item from. This change was necessary because the drop-down list couldn't display the amount of items and info needed (as you'll see in the next screenshot). The second change is the Production Summary on the right, which was largely empty in the last update. This section will display information related to each worker's production. 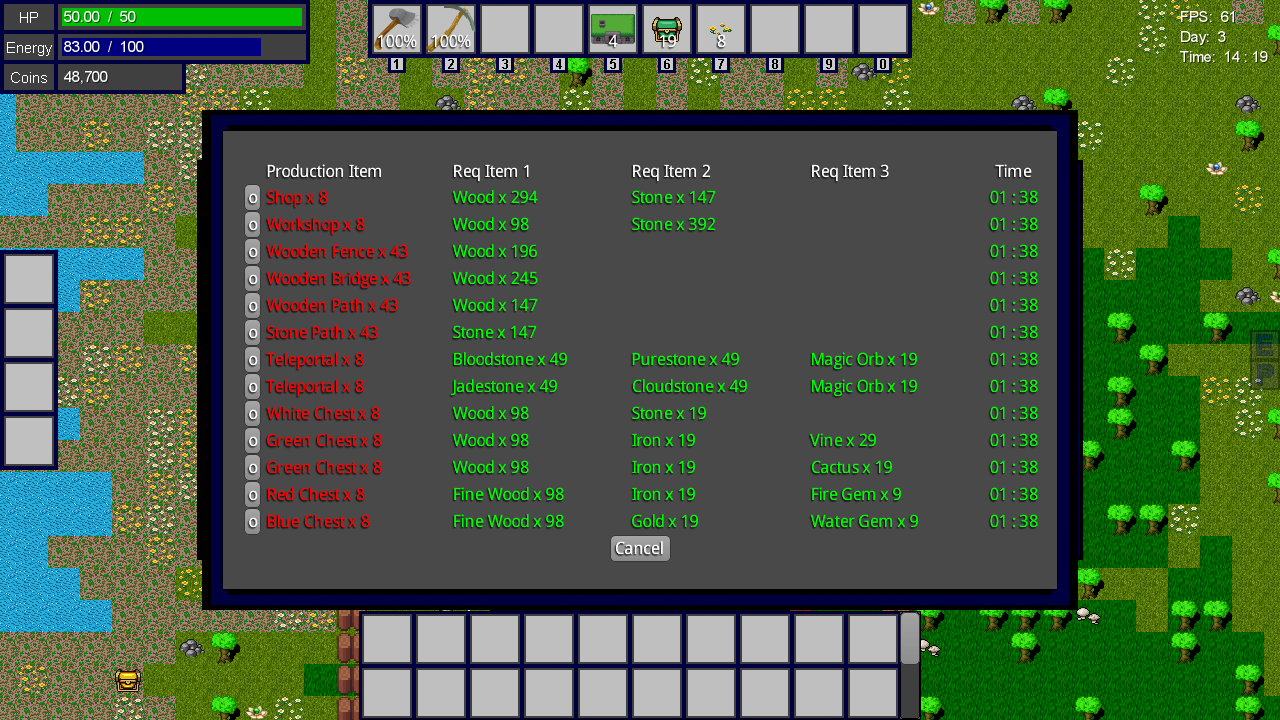 After clicking the Select button for one of the workers, a list of the possible production items will be displayed. The first column lists the production item and amount, and the next three list the needed materials and amounts for producing that item. At the far right is the time for one production cycle (the times aren't balanced yet). The items and amounts are tied to what the corresponding specialist can craft, but the amounts are being multiplied by 10 to allow for the bonuses to take effect. You'll notice that some of the text is red, while others are green. This shows what the worker's positive (green) and negative (red) bonuses are affecting. Due to a poor production stat, the worker can only produce 8 Shops per cycle instead of 10. However, due to high efficiency and speed stats, the amount of materials and time required per cycle is being lowered. When starting out, try to find a good balance that allows you to train and level up your low stat workers without taking too much of a hit to your production. 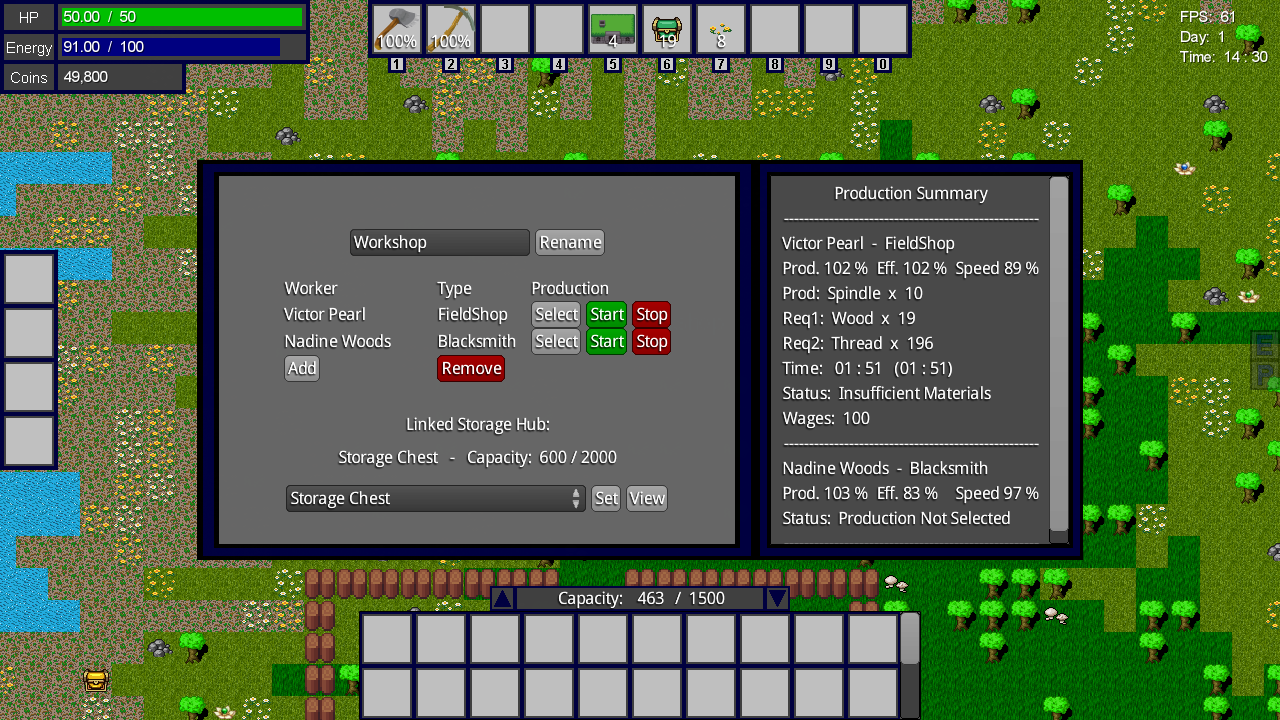 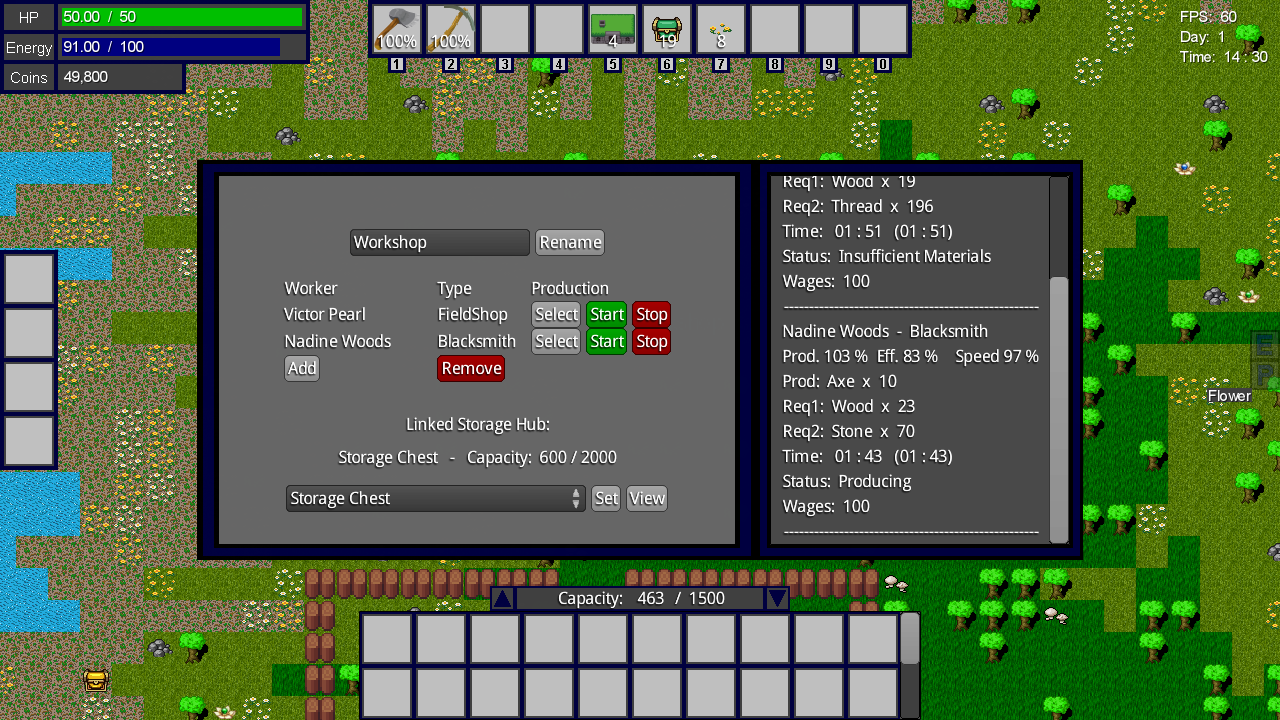 The remaining screenshots will be about the Production Summary section of the Workshop UI. The top screenshot is displaying information for the worker (Victor) after he's been told to produce Spindles and the Start button has been clicked. However, if you notice on the Status line, there are insufficient materials in the linked storage. In this case, the worker will continue to check the storage for the needed materials, and once he gets them, he'll start a production cycle. In the bottom screenshot, the worker Nadine has been set to produce Axes. Since the required materials are in the storage, the status is set to "producing" after the start button is clicked. If we leave for a bit and come back (the game is paused when UI windows are open)... 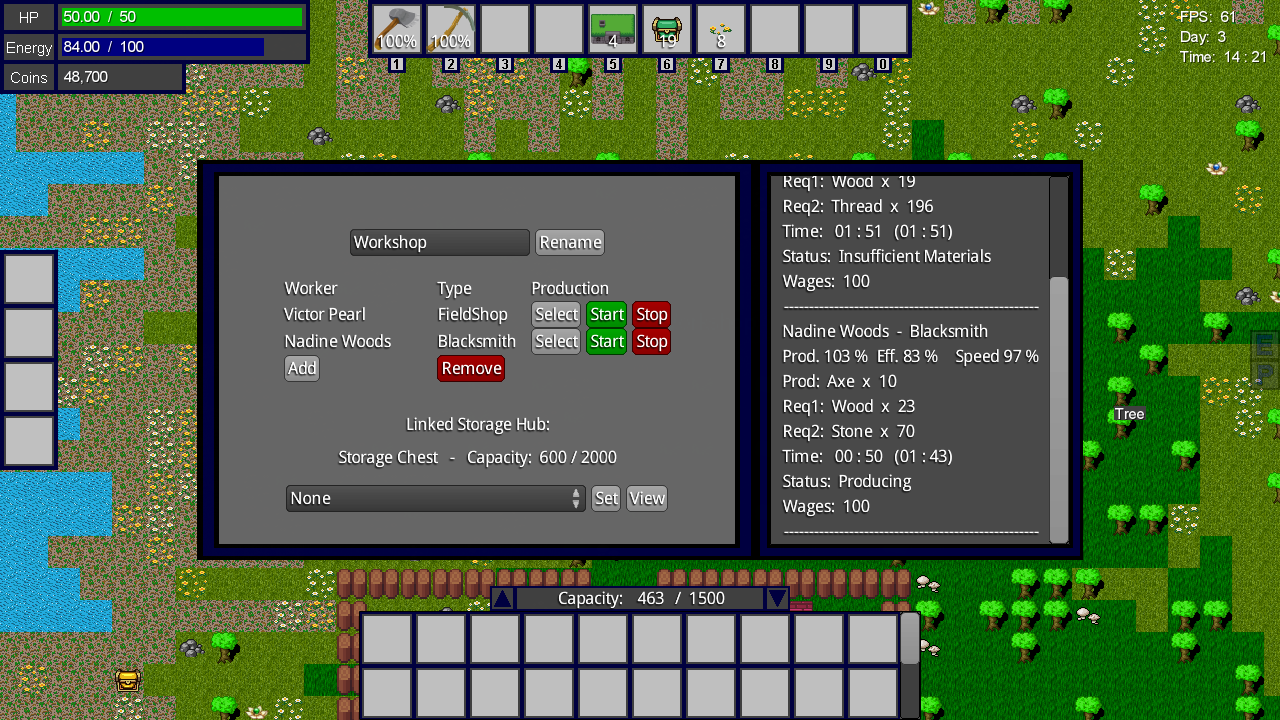 You can see that the time has decreased for this production cycle. When the cycle is finished, the produced items will be deposited into the linked storage and the cycle will start over again (granted sufficient materials are available). When I later introduce raw material workshops, you'll be able to set up a fully automated production chain. The raw material workshops will work similarly to regular workshops, but instead of producing items from materials, the workers will be harvesting material items. Some of these will be required to be placed at specific locations, such as the coast for fishing, or a mine for mining. Others will be simpler and just require a certain amount of open land, where the workers will automatically grow and harvest things such as trees and vegetables (e.g. mushrooms and pumpkins).

Well, I hope you all enjoyed this update. Like I mentioned in the summary, I wanted to lastly touch on some future plans for the project. I still have some more work to do before the workshops are fully functioning, so my next update will be about their completion. I'm thinking about making a video showing how the workshop system works in-game for that update. After that's done, I'm going to work on a new demo version. In addition to workshops and workers, I want to fix/improve a lot of small things about the game to increase its playability and enjoyment. This will include fixes based on the feedback I've gotten from people who have tried out the demo. So if you have a small fix/improvement you'd like to see in the next demo version, please post your comments here or over in the Greenlight page's forums.