Semi-long update on what's going on with the project, and what I've been up to these last several months.

Hey everyone, how've you been? It's been a bit over 3 months since I last posted anything for this project. I apologize for the long delay in updating. Today I'd like to explain a bit about the status of the project (no worries, it hasn't been cancelled), and I have some new stuff to share as well.

So first off, why the long delay? Long story short, work. For a bit under a year up to around when I put The Frontier on Greenlight, I was able to work on the game full-time. Shortly after I put it up though, I needed to make a decision regarding the future of its development and my finances. Turns out, not getting paid to do something is a hard way to make money. So I had no choice but to go back to work. After looking around for a little while (I initially wanted a part-time job to allow me to have more time to work on the game, but I wasn't able to find one that would quite work out) I landed a full-time job at another Japanese game company, although this time dealing with localization instead of game design. So unfortunately for the project, I have a lot less time than I did before to work on it. I want to be clear though, this does not mean that the project will be canceled, or even stalled. I'm still working on it, albeit at a much slower rate. So I'm very sorry to those of you who wanted to see a lot more updates come much sooner. I ask that you all please just bear with the slow, but hopefully steady, stream of updates going forward.

Moving on to the little bit of new stuff I have to share. I'm still working on workshops and its related components, such as workers. I'll post some screenshots below and explain a bit about what it's showing and its related features. 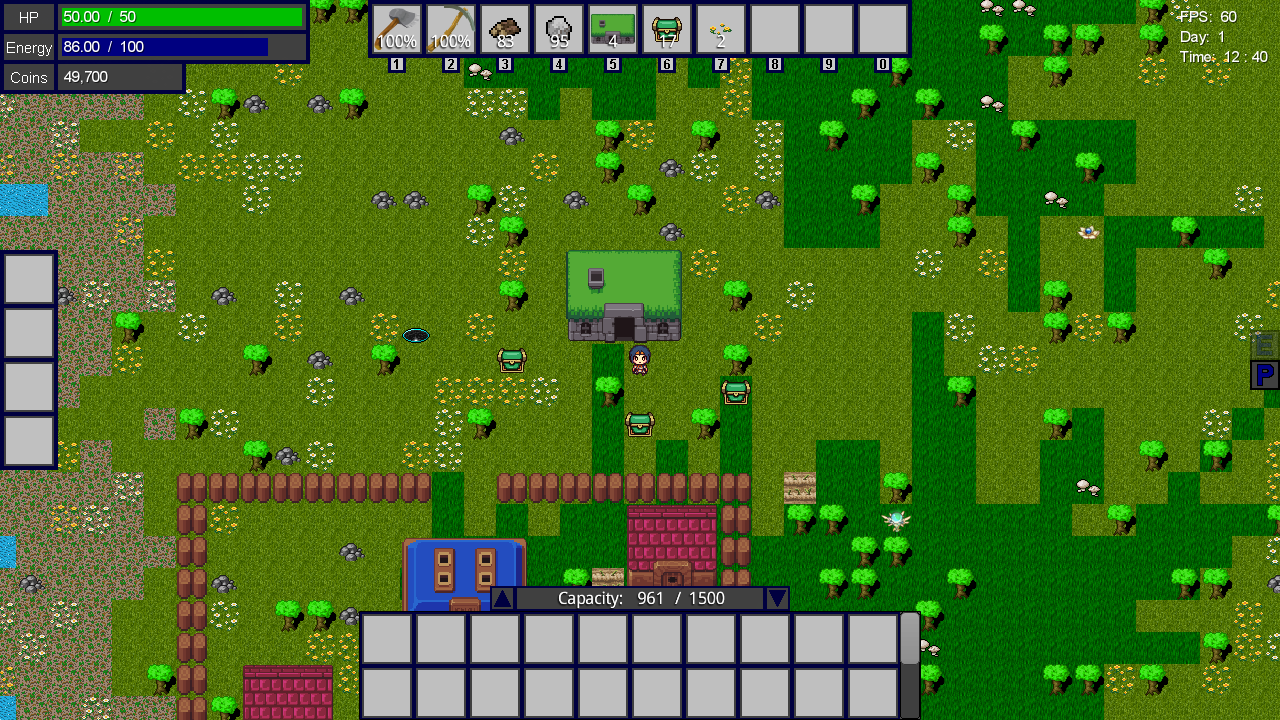 Here we have a workshop placed in the middle of the screen with three green storage chests placed around it. Originally, I was planning on having each workshop carry its own inventory/storage, but then I realized it'd be too tedious to move inventory around when you have a large number of them. So instead, I'm going with a system of hubs and linked storages. Each workshop will be able to select a nearby storage to link with, and this storage will then act as the workshop's own inventory. Multiple workshops can link to the same storage, which will in theory, lead to the building of hubs around the map. In other words, you can build a single storage (best to have one with a large capacity) and surround/link it with related workshops. Then you can connect this storage to another hub somewhere else to link up your production line. This will probably turn out to be the preferred way of building your production chain. 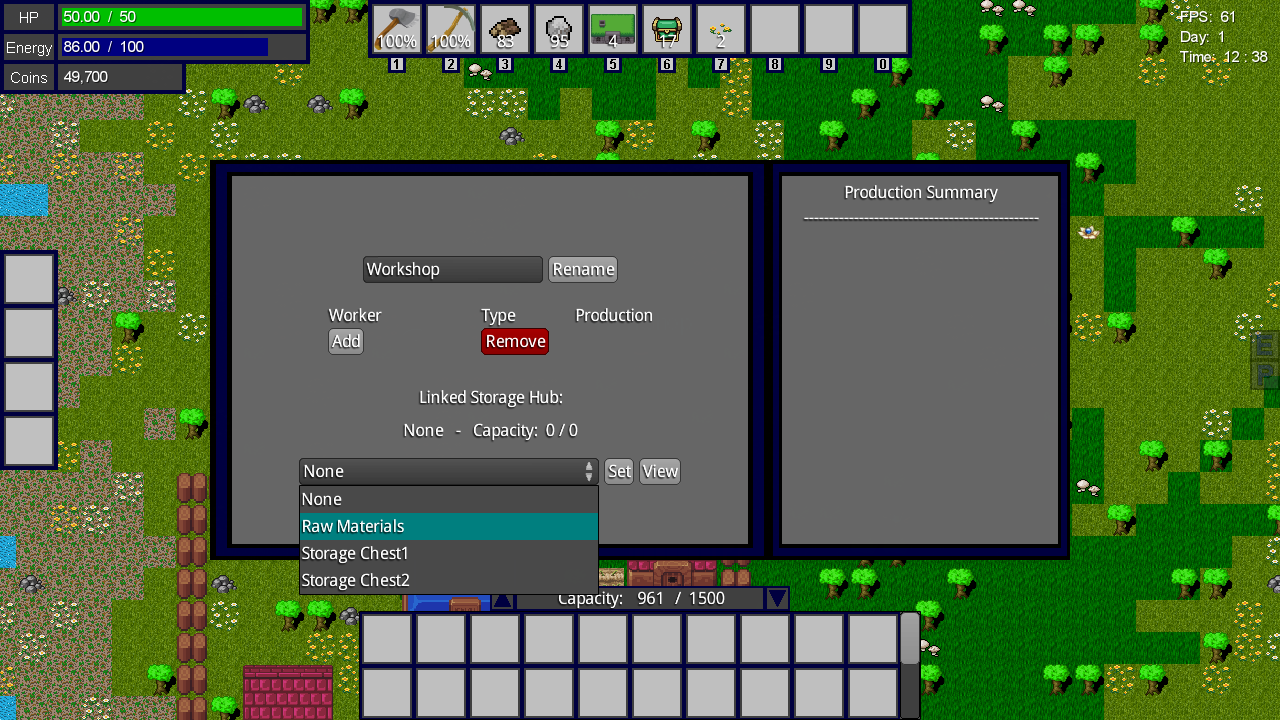 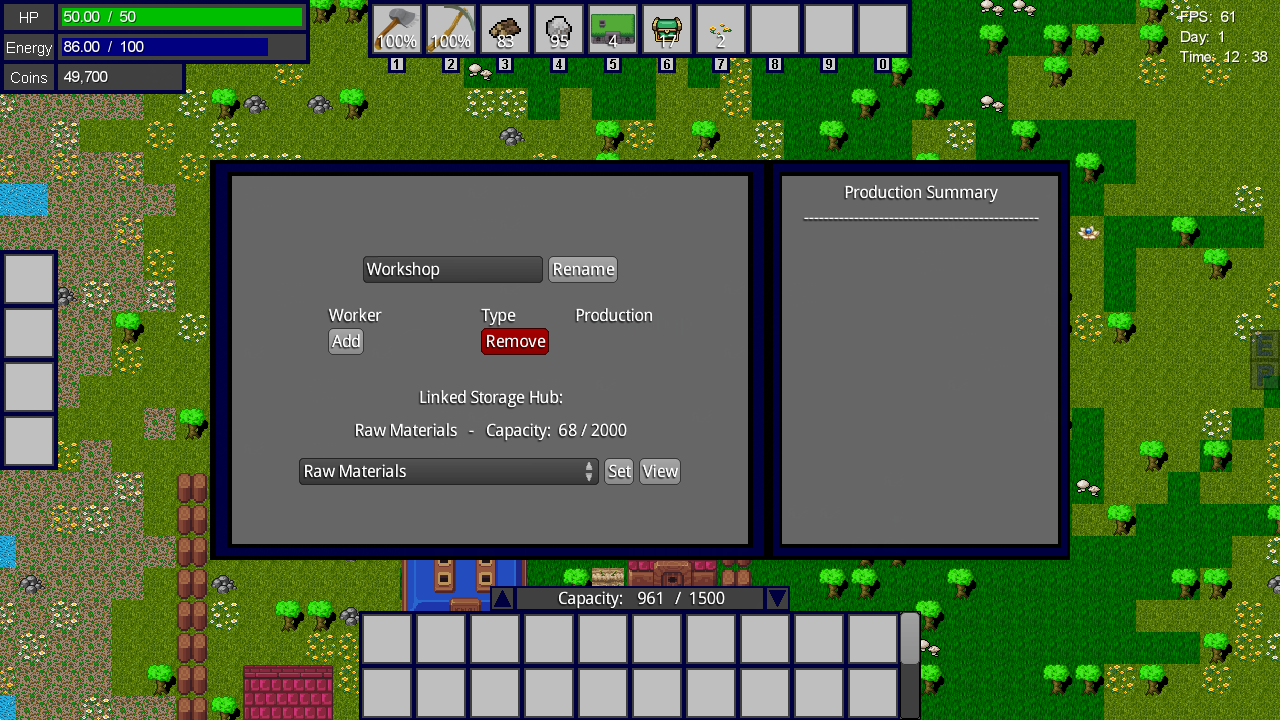 These two screenshots show the very rough workshop UI (still working on it). The top SS shows the drop-down list allowing you to select which storage to link the workshop to, and the bottom SS is after a storage has been set. There is a limit to how far away a storage can be in order to link with it, which will in turn affect the size and layout of production hubs. 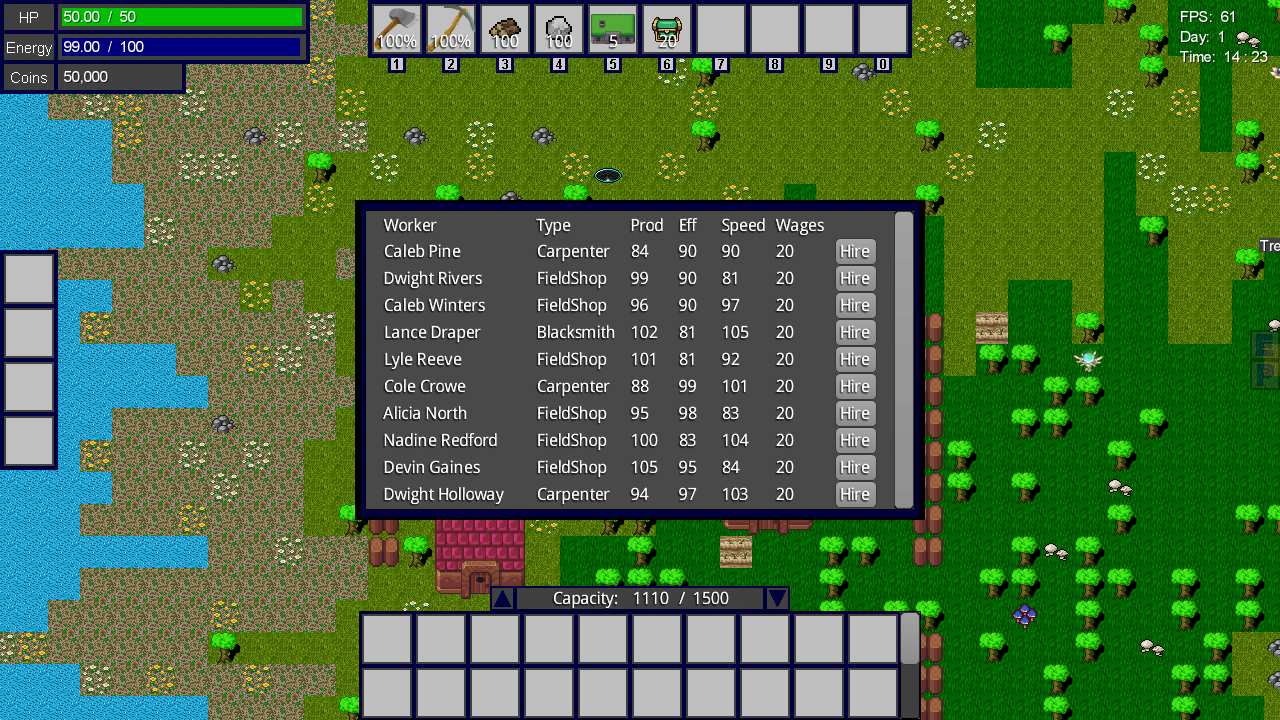 Here is a list of workers available for hire (currently accessible from the Market). The list and workers are randomly generated each day. I've expanded and altered how I originally wanted the worker feature to work, which will, I think, make it much more interesting. Workers have a type or class that corresponds to the different Specialists. This will limit what that worker is capable of producing to what their corresponding Specialist is capable of making. Workers also have three stats: Production, Efficiency, and Speed. The numbers are a percentage, and are also randomly generated when the worker is first created. Production will increase/decrease how many items are produced, efficiency will increase/decrease how many ingredient items are needed, and speed will increase/decrease the amount of time needed for one production cycle. Workers will also need to be paid wages.

Now, you might be wondering, why would I ever want to hire any worker with a stat below 100. Good point. There are two more aspects of the worker feature that I plan on adding that will sometimes make it worth hiring a low stat worker. First is experience and levels. I plan on having workers gain experience as they produce things at your workshops. When they level up, you'll be able to choose which stats you'd like to increase. I also plan on adding worker skills. These can be learned and replaced as the worker gains levels, up to a certain limit (probably 3). These skills will provide a variety of bonuses (sometimes a negative bonus), such as a large boost to a single stat or an increase in stats for all workers at the same workshop. I think the random variety will make it interesting for players as they build up their workforce. 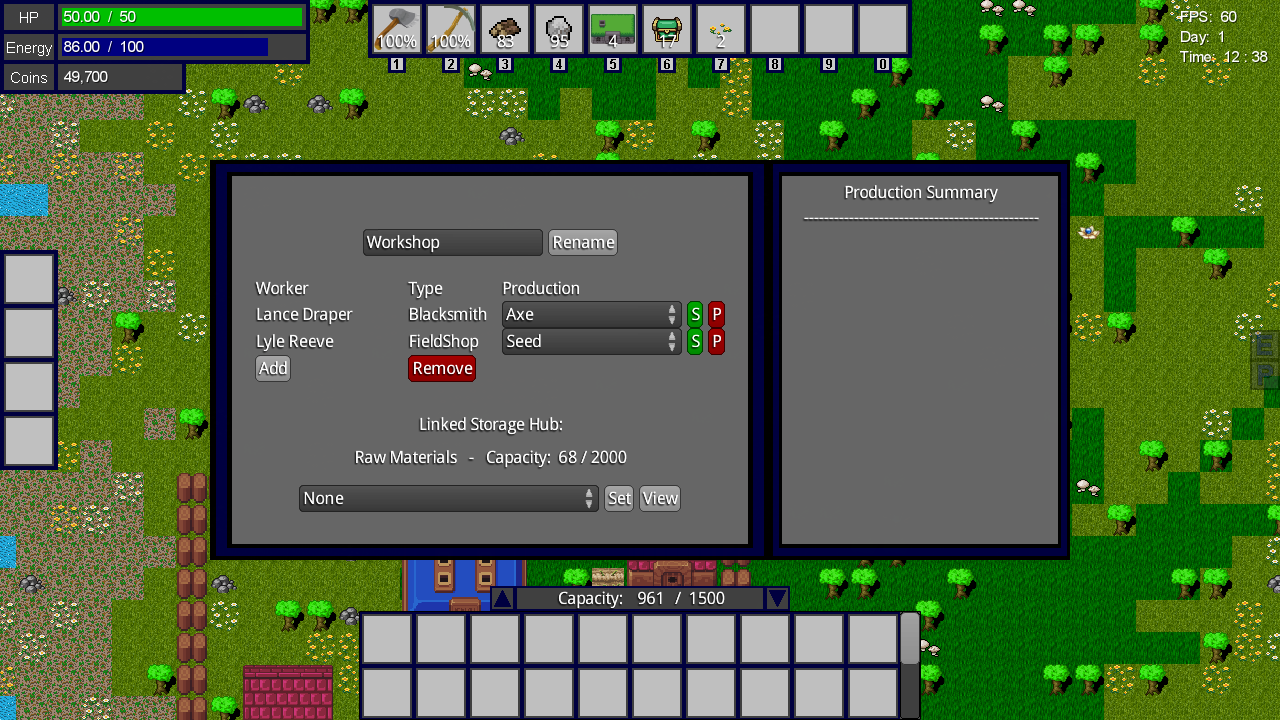 This last screenshot is the workshop UI with some workers set to work there. Their production item can be selected from the drop-down list. I'm still working on it, but the production summary will be displayed on the right. This will show things such as bonuses and the current production cycle's remaining time.

Well, that's all I have for this update. I can't make any promises, but I'd like to be able to put up at least a monthly update going forward. We'll see how it goes. And lastly, if you're interested in The Frontier, please check out the Greenlight page and vote to see it become available on Steam: The Frontier - Greenlight.