I talk about developing with the RGSS (RPGXP) and RGSS2 (RPGVX) engines.

I'll start with who I am.
My web name is Xilef/Xilefian, there are more variations, but mostly those two.
I started off with RPG Maker XP when I was 12, a friend had it on his laptop and showed me, I was looking for that kind of program to move my point+click adventure games into a more interactive RPG environment, so I downloaded the trial version and started experimenting with the default scripts and graphics, for some reason I didn't try recreating the first version of Battle World RPG until many months later

It's always best to experiment with RPG Maker first, never jump straight into a "First Project" and try to create a masterpiece, that is why my first few games were never publicly released or even shown to the public.

Project1 (Default RPGXP name) was literally an "event" testbed, events in RPG Maker are small programmable-sections, very much like "events" in any other game engine, the RPG Maker event editor lists every action that can be made and chooses from a selection of triggers and attributes for the event, the event takes a position in the game-world with RPG Maker, so a graphic can be applied to it or it can be moved (As opposed to a global event, that does not have an appearance in the game-world).
I discovered conditional branches with this test bed, how to add new actors into the player's party, basically it was a quickly thrown-together example of every default feature in RPG Maker.

The same friend that introduced me to RPG Maker showed me an example game demo, called "Argon's Past", the game has been discontinued now, but I really enjoyed the 10 minute demo, it showed me ATB battle systems for the first time, per-pixel movement system and other features that had been introduced with RGSS scripting, at the time I had never even opened the RGSS editor, you do need some programming knowledge to use it, and at 12 I couldn't program anything at all. After recreating Battle World RPG on RPG Maker XP I started again, re-creating it with scripts. I added more downloaded features almost daily. At the end of the engine-tweaking I ended up with an ATB system, a "Materia" system (Final Fantasy VII style) a new message system and so much more, I can't remember half the things that were plugged in.

The highlight of Battle World RPG v3 were my events, I really shined with eventing, on the RPG Maker forums I had people PM'ing me with how did I script so-and-so, I would reply with a screenshot of an event and they would tell me I'm yanking their chain!
With events I made:

I started side-projects (Probably the worst thing to do in developing a game as it is a sign of getting bored of your project and that it is not so great afterall), mostly event games, I made a very interesting game with events where the player has to defend a tower on a hill by shooting arrows at the incoming enemies, another one was a recreation of Pong! That was probably the best of them all.

With Battle World RPG v3 I started peeking inside the RGSS editor, editted some window position variables and such (That is a good way to start learning RGSS scripting), I editted a lot of people's scripts in Battle World RPG, but 2 years into development, I was upkeeping so many script-bugs and game glitches that development slowed more and more, then a hard-drive crash ended the game production entirely. I had the source files still, just I didn't feel I needed to keep developing a terrible game. It used over 200 out-side resources.

After the announcement of RPG Maker VX there was a lot of discussion on the forums over if it will be a better editor or not. When demos and videos were released I came to a descision that it is a worse editor than RPG Maker XP, but I still bought a copy of VX and started peeking around it. It was the realisation of the power of the new RGSS2 engine (Now ported to RPGXP) that decided this was the platform for Battle World RPG v4, I will amaze the RPG Maker community by making something great out of VX.
I started with a plan, I had original graphics at the top of my list and a few VX scripts that had been released noted to the side. I wanted to use few scripts and many of my own resources. A quick "tech-demo" style scene was made for v4, it was an imagining of the new introduction to the game, the title screen (A still image of a palm tree) went straight into the scene of Julian, with a new custom graphic (Like Final Fantasy VI characters) escaping a "factory" after stealing the "barrier protect crystal". The scene ended with a rough-design of Julian's new airship flying into the clouds and the game title fading in. 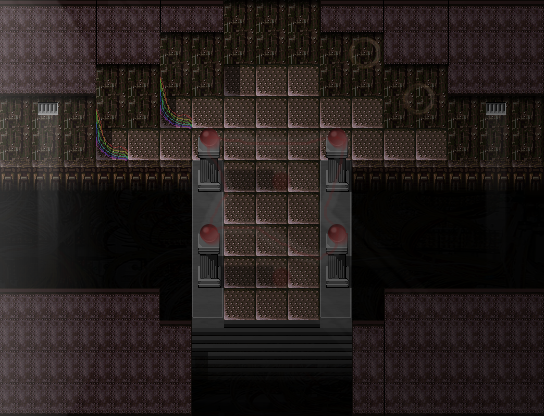 It's always good to write down ideas you get, I have a forum with a dev. section just for the developers of Battle World RPG and I post and add to posts any ideas I get.
A great idea that I may expand on is the use of pre-rendered stills to enhance the story-line telling. I made a 2nd introduction that used a series of images and text to describe what is happening.
I made a new type of event just for VX, it was an evented animation system that simple showed a sun setting on a hill. 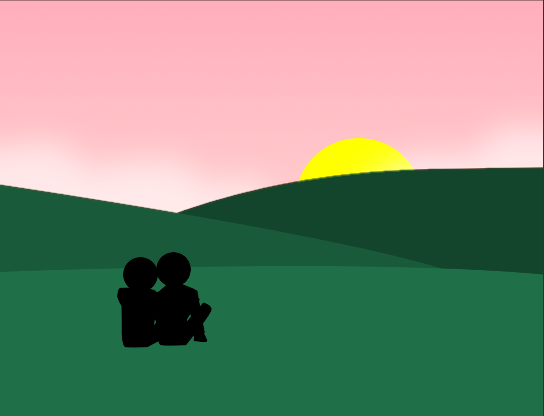 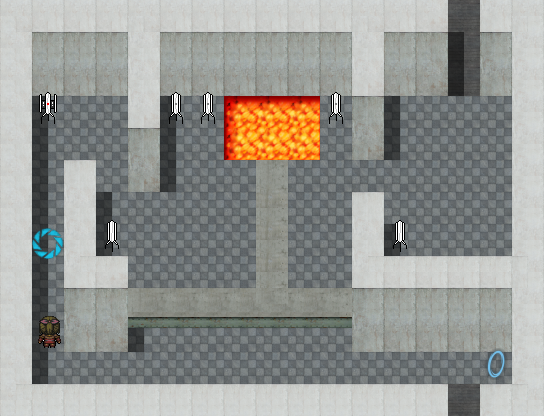 My favourite of my experiments with RPG Maker VX was the 2nd introduction of Battle World RPG, it contained a hidden mini-game that honoured the now removed "Ninja Pirates", clones that Julian had created (Based on a custom Little-Fighter2 character by me!), they appeared prominantly in the 3rd Battle World game.
In this minigame you have to mash the spacebar to punch the other pirate as many times as you can, it was released as a stand-alone VX game later. 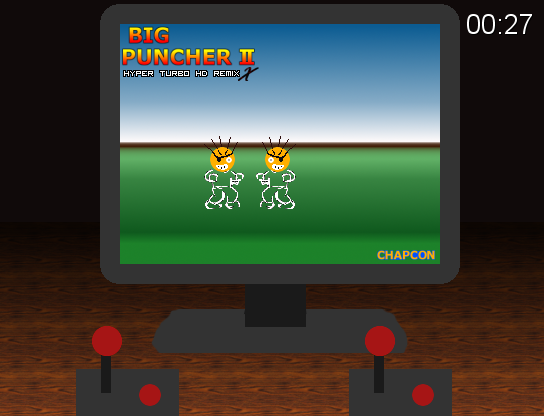 And with that version of the game came the design of my animated title screen, something that is now iconic to Battle World RPG and still impresses the RPG Maker community.
I started off with an idea and made a still-image of the idea. 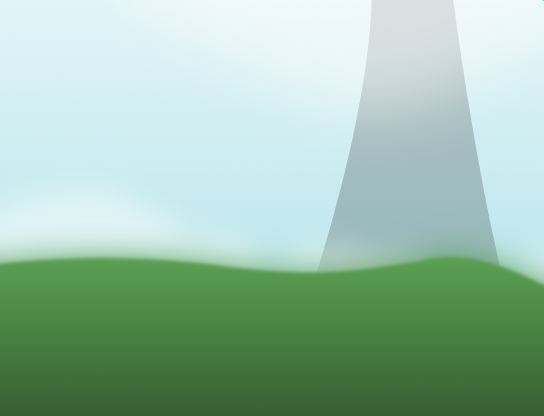 I added randomly generated weather system, evented by me. 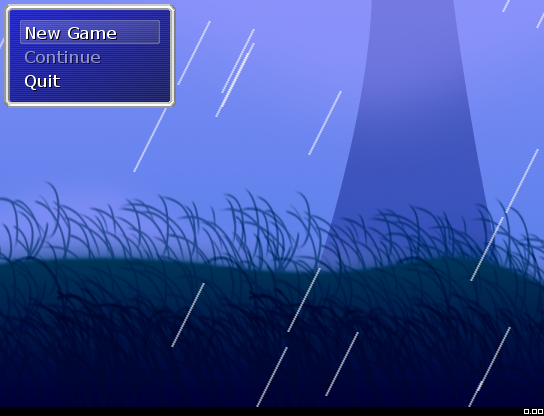 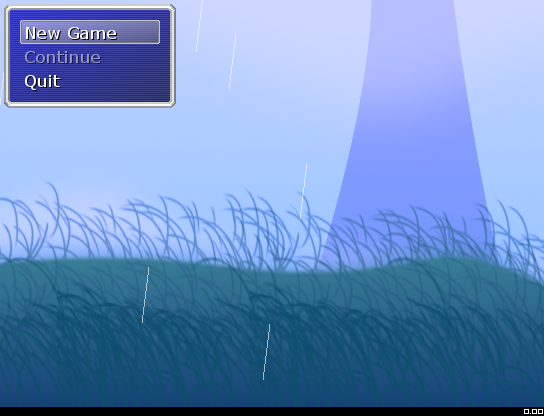 On demonstration to the RPG Maker community of this feature I had many replies, my favourite being something along the lines of 'Brilliant idea, ugly execution', at the time I thought it looked amazing, oh boy was I still learning back then. I started improving under the advice of this one user, he kept giving me feedback 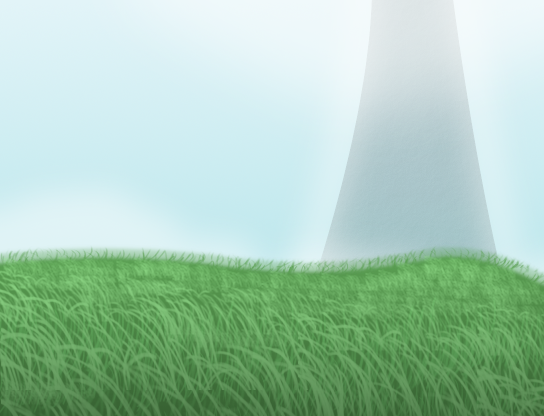 He really liked this stage, I added the butterfly that flies across, tweaked the weather settings and placed back-in the animated grass movement: 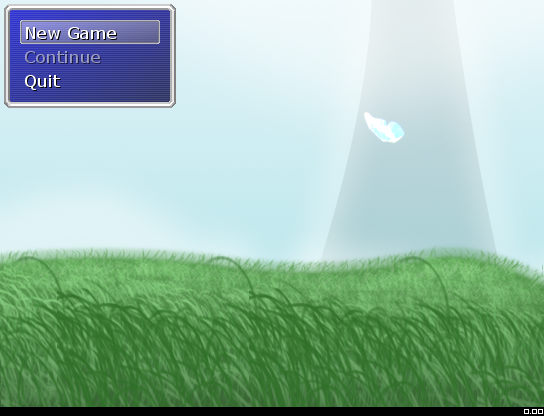 The animation technique of the grass is one I saw used in the film "The Cat Returns", there is a scene where the main character is on a hill and the grass moves with the wind, I looked closely and saw how this effect was done, I mimicked it here.
You can see the finished title screen in the images section.

That really set the game in motion, I changed character template once again to something simple and unique and started producing tilesets to use, I have a few introduction ideas written up, but at the moment the game jumps straight in. I will have to revise that later.

Thanks for reading! I hope you learnt something about development with RPG Maker and the general feel of starting a project from scratch (4 times!)

I close with advice: When you start on side-projects, it's a sign that your main project is not good enough for you to develop, take a step back, identify the issue and address. Sometimes encorporating your side-project into your main is best.