A preview of some things in development for our upcoming November patch! Environments, weather, animations, UI, and a creature turning on its developer. Whoops.

We’re now halfway through development on the next update (YAY!), so we wanted to share another progress report and give you a few sneak peeks of what we’re up to. Off we go…

We know everyone’s excited about the new map, so let’s start there. With Ashley and Kevin’s help, Roman’s been working on adding all the interesting things that can be found around the island. For example…

This massive cave system just happens to be under a giant volcano (lava coming soon).

The textures and geometry aren’t final yet, but here’s an early peek at the layout of the queen bee’s humble abode.

We don’t want to spoil things by saying too much, so we’ll just leave this here…

To prepare for the different biomes and add variety, we’re adding some atmospheric weather effects. Here are a few that John’s been testing:

Creature-powered structures are taking shape! Kevin’s been modeling some of the buildings which, when powered by one of your hard-working creatures, will upgrade your resources. Like this iron forge: 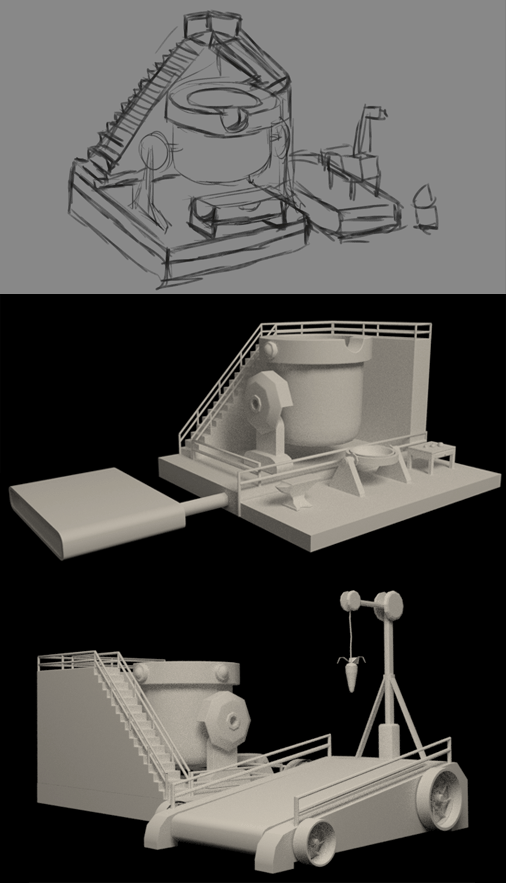 The power comes from a creature running on the treadmill so John’s also been implementing creature energy levels. After working for a while, they’ll get tired and need to be fed based on their prefered diet: herbivore, carnivore, or omnivore.

Creatures are also getting smarter! They now avoid running to the middle of the ocean, don’t try to eat you if you’re friendly, and leave the lifeblocks of vanquished foes alone so you can pick them up, among other things.

We’ve also been doing some work on the HUD, rearranging things and cleaning it up so it provides more information and is prettier to look at. Here are some icons and early mock-ups in progress.

Just like with the handheld items from last time, Ashley’s been reworking all the leg assets, updating their rigs and animations to use in the new animation system. The cat leg went first to make sure everything was working smoothly.

After each one is done, Greg gets them up and running in the game (pun totally intended). He’s also working on the physics to get them moving properly and realistically. Basically, he’s making sure creatures don’t float through the air or glide over terrain, and that their bodies move appropriately with the legs. Things like that.

Here’s a test he did with some new leg code where he almost got eaten. Programming is dangerous work.

And we’re continuing to optimize everything, old and new! John’s been working on chunk loading, so that things around you load in more smoothly and there’s less of a hiccup. He’s even optimized creature sounds so that there’s fall-off as things get further away. That catsheep in the distance will no longer be meowing in your ear as if it were right next to you.

That’s all for now. Thanks for reading! We hope you like all the things we’ve been working on for the November release. As always, you can let us know what you think in the comments or on the forums. We’d love to hear your thoughts!

There’s more in progress and we’ll be posting more sneak peeks as development continues but until then, keep an eye out for our Halloween Contest starting October 27th! To celebrate the spooky holiday, we’ll be asking you to create the scariest abomination you can think of. The winners get a prize and, of course, bragging rights. We’ll post more information soon.

Back to work! See you next time.