Now on to some development! First thing that I wanted to do is to revamp the lighting of this game. By changing much of the diffuse lighting to point lighting, I was able to produce better visual contrasts within the scene.

Now on to some development!

So the first thing I wanted to do is to play around with the lighting a bit.

Right now, it feels that the world needs a bit of contrast - make the darker areas darker. Since it's a spherical world, it would also be nice to also use lighting to put a greater focus on where the player is and darken the surrounding areas a bit more. Currently, Armillo is heavily using diffuse (fixed direction) lighting to light up the world. The light just comes in from a single direction like so: 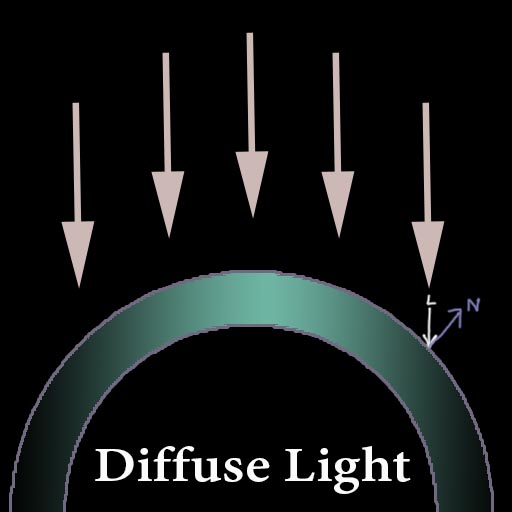 Now in order to improve contrast and focus more light on the area where the player is, we could perhaps just increase diffuse and reduce ambient (overall scene lighting). It just didn't get the results that I wanted. So I figured to try out a better way, which is to replace much of the diffuse light with a point light. 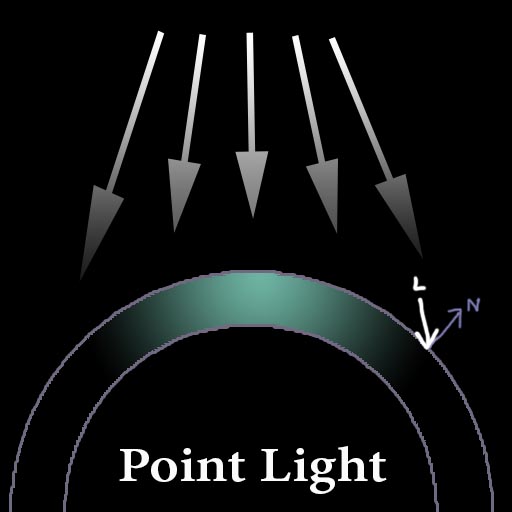 This is pretty simple lighting stuff, but the nice thing is that it creates a lighting scene where the edges of the sphere are darker and creates a nicer contrast in the normal-mapped world. By making this change, it helps create a larger contrast through two means: One is the angle of incidence (defined by L (light) and N (normal)) which is greater the farther towards the edge of the sphere. The other is light attenuation where light loses its effectiveness the farther away from the light source which is made more obvious on a sphere.

So what does it look like? Here's a couple of before and after pics:

The colors of the first scene was tuned a bit to get a better look, but not the second. I was able to up the contrast of the foreground while darkening towards the outside of the sphere. It also looks nice in motion as the scene is normal-mapped. So light changes as you move around the scene is more obvious now.