Change game design about gun (implemented), Polish 'the cave' theme. This is fifth Dev Log of Under the Farm.

Dev-works for 16th week has done !!
The major dev-works during the 16th week are as follows.

Up until now, the implementation part has made 'rapid prototype implementation' a priority by referring to 'Enter the gungeon' as a reference. In the meantime, the game design part was struggling to find the unique fun of UtF, and it has been applied since the big direction was fixed last week.

Last week we told you a certain direction. So far, the implementation is as follows.

Strength due to the collection of guns is very variable and does not accumulate. We thought it would be a good idea to have a play experience that is constantly getting stronger, while taking random fun. Therefore, we decided to make the collecti of guns impossible and to increase the proportion of power-up items which are acquired and accumulated.

If the gun does not drop, should we proceed to the end with the base gun? Of course not. The 'upgrade' system has been added to strengthen the guns to give the 'stacking feeling' of the guns like power-ups, When you beat an enemy, it drops red powder(the exp) and when you get this exp, the gun grows.

Each time you gain a certain amount of experience, the level of the gun increases, and you gain a point to strengthen your character. 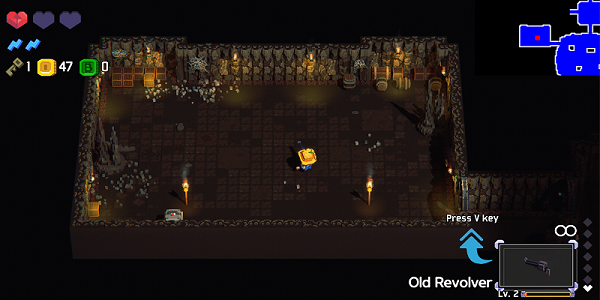 You will be given several choices drawn within a certain range, and you have to decide what abilities the gun will raise. I want to make it fun to nurture the gun according to the power-up acquisition situation or the desired ability. 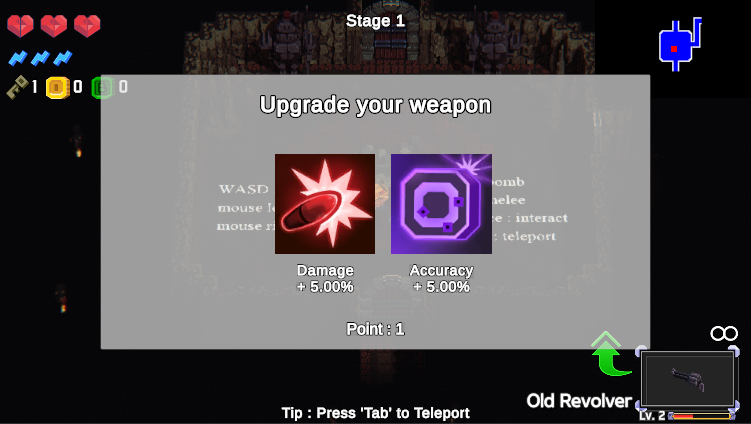 When you achieve some conditions, you will be able to promote your gun.

Promoting will change the shape and characteristics of the gun. (It works the same way as the "Class change" in RPG game.) Promotes are not yet included in the current build. We'll tell you more details in the next development journal.

Until now, it was possible to play only one stage. If you die or beat the boss, you had to start again from the beginning.

Now you can continue to the next floor and the difficulty continues to rise. We still have only one boss, so you would meet the same boss all the time in this build. But from upgrades and power-ups, you can feel the continued growth of characters.

We are uploading the details of the cave theme applied on the first floor. For darker, less visible stalactite objects, we added a lighter color to improve visibility. 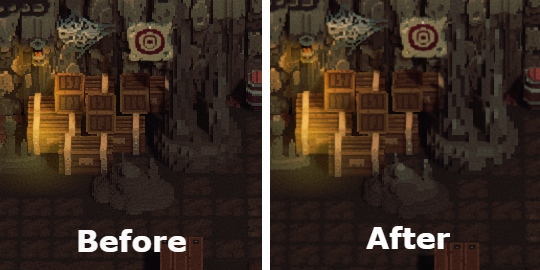 In the case of a drum object, We make it darker for the theme. We've been working on the details of the overall theme. 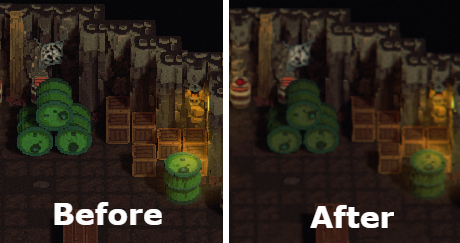 In addition, placing objects in combat rooms, Modifying wall patterns naturally... We made minor adjustments to the parts that are not noticeable. I hope these parts are piled up and the quality of the game goes up :) 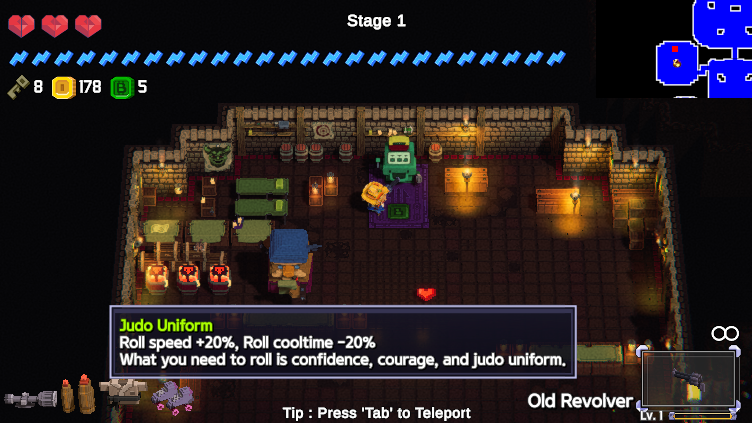 Thank you @ivox for your suggestion. The size and placement of the UI is still awkward. Once the high-priority tasks are over, we'll also take care of the UIs.

Long network work is moving toward the second half. This week I had difficulty synchronizing multiple players' bullets in a co-op situation, so I fell into the mess once, but fortunately now I'm in the finishing stage. We will be able to come to you with a build that finishes together with the UI for co-op and minor usability improvement in the near future.

Game design changes for guns have begun to take effect this week. In particular, the level-up system has been well applied to the game. Game play is not very fun (not yet), but you can check the entire direction of the changed game.

Today's story in the game. It's a must-have item for everyone, a magnetic helmet. 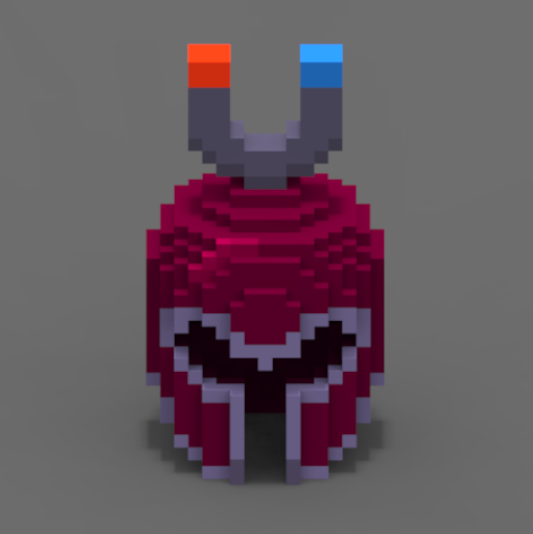 Once upon a time, there was a demon who was famous for being greedy.
The devil, who wanted more money, had a brilliant idea.
'Let's use the greed of people who love money as much as I do!'

The devil makes a helmet that draws money around him,
While humans are collecting money with this helmet,
Demon went to the last minute and robbed the money that people had collected.

Rumors spread that demon accumulated a great deal of wealth.
The devil who was bothering people with such a demonic idea was defeated by the warriors who came for treasure and was sealed,
Only the helmet is waiting for someone to remain in this dungeon.
A helmet pulling money, I'd like to have one :)