There are many things implemented since last develog, as I haven’t been able to find a moment to update the devlog. I’ve been very busy preparing the first playtest version.

There are many things implemented since last develog, as I haven’t been able to find a moment to update the devlog. I’ve been very busy preparing the first playtest version.

This version features just 4 rooms of the whole castle, but with final polish and aesthetics. The purpose of this first playtest is just guess if I’m following the right direction and if there are things that, before starting seriously, need to be polished first.

But before showing anything, let’s summarize what has been introduced since last time.

+ Added the first enemy into the castle, the slug: it’s behaviour is really simple, moves slowly until it finds an obstacle or a void. If an obstacle, returns in the opposite direction, if it finds a void, it jumps to the ceil if possible or changes direction if not.

+ I worked on torchs and lights. Each torch can have up to 4 particle systems, but most pf them have just 2.

+ I worked on many props for the game, some of them not still used: light bulbs, iridiscent plants, the big eye (you’ll see later), new ladder…

+ Added the entrance to the castle: 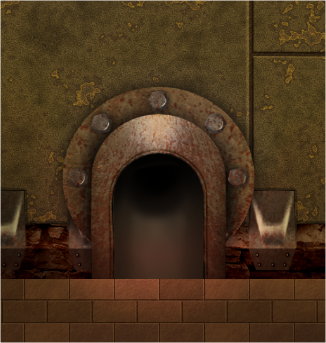 You will return to the castle through this pipe door.

These torchs use 4 particle systems: fire, sparks, smoke, and lighting flares which produce that fluctuating effect on the background walls.

+ Added red illuminating flares to the slugs and a white one to the main character. This eases the visualization of the player on really dark areas (I borrowed that from “The dungeoning” : )

+ Added spawn points into the rooms. Before that, the player was spawning at (0,0) falling down.

+ Added high attack and lower attack, for creatures crawling on the ground.

And these are the results!

You can see here the same 4 rooms I presented on previous devlogs, this time with a near finished and polished appearance: 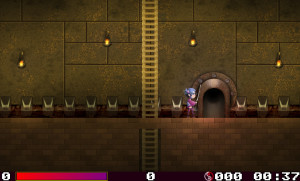 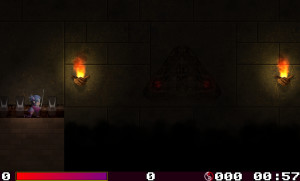 Click on the images if you wanna see the high resolution version of the image. 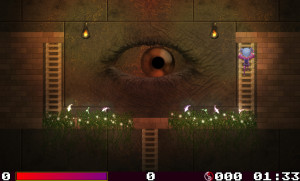 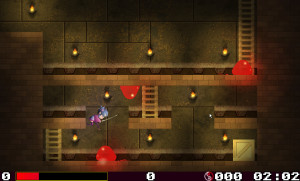 Click on the images if you wanna see the high resolution version of the image.

And that’s it! Want to see a bit of the play test version in action?

If after all these walls of text, you arrived here, then you deserve a gift: a picture of a “Dev At Work”! 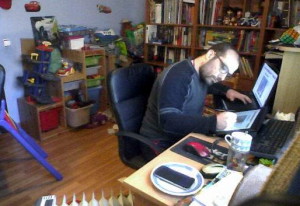