The development continues! With only the boss left, Stage 02 is almost complete. In this article, we show more about the dev process of the miniboss.

For the Dungeon miniboss, we wanted something different from the Crystal Cave. There you had to fight head-to-head with a giant worm, but in this case, we decided it would be awesome if, instead, you just had to survive (and run for your life). A giant, badass monster would be perfect for the job, something that you'd rather avoid at all costs if possible. At first, we thought about some kind of centipede, or a spider (discarded idea, because my husband just hates spiders so much haha), something like an insect. Then we remembered a little shy guy who never showed his face on the stage, always attacking from the shadows:

I always imagined it as a beetle but never drawn it full body. We made some tests, but in the end, if we used the same proportions it would be a small miniboss, and we wanted it really big. We finally decided it would not be the same beetle, but some kind of "master" of them. Fair enough.

But adding a straight line where you just run away from the giant miniboss would be not fun enough, even with so many enemies and obstacles trying to slow you down. There should be something else. Then we thought it would be nice if the beetle had a rider that could attack you in some way. Why not another alligator? A different one, of course, this time I doodled something before making the model, resulting in a character with a fun looking. 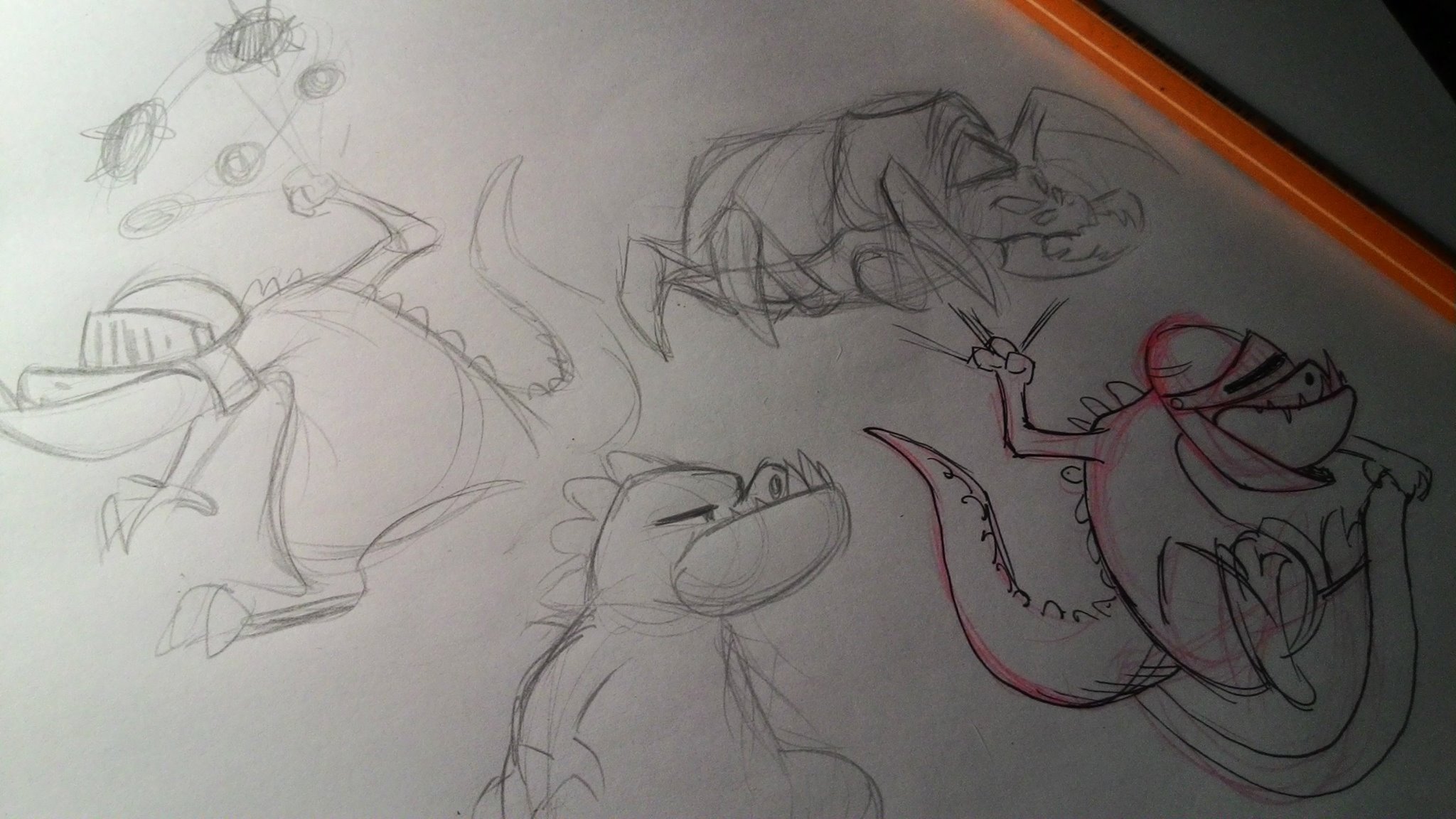 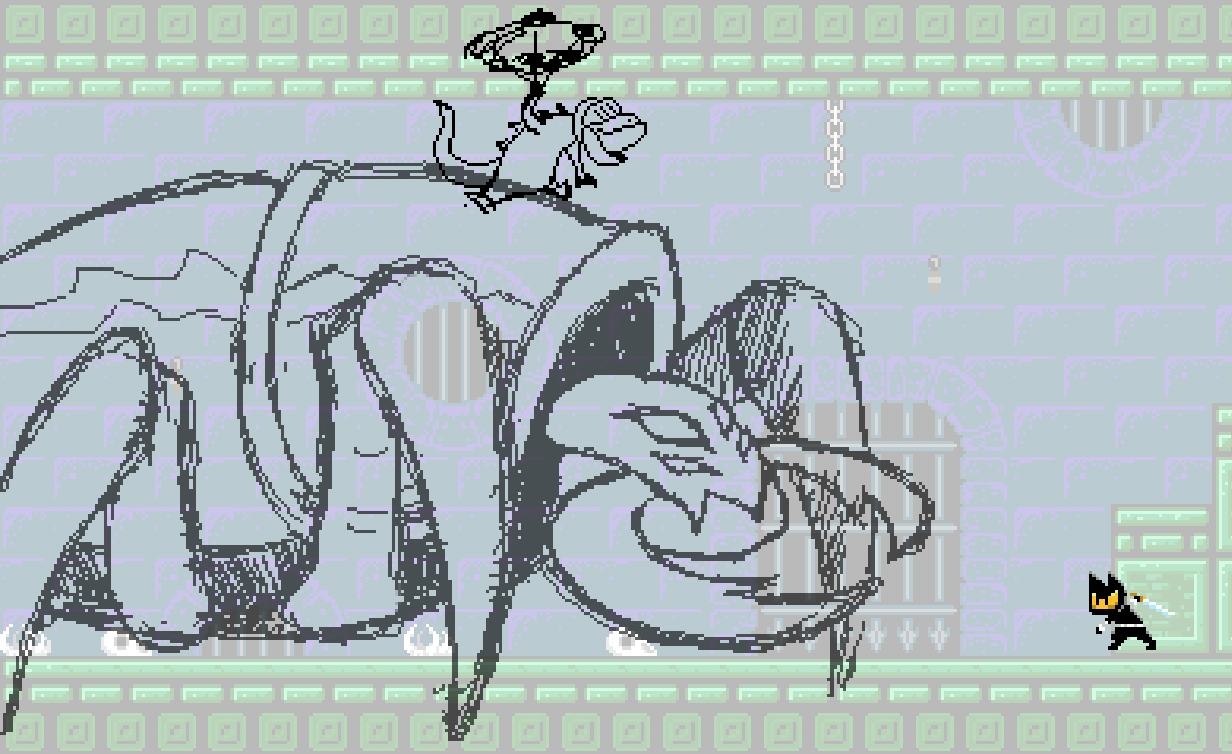 Translate it into an 8-bit pixel art is not easy. Sure, for the giant beetle it was a bit simple since I had enough room to work with (his original size is 320x144), but the jockey was a different story. I had to make him fit a 48x48 pixels grid even with his animation so it never hit the room celling, even with the beetle walking movement taking him up and down. He only had 2 animations: idle, where he would stay still just spinning the iron spheres, and the attack one. Both should never exceed that grid. It worked just fine in the end and the character really looked a lot like the original doodle.

It has 12 frames for the attack animation, 6 for the idle. I had to fit in those numbers because the beetle walk cycle has 12 frames (what I animated first) and the jockey needed to follow this. In early development, this miniboss was supposed to walk in FRONT of the tileset, like it was really massive, but we decided to make it fit in the room instead so it would not look like it was a card box walking over you.

Animating the beetle was a big challenge, although I designed it to be easier than the previous miniboss. There I made a discovery: there's no such thing as a simple animation for characters this big. All legs, head, and body were split apart, even the legs had 2 parts. Even if the beetle doesn't have feet like a real beetle (I decided this way to simplify the animation), it was still troublesome to make a frame-by-frame animation where it would never break the claw form. That could have been a really, really easier job if I made it with bones, but that's 8-bit TRUE pixel animation. There are no shortcuts. If you rotate something, pixels will break, is that simple. There is a total of 12 frames for the full walk cycle. There's no such a thing as a 6-leg animation tutorial, but I've based the movement on this lecture from The Animator Survival Kit (thank you, Richard Williams): Youtube.com

The last issue we had was to fit those 2 characters in one. At first, they were supposed to be different entities moving together because, at the end, the jockey would hit a spiked wall and fall. But it would be really troublesome to simulate the ups and downs from the beetle on the jockey, although it could be done. But there's something in game development I've taken seriously: if you can make it easier, then make it easier. The walk cycle had 12 frames, I made the jockey have 6 frames idle, 12 frames attacking, and fused them in one animation. Three complete walk cycles and he attacks. At the end, when the jockey gets knocked out, I created an idle animation with the same size of the walk animation but with no jockey. It fits perfectly.

Finally, it was ready. Below are two gifs showing a bit from the gameplay (just a peek).

The beetle actually doesn't even want to chase you. Once the jockey is off, the door is open and you're safe to go to your next (and last) challenge before the boss.

Just forgot to mention, but maybe you have guessed: touching the beetle is an instant kill. Watch out!

That's all for the Miniboss from Stage 02! Phew, it was a tough work, but totally worth it. If you have any questions feel free to ask.