Post news RSS Dev Diary - The Will of Romulus!

let's take a look at some of the recent changes we've been making to STA3 and talk about us as a team.

Hello ladies and gentlemen! The Gul is back and ready to tell you the secrets the Obsidian Order have learnt about the Nemesis program! Did you miss me? Ah, why do I even ask: Of course you have!

I’m going to be doing fairly regular news posts letting you know the changes that we’ve been making recently for the next version and I’ll be talking about us as a group more than we have in the past. We love the fact that the community are so involved with what we do and we’d like it to be a bit more open so you guys can see the people behind the project. I’m going to start by discussing us directly.

Getting our heads together!

Before we go into any details of the changes we’ve been making I’d like to talk about Stellar Parallax as a whole (that’s what we call our modding group in case you didn’t know).

Since the initial release of The Final Frontier (TFF) we’ve been a bit fractured as a modding group. We had additional projects that were in progress that pulled some of the modding team away to concentrate on that. Perhaps even more unfortunately, those of us still working on STA3 didn’t always agree on the direction we wanted it to take.

Some of us wanted to concentrate of the more 4X aspect of STA3 by making TFF more refined and giving it an even broader aspect of exploration and interest. Some of us were really worried that the sheer diversity that TFF was actually harming gameplay because it made the multiplayer experience very difficult to balance. It often meant that one player or another would have a marked advantage over the others because they might get a lucky roll of the dice and have vastly superior planets close to their homeworld.

We made the decision to have two concurrently running projects - the next version of TFF for the single-player minded users and the Nemesis project for those that like to focus on multiplayer.

Long story short, it was a really shitty decision! We should have been on the same page from the start and helped each other make the best of both worlds!

As many of you know, Infinities (for Stellaris) has been put on hold as a project. It’s really sad and massively disappointing for the group that were working on it as they had some amazing ideas. It did have one positive effect though. It made us as a group really sit back and have a think about what it means to be part of Stellar Parallax and where we wanted to go from the failure.

We had a fantastic group chat in our discord with nearly everyone attending and really set the world to rights. We agreed that moving forward, Nemesis and TFF should be brought in line with each other in so far as possible. We don’t want it to be confusing in the future so here’s what we decided!

When we do release, there will be two folders to download together! STA3_Nem_Core and STA3_TFF. Like the image above, TFF will live on top of NEM to allow the greatest versatility to the player. If you want a tight multiplayer match, then you can use the NEM folder alone, however if you’re looking for the full experience, then you enable both folders and it will work seamlessly together! We think this will be better for us as a team as we’re working together properly again and it’ll also be much better for the players because it’ll be much easier to use STA3.

Let’s move on to talking about some of the changes we’ve made to balance. Today; Romulans!

The Will of Romulus!

Having tested the game fairly extensively we weren’t satisfied that the Romulans were competitive enough in early game. Having done a fair amount of tinkering, we don’t think that this is an economy issue despite the Romulan’s comparatively weaker economy overall.

We’re satisfied that it’s because the Romulan early game ships simply aren’t as good as any other race! We’ve made some changes to improve the overall feel of being a Romulan in early game. 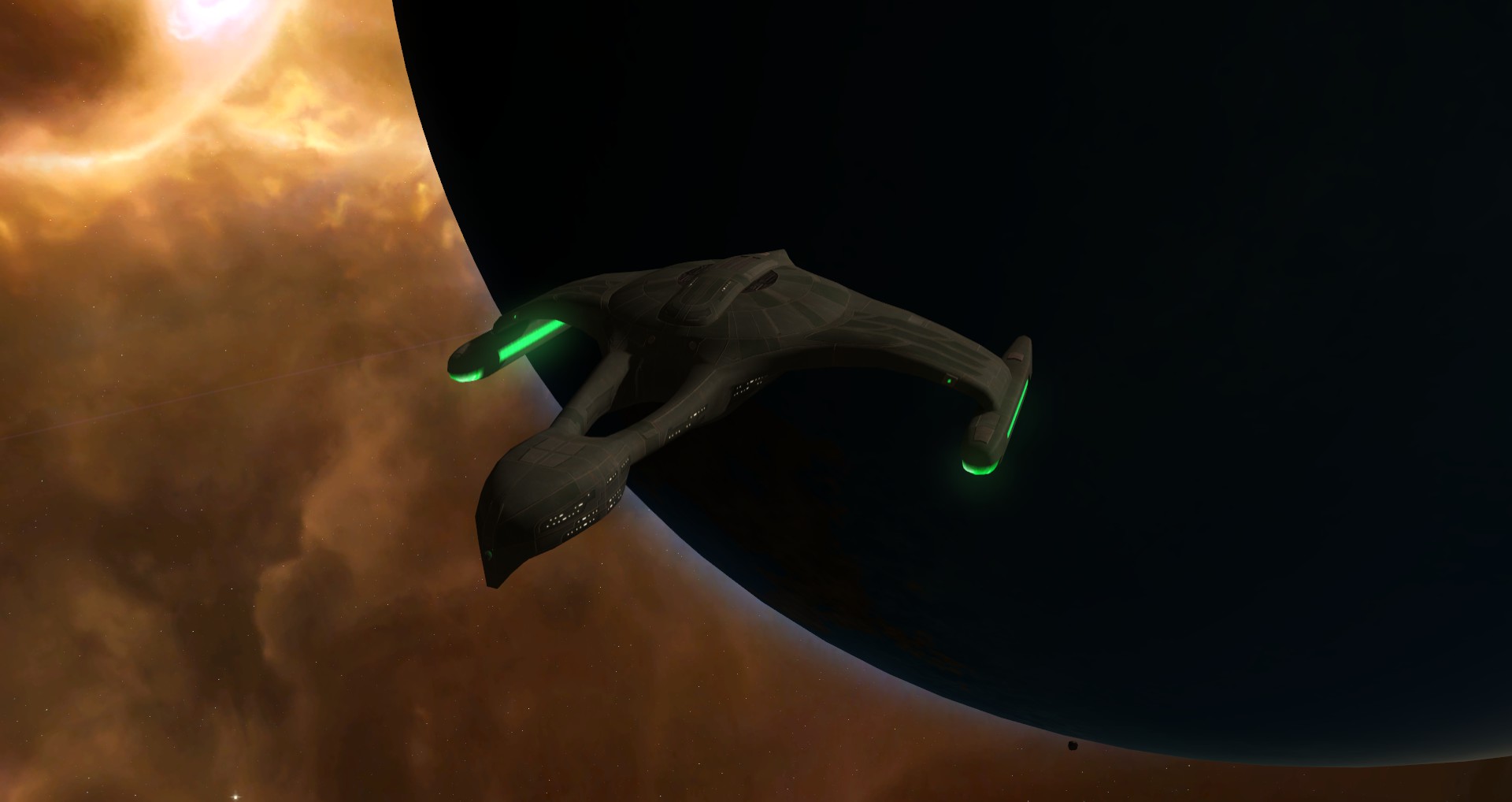 What the Hawk is this?

We had a look at the Hawk (that’s your starting frigate) and it didn’t have any starting abilities. That was pretty poor! So we’ve added a passive plasma burn to it that adds a chance for its weapon fire to set a plasma fire on enemy ships. We think this will make it more damaging and more valuable in early game. It also fits the Romulan DOT (Damage Over Time) playstyle nicely and works with their ethos. 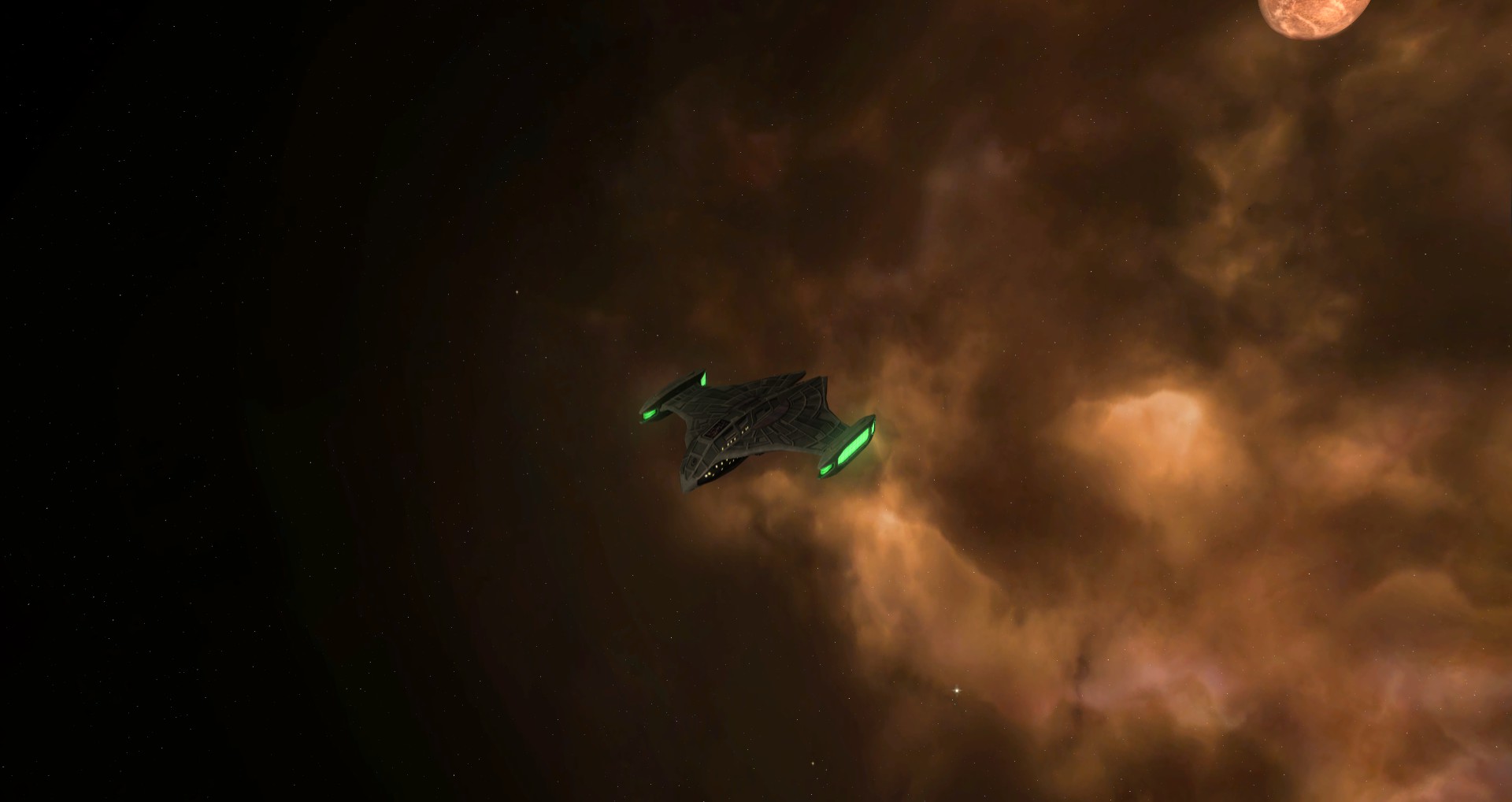 The Shrikes have now been moved more in line with some of our other corvettes. We’ve given them a passive ability that stacks up to 20 based on the number of other Shrikes in close proximity. This ability improves their shield restoration as a group and should make them fantastic as a pack. As the Romulans are primarily a shield tanking faction, we think this also fits in nicely. 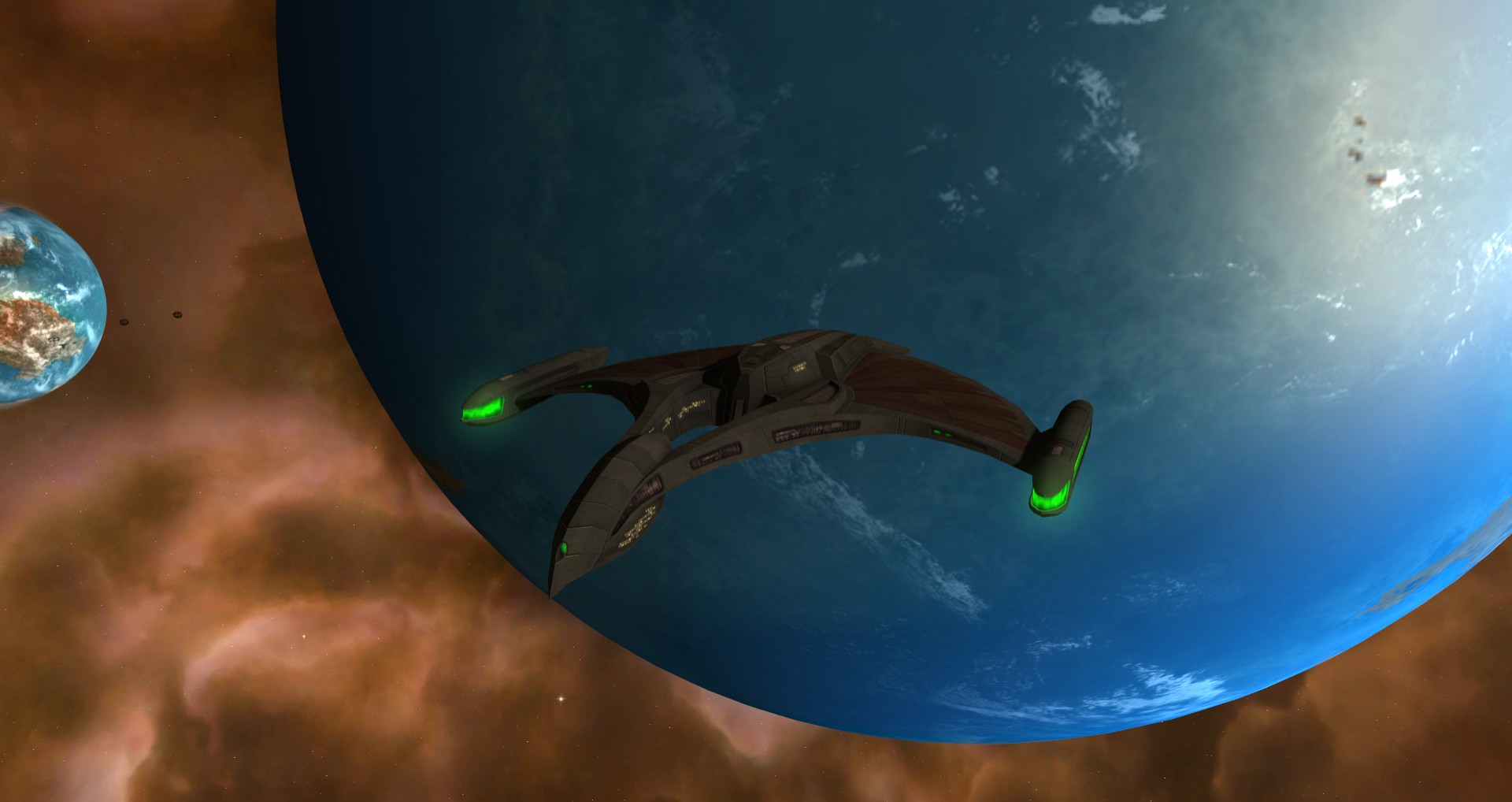 The Griffin has also had some changes. She’s had her bidirectional jamming ability improved (this ability makes it very hard for enemy ships to escape to warp as it extends the chargeup time by 5000%). The range has been moved from 8000KM to 18000KM. This makes her more valuable to the fleet. 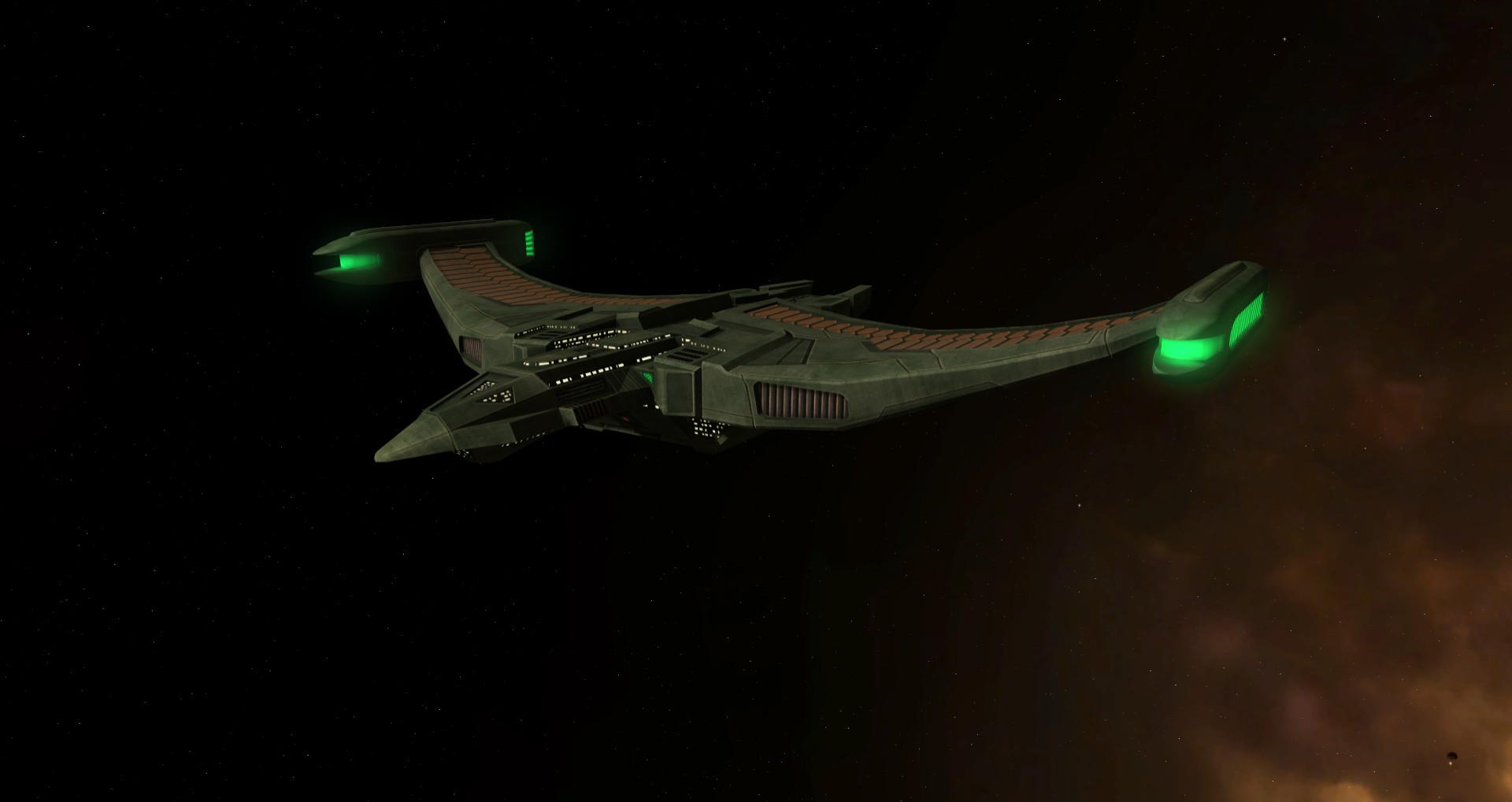 Chunky is the new funky!

Last but not least on the early to mid game changes for the Romulans, the Heavy Defender. After watching a lot of games in testing, we realised that no one ever uses it! We concluded that this was because of cost - the griffin because of the cost differential was actually a more attractive choice in general and people built it instead of the Heavy Defender. So, simply, we’ve made her cheaper! She’s now much more cost-effective and should encourage players to choose her over other similar class ships!

That’s all the early to mid game changes we’ve made to the Romulans, but there’s one more BIG change! 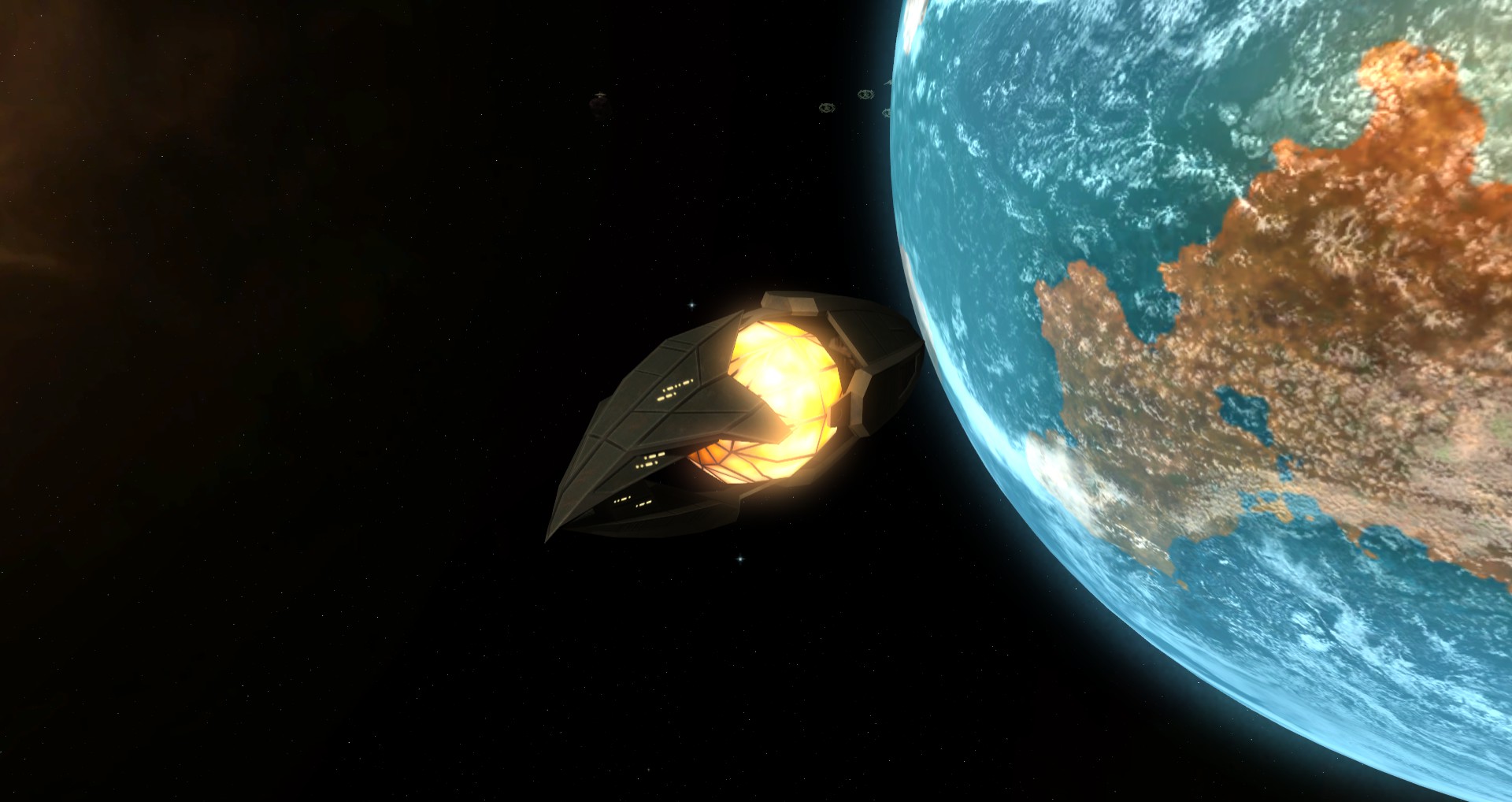 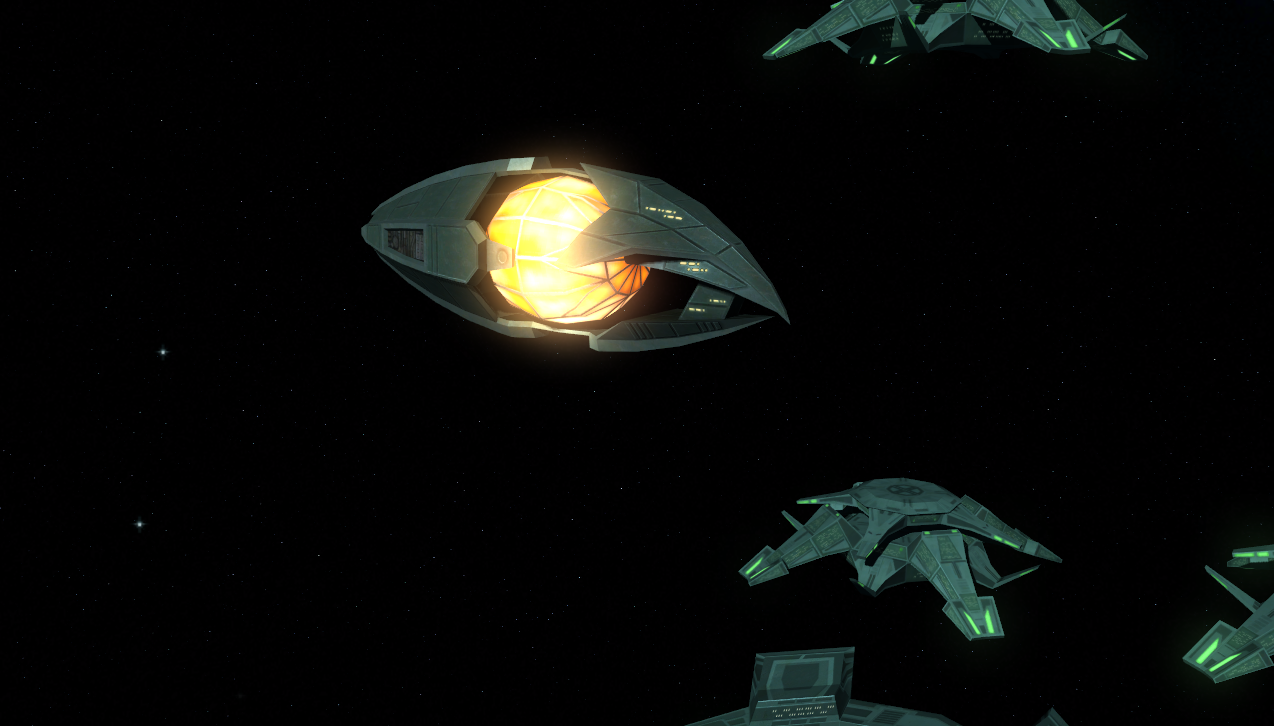 Romulus will rise from the ashes!

We’ve finished and are in the process of implementing a fan favourite from Armada and Armada 2! The Phoenix is a new Titan for the Romulans! She works in a similar way to the Shockwave titan the Klingons get and is a fantastic fleet killing last ditch weapon! We think that she’s a fantastic, modern take on what was a bit of an ugly ship. Good work Max!

That’s all we have time for today! Check back in a couple of weeks where we’ll be talking about the Klingons. If you have any questions you want us to tackle in the next news post, ask away and we’ll try and tackle them! This has been a bit of a long read for you so have a lovely glass of Kanar and relax!

The senate has commended you for your brilliant dedication!

Exciting news! I'm a singleplayer/TFF person myself, and am always excited for more 4X and exploration related stuff.

I remember using the Phoenix in ST:A1 as a final send-off to a player's dying fleet, and watching the fireworks as the Spacial Rift ability shredded EVERYTHING nearby, including ships, stations, upgrade pods...and any unfortunate allies who got caught in the blast. Looking forward to see how this plays out upon release! :D

Thanks for the News.

Hm. A couple of weeks for the klingons. And onother couple for Fed, Cardassia, Borg? Looks like a release next year. ;)

Hey, not commented no here as I'm not good at forums really! Prefer fb. I downloaded this a while ago and loved it. Brought a whole new aspect to the game. I've not dropped hundreds of hours on the game of the mod really. I just generally spend a few hours slowly taking over and dominating a map and I'm happy! I really enjoy the design of star trek ships, especially star fleet. I love the older ones. Do you think there is a chance of us getting the constitution class and the re-fit in game, perhaps as specials? It would be fun to see. I know this second is less likely too as it seems everything in here is from the prime universe but do you think you'll ever add any of the kelvin universe styled ships? :)

The Constitution refit is already in!

No Kelvin Universe or Fed TOS ships though, as they're outside the scope of the mod.