I'd like to start with some good news: the war declaration crash has been fixed. War declarations have been enabled, and the game won't crash during wars! Big thanks to av213238 on Discord for his help in troubleshooting the issue.

For the record, the game will automatically default to drafting "infantry" brigades if you mobilize, and really hates it if there's no unit type with that name. Thus, the game will crash if you don't have an infantry unit named as such. 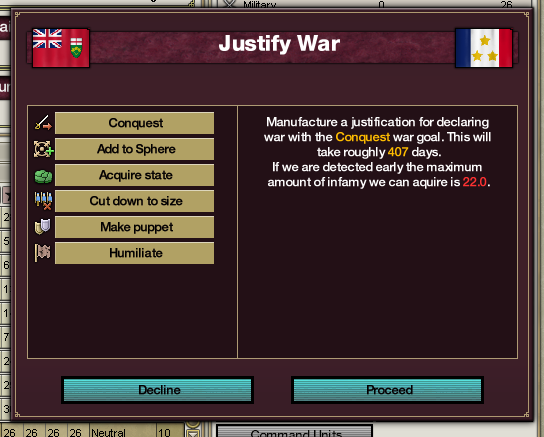 War justifications are enabled now! Unless a nation is part of a supranational treaty (e.g. the Articles of Dissolution) you may declare wars.

In conjunction with this, military brigades now require small arms to be created, and ammunition to keep them supplied. Over time, there will be more types of weapons and supplies added, especially for bigger (and more advanced) brigades, and I will expand more into this on its own dev diary once implemented.

The space program has also been expanded and modified, chiefly more inventions and events for orbital and interplanetary flight techs, and the addition of rocket launch sites, space centers, and spaceports.

Rocket launch sites are not just the physical location of space launches, but they represent the industrial capacity needed to develop, build, and launch spacecraft. They are quite costly to build and expand, they provide small maluses to the province on which they're built, and they can be quite unpopular both locally and nationally if there are other pressing issues (e.g. significant poverty or dissent.) However, rocket test sites are necessary to progress through the major space milestones.

Even though you only really need a single rocket launch site for a space program, you can upgrade it for faster progress in your space program. At a significant cost, you can upgrade them to a Space Center with better amenities geared towards human spaceflight, and for a lot more you can have a proper Spaceport for routine launches and reusable spacecraft.

Don't worry; if your nation ends up covering a lot of rocket launch site locations, you can hide all of them from the political decisions tab with the press of a button.

The Resolute Rocket Launch Site, in the Arctic circle.

Ultimately, the national space program is a high-cost, high-reward enterprise, that rewards those who are able to afford to invest lots and invest early. While they can burn through political capital and tax dollars like nothing else, and the results are only seen after years, if not several decades, they can unite a nation, boost research, and thrust an otherwise minor country into international relevance. 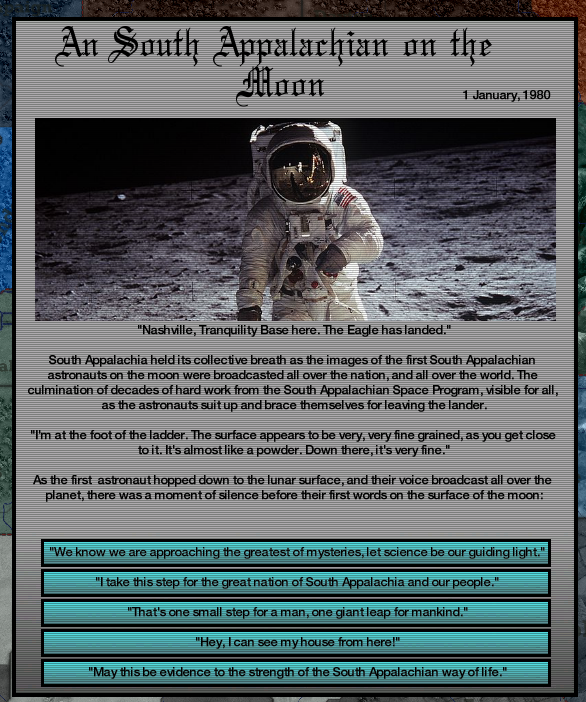 It was worth it.

Version 0.08 is out! Beyond the aforementioned bug fixes and work on space exploration, there are some small tidbits in finance inventions, localization improvements, and the ability to pick your nation's standard rifle which, although a relatively minor choice, provides some flavor and customization to your military, as well complementing or synergizing with your country's military doctrine.

Over time, standard-issue equipment will grow to include options in electronic and exotic warfare as well, although the decisions right now are between high-powered battle rifles, balanced assault rifles, and (later on) small and nimble carbines. 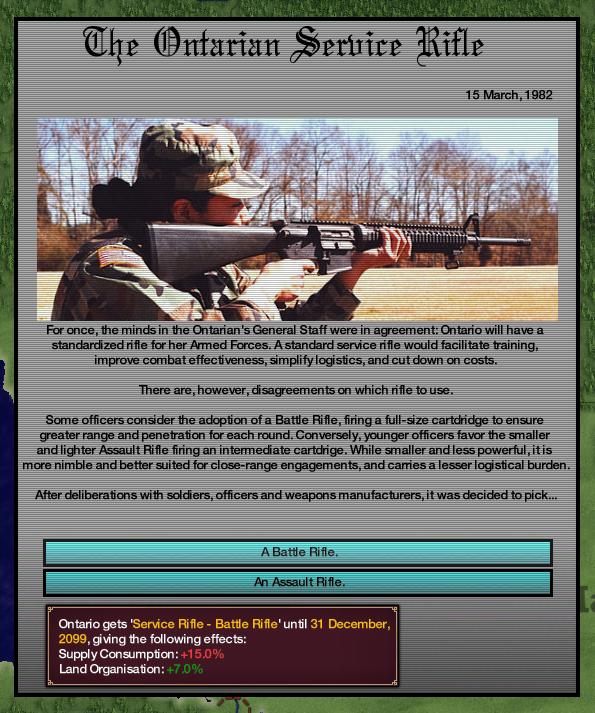