In which I ask which game, if any, the mod belongs in

Many people on this page may remember that this mod is very much building off another one, A New Order, a similar and unreleased mod for Victoria 2. The story for which is, of course, the same as the original mod. Development for which began in early 2014, and which I tinkered with for two years until the release of Hearts of Iron 4 in 2016.

The reasons for the mod's original development on Victoria 2 were two-fold.

1. Victoria 2 was the most up to date game that I felt could do the setting justice. While Europa Universalis 4 and Crusader Kings 2 had since come out, both settings were set too far back to properly represent A New Order, and other Paradox games out at the time in the Hearts of Iron series were either nigh on unmoddable (Hearts of Iron 3) or I had never touched them (Hearts of Iron 2).

There were other problems with choosing Hearts of Iron 3, most of which will still apply to Hearts of Iron 4 and will be discussed below, but the largest problem is a world war is a necessity for the game to work, while A New Order's world war should be avoidable.

2. Victoria 2 could represent the setting better than most other games. The sphere system, colonization (or, in this case, recolonization), crisis, great powers, and other systems are something very helpful for the setting, as well as its focus on narrative and flavor events. These things all come together in Victoria, and only one other Paradox game at the time had any of those features (Europa Universalis, which has colonization mechanics, and which at the time had not yet added Great Powers).

At the time, this made Victoria 2 a natural choice. While this in itself had its issues, it still made the most sense mechanically out of the other games. The big stickler is of course the combat and factions, two things which Hearts of Iron features that Victoria does not, which are very important to the setting. Being a mod closer to modern warfare, the combat system of Hearts of Iron would be preferred, and since the world of A New Order is locked in a cold war, the faction system was also something I needed.

However, when combined with the other mentioned factors, the decision was made for Victoria 2. As mentioned, the biggest point against Hearts of Iron 3 was how rigid it was, and unopen to modding. Little had I realized, of course, that Victoria 2 would be little better.

I'll leave this brief, modding Victoria 2 is like slamming your skull against a brick wall in order to make dinner. You can slam your head against the wall until your brains spill out and land on the plate and congrats you have food but its awful and tastes horrible and everyone is probably quite uncomfortable at best. The biggest problem with the mod was that the Mediterranean sea is filled, and Victoria despises province modding.

Of course I refused to not include Atlantropa (the filling of the Mediterranean) and managed to scratch out a form of it in the mod, but it never worked quite right, and it meant I never really wanted to show off the mod past the first few screenshots that pointedly did not include it. One of many results can be seen below: 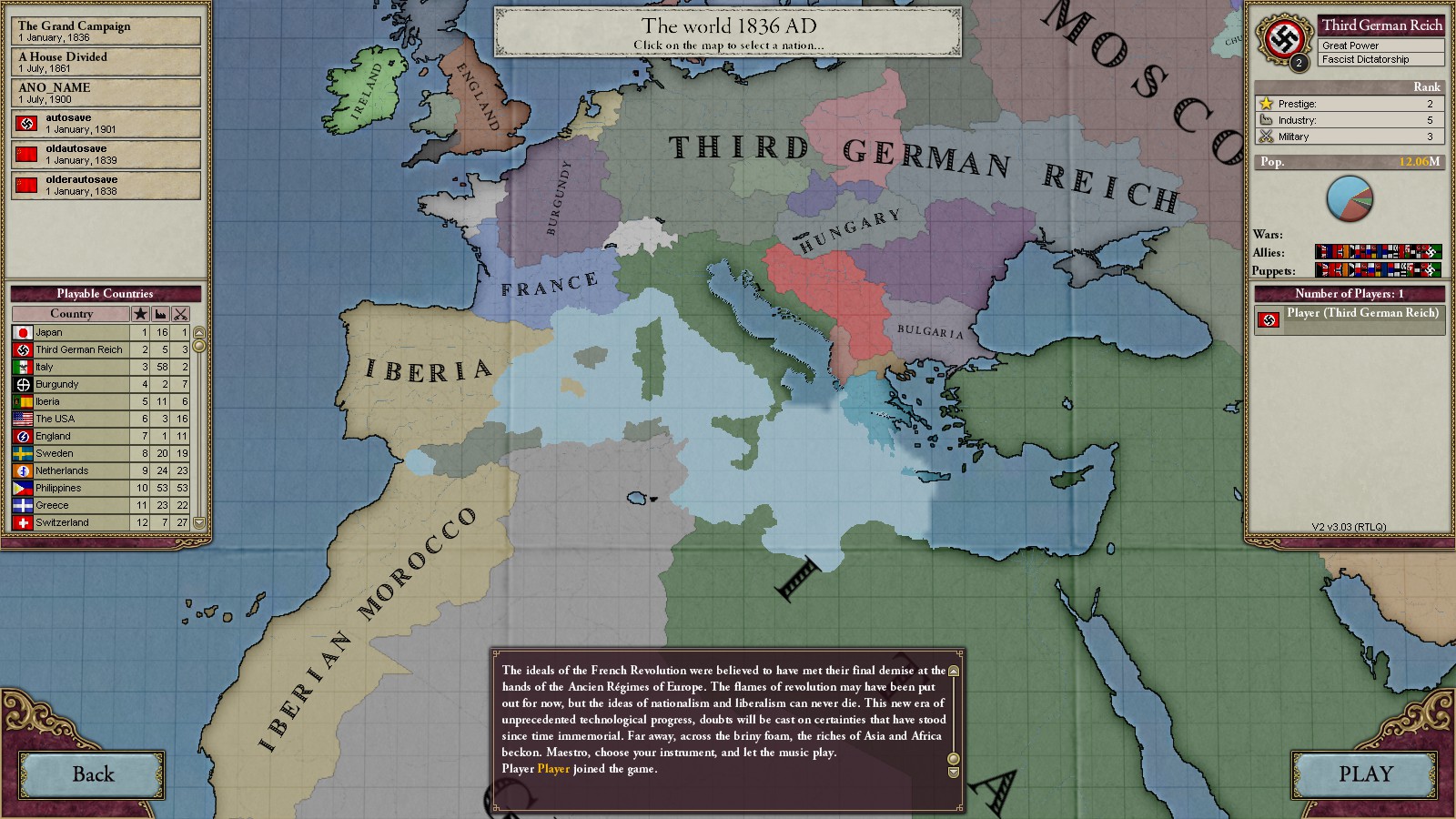 Eventually, I became extremely fed up with making the damn thing work, which led to me only working on it every other month or so, and normally in other areas.

Hearts of Iron 4, modding, and sandboxability

Hearts of Iron 4 has met with a lot of criticism for how sandbox the game is compared to its predecessors but this was perhaps one of the biggest reasons for me to switch over. With an event system and mechanics allowing for the creations of new factions and destruction of old ones, changing of factions, and changing of government forms, the mod seemed like it could very well find a home in the new game. I wasn't the only one to think so which is why the Kaiserreich team has also found their footing in the newer game.

While I would lose some things on switching over, such as the colonization system (which was already made impossible due to how province modding in Victoria 2 works), the Great Power system and the narrative structure of many events, many benefits could be found as well. Combat was closer to what would fit the setting, dynamic factions means I can fully show the German / Japanese / American split, while giving all outcomes due representation (America siding with either, the Russian nations reforming, countries in the Reich breaking off and forming new factions, etc.)

Of course, the biggest change was that Hearts of Iron 4 is the most moddable Paradox game yet. While it has issues, each Paradox game has become more open to its modding base with successive entries and Hearts of Iron 4 was definitely not an exception. Simply put, getting A New Order working in Hearts of Iron 4 was a (RELATIVE) breeze, and only took me a bit more than a week or so of work to properly implement the map, Atlantropa at all. Of course the game has a lot of things, and I don't think the devs envisioned many people changing around landmasses so this makes the systems a bit wonky, but new features such as a built in mod tool and actual error logs really do make my life so much easier. Thanks Paradox!

So after some deliberation, I finally made the hop over.

Of course, we lost things on the transition too. Hearts of Iron 4 is a rather arcadey game, and Victoria 2 has a lot of very deep features that (although a pain in my ass to mod) were a joy to get working and have in the game. The full economy system could show how each side were industrial power houses, the pop system meant I could properly show the German caste system (and how horrifying it is) and really pound in how Germany is built on slavery in this mod (as well as Japan, really). The tech system of Victoria 2 encourages long term development over the quick 10 years or so of research open in the Hearts of Iron series.

We also lost the Great Power and sphere system, which is huge, really. The sphere system especially. As A New Order is in a Cold War era environment, Japan, Germany, America and others would of course be battling it out in the diplomatic arena to get smaller nations to aid them or follow their views. The sphere system meant that Western Europe could be attached at the hip to the Reich but nominally independent.

Of course the system wasn't perfect. In early versions, Reichskommissariat Moscow would have enough industry and population to hit the 8th Great Power and break away from Germany. Italy and Iberia were large and powerful enough to be unsphereable, the strict adherence to 8 Great Powers made the tri-polar world seem a bit too open.

Still, Victoria 2 had enough things going for it that it was hard for me to move on. Not least of which was the fact that it's my favorite Paradox game.

And of course I run in to one problem continuously. Simply put, Paradox has never released a Cold War title. A New Order is very much a world stuck in a cold war. This means Hearts of Iron 4, while the best for the setting, has many problems that I have no real way to address. The largest of which is that A New Order isn't a world war game. While World War Three is a possibility, and will most likely be seen by players in A New Order (with an explosive conclusion, of course), the game itself is centered around the three sides being locked in a stalemate.

Hearts of Iron 4 simply isn't meant to simulate this, though it's the best Hearts of Iron game to do so with its new world tension system. However, Hearts of Iron is still meant to be about a lead up to an inevitable war which takes up 90% of the game. The game simply doesn't have much in the way of a system to make peacetime enjoyable, which is why I'm going out of my way to add things to do in the meantime, like civil disorder in Germany or rising rebellion in Japan. A New Order, as a major power at least, will be just as much about fighting your fellow countrymen to keep the nation together as it will be about fighting other nations for dominance.

Still, this will be the hardest thing to model in the mod. The most difficult thing, of course, will be the threat of nuclear war. Although I'm still not sure exactly how this will be implemented, I still wanted to make World War Three an enjoyable battle, and allow the player as any of the powers (or other nations) to fight it for a time without nuclear weapons, with a lore reason for this to happen. Nukes still need to exist of course, and they do need to be able to do what they do and end the world when (and if) the time comes.

Hopefully this explains why we're here at Hearts of Iron 4 instead of Victoria 2 now and some of the struggles I've been going through planning and making this mod. Future dev diaries will start to go deeper into the countries themselves and the gameplay, but let this be as a precursor in the meantime. The mod will hopefully not take too long to be released in some form now that the map is just about done.

Of course when Paradox releases either Victoria 3 or a Cold War title (if ever), then we might have some thinking to do. Again.