We've got exciting news about our release date in our first official dev diary about our corruption mechanics. Check it out and let us know what you think! 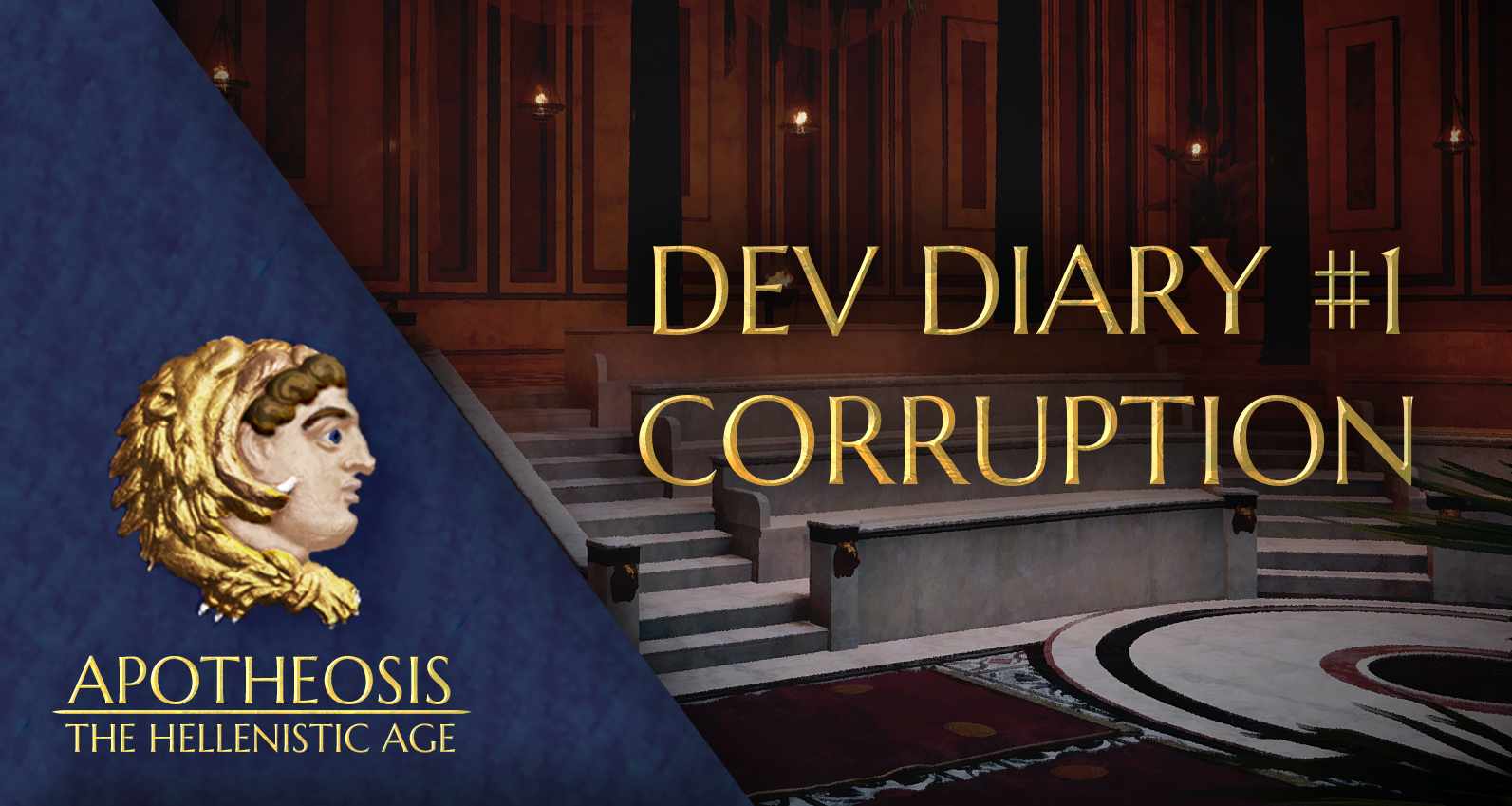 We have huge news in our first and last official dev diary before release. The Apotheosis team is excited to announce that we will be releasing the mod within a week! We are going through our final checks, even as I write this, and will launch the mod as soon as everything checks out.

As for the rest of the dev diary, we wanted to showcase one of the systems we’ve implemented - Corruption. Now, some of you, in the weeds, might be thinking “hey wait, isn’t there already corruption in vanilla?” Well yes, in fact there is a small corruption mechanic in vanilla; however, we decided to expand upon it for Apotheosis. Our corruption expansion is one small component of our attempt to faithfully represent the complexities of city-state politics during this time period. With that said, let’s get into the meat of the corruption system. 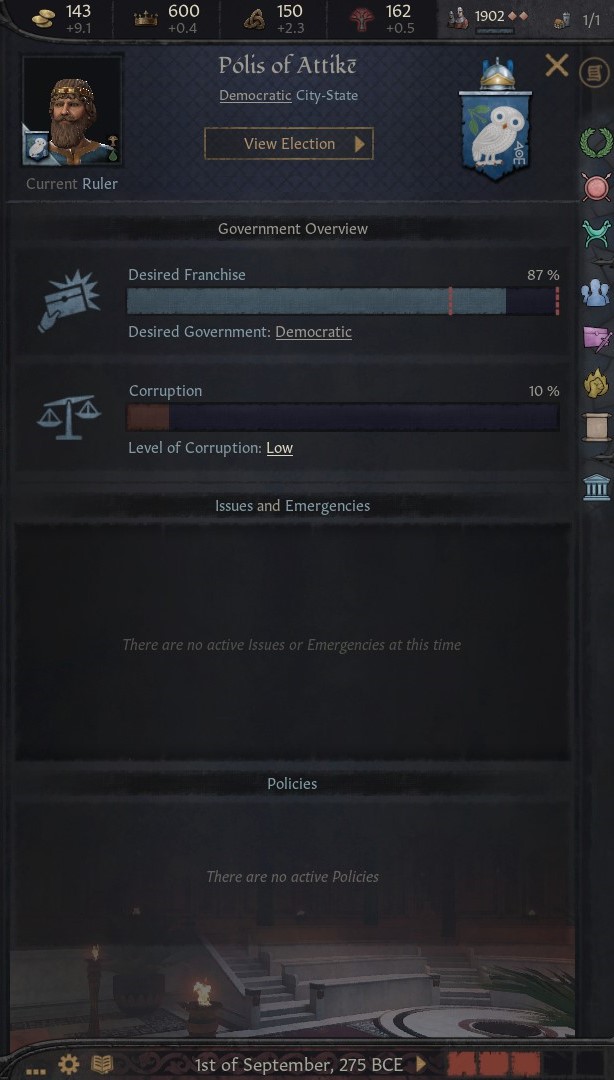 For eligible government types, you will get an extra tab on the right [the building icon] that allows you to open the City-State screen. There you will find a lot of important information about your state, including its current measurement of corruption. Historically speaking, democratic leaning states tended towards lower corruption while autocratic states tended towards higher corruption and the initial values of each state will reflect that.

Despite where the state starts, you as the player can determine its future by making important decisions throughout normal gameplay. So far, we have updated nearly 300 vanilla events and schemes with options that will either increase or decrease your state corruption.

Every time you select an option that decreases corruption, there is a chance your character will earn the Incorruptible trait, which makes it easier to maintain low corruption within the state. On the other hand, choosing to increase corruption may earn you the Corrupt secret. 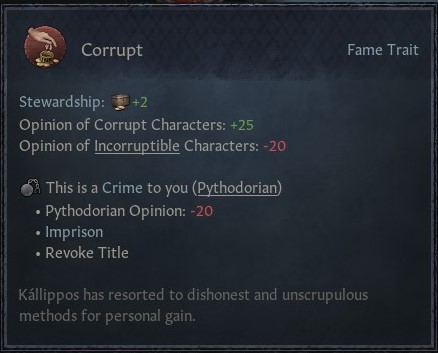 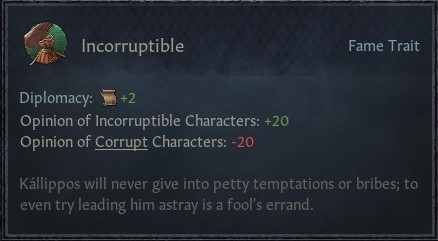 Once a character has the Corrupt secret, they unlock a new dastardly scheme called Entice. The Entice scheme allows you the chance to gain hooks in other characters by discovering their deepest, darkest desires and then providing it to them. It's a high risk, high reward game as characters you fail to Entice will learn of your Corrupt intentions and may reveal them to the world. 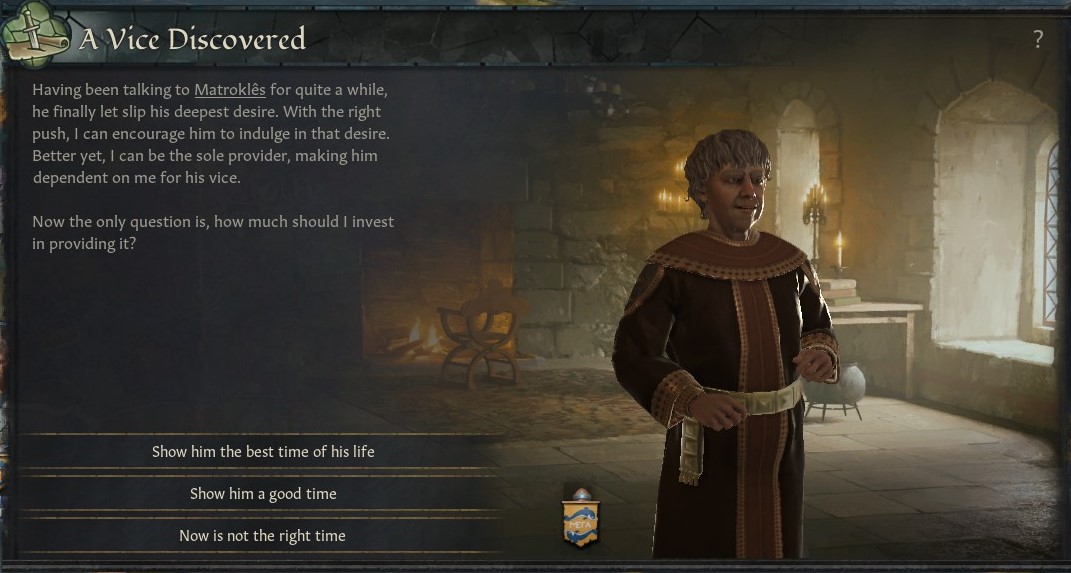 But is being corrupt really so bad? The approach we have taken is that corruption is just another tool in the toolshed for any ruler. As your state corruption increases or decreases, your character will gain new modifiers that affect the state. High corruption leads to higher tax revenue and increased levies but at the cost of increased building cost and decreased monthly control. Meanwhile, low corruption tends towards higher development growth and county opinion while decreasing vassal opinion and fewer levies. In the end, the choice to be an incorruptible philosopher king or dystopic corrupt democracy is up to you. But be warned, because corruption, while driven by individuals, manifests throughout the whole state. However much corruption you have accrued by the end of your character’s rule will stay with whomever replaces them.

As with all the other city-state mechanics we are working on, the corruption system is a work in progress and likely to change over the course of development. The team is really looking forward to putting the mod into your hands and getting your feedback on it.

Let us know your thoughts on our Discord: Discord.gg