Time to take a look at some changes on how contracts work this week. Negotiations have changed, and we’re introducing a new minor feature to make contracts and your actions within the world of Battle Brothers have more of an impact: situations. Let’s find out what that’s about!

Time to take a look at some changes on how contracts work this week. Negotiations have changed, and we’re introducing a new minor feature to make contracts and your actions within the world of Battle Brothers have more of an impact: situations. Let’s find out what that’s about!

With your actions in the world should come consequences. As we’ve mentioned in a previous dev blog, contracts are now based more on what is actually happening around settlements and less on artificially spawning things for you to fight. Lots of greenskin activity in the neighborhood? Then there’s a good chance people want to hire you to take care of them. There’s direwolves roaming nearby? People are likely to want to hire you to hunt them down.

We want to take this a step further. You know how the village burgomeister is telling you of how people are disappearing and that’s why he wants you to hunt down those beasts? It’s no longer just flavor as we’re introducing situations for settlements. 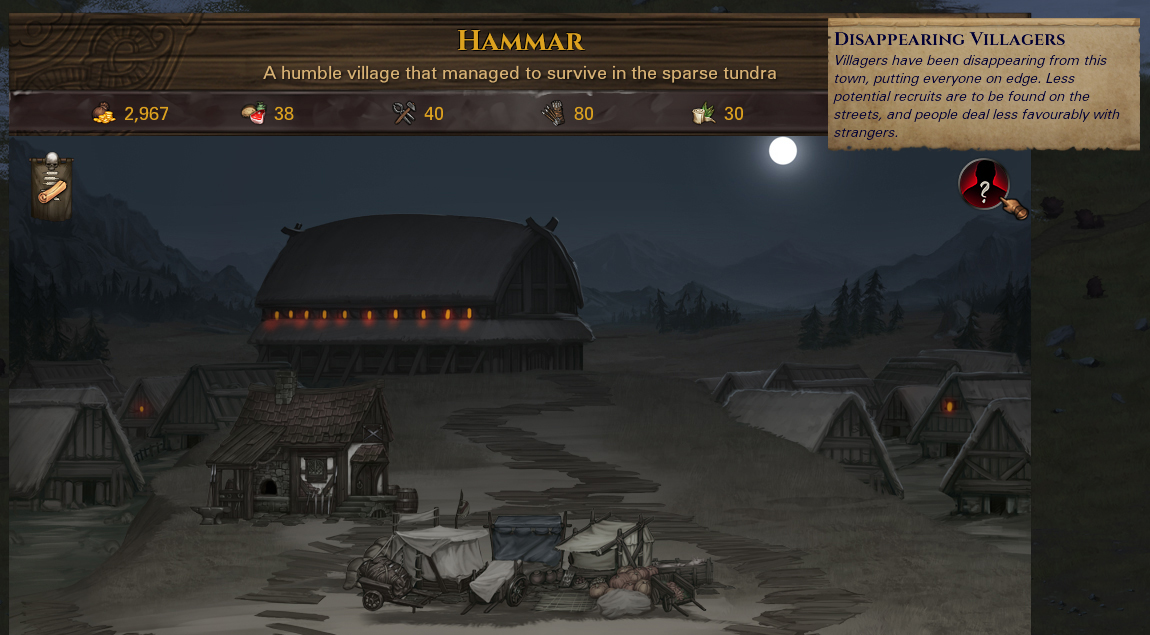 A settlement can find itself in any number of different situations. If there’s something roaming about, such as direwolves, villagers can be disappearing, which influences both the number of recruits available and the prices you get. As you take on the contract and rid the village of this terror, you’ll resolve the situation and the village can prosper again. Depending on your actions and success in fulfilling contracts, settlements can also find themselves in new situations. For example, your action of escorting an important caravan can result in a castle being freshly supplied, which grants you and everyone else a better selection of goods to shop for. On the other hand, if things don’t go as planned, a settlement can find its granaries raided or burned down, which makes food more rare and more expensive.

While just a small feature by itself, introducing these situations contributes to your actions having more of an impact in the world of Battle Brothers, and it makes the economy feel less static as settlements have actual problems to deal with and benefits to gain from hiring you. In addition, having this system in place will allow us to potentially extend it in the future with situations not linked to contracts, such as the outbreak of a disease, for a more dynamic world.

Here’s the thing: Negotiating contracts should be a part of gameplay, but the way it works now, you just ask for more money until the employer denies, and that’s it. It’s automatic, there’s little thought behind it, it’s not an interesting mechanic. So yeah, something needs to change. There’s two ways we could have gone about it: Either turn this into a more complex minigame of negotiating for better pay, or change it into something different. While the idea of creating a complex and fun minigame may be intriguing, it’s also not feasible within a limited timeframe and an already packed roadmap, so we went with the second option. 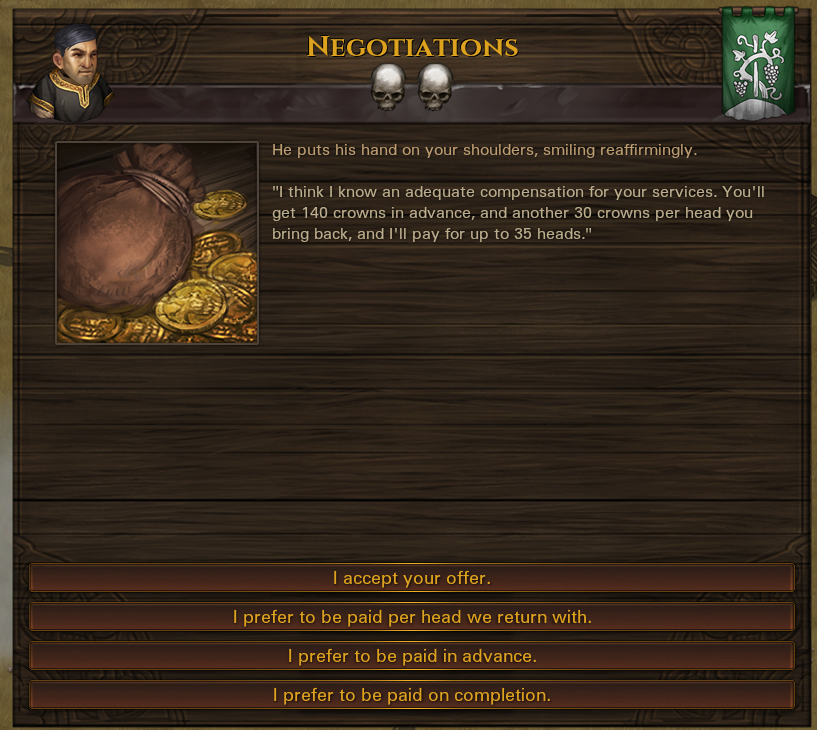 Contract negotiations are now no longer about how much crowns you are to get, at least not directly, but about when and for what. There’s now a set amount of crowns per contract, depending on the type of contract, its difficulty, your renown and a small random factor. What you’re actually negotiating are payment modalities. What percentage is to be paid in advance? How much per head you return with and how much flat payment? Employers have their own thoughts on the matter, and you can ask them to pay out slices of the contract money in different ways. It’s no longer about getting a few crowns more or less in advance, it’s about whether you get half in advance or not. Sure you may not negotiate as often as before anymore, but if you do, it’ll be a much more deliberate action now.

Can we get direwolf? Like through some mission or something, that would be cool