This week we conclude our presentation of the ancient dead with the reimagined vampire and an entirely new opponent. If you haven’t read the first part yet, it’s recommended you do so here first. Otherwise, read on!

This week we conclude our presentation of the ancient dead with the reimagined vampire and an entirely new opponent. If you haven’t read the first part yet, it’s recommended you do so here first. Otherwise, read on!

As the ancient empire conquered most of the known world, so would foreign and remote lands turn into provinces. What was local custom or cult once, hidden away and not spoken of elsewhere, would suddenly find itself a part of the empire, and sometimes would creep deep into its very heart. From the blistering deserts of the south came a secretive cult that had its followers not worship fertility as they did in the capital, not strength, not humility and not compassion. They worshipped a perversion of death, the promise to transcend mortality, to exist beyond life and death, forever.

When you have nothing but misery, it’s easy to let go, to welcome the warm embrace of the gods that sets you free from all earthly burden and hardships. But it’s those that have everything on this earth, power and wealth, that cling to it at the end of their life, that clutch to it in desperation, that bargain, that curse, that would pay any price to stay. And it is those who would embrace not the gods, for their touch is not salvation for them, but whose touch would tear them away and apart from the earthly things they prize above all, the things that they have chosen to become. It is those who would forsake the gods and turn to the cult of death instead, that would die over and over again, and yet never leave this earth, forever bound to it, forever paying the price.

Whether an ardent cultist once, or a decadent noble seeking eternal life, they have long since become a being that measures time no longer in years but in lifetimes: a Necrosavant. It will wither away and die in time, again and again, but never leave this world as long as it is rejuvenated with the blood of the living.

Mechanically, the Necrosavant is more or less identical to the Withered Vampire it replaces. The new visuals, however, tell a story on their own, and better reflect how this being exists. The less hitpoints a Necrosavant has, the more it will visually wither away, and the more hitpoints it gains again by savouring a victim’s blood, the more it will rejuvenate until its appearance is almost that of a healthy human.

The Necrosavant retains the ability to turn into a flock of bats to quickly position itself on the battlefield, making it perhaps the most mobile opponent in Battle Brothers. However, it doesn’t wear any armor or shield, leaving it vulnerable to being attacked itself, especially if bereft of its major strength by being stunned or immobilized.

The empire had countless religions and cults, and each had priests spreading the word of their gods, performing rites and proclaiming miracles. The ancient priest was one such individual once. Now brought back to unlife, his very existence is making a mockery out of his faith. His work is turned into a perversion of what he once devoted his life to; no longer does he bless acres, he brings foulness and rot, and no longer does he bring comfort, he brings but horrible visions of a world beyond ours.

The ancient priest joins the ranks of the few spellcasters in Battle Brothers, and like all spellcasters fills a support role. He’s of little danger all by himself, but with ancient legionnaires holding the ranks, he can slowly work to rout a whole company. And then, there’s always his ancient honor guard protecting him. 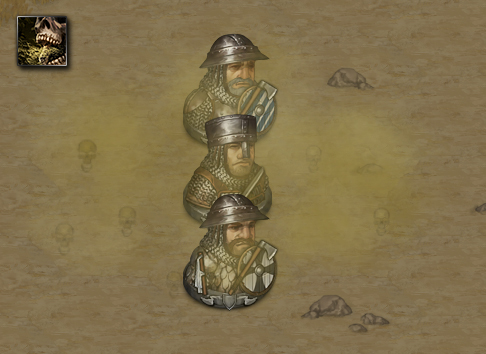 The ancient priest’s first skill is to summon miasma, a thick mist of foulness and rot that is harmful to any living being. Miasma is created in an area of 7 tiles and sticks to these tiles for several rounds. Any living being ending its turn on a tile affected by miasma will lose hitpoints - it’s only a few each round, but no armor does protect against breathing in the foul fog, and it does eventually add up if you don’t move out your men. 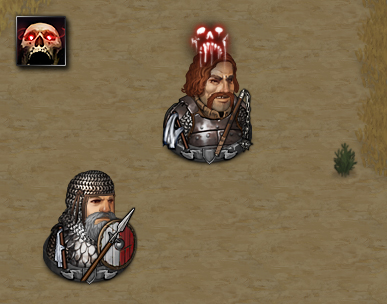 The ancient priest’s second skill is called ‘Horror’, and as the name implies, it brings horrific visions to it’s unfortunate victims. It’s an area-of-effect spell, like ‘Miasma’, but targeted at people and not tiles. Anyone affected will have to make a morale check - the higher the resolve, the higher the chance that they won’t be affected at all. If a character fails the morale check, their morale will drop by one level. Additionally, if the character fails critically (meaning with a dice throw higher than 140% of their resolve, subject to change) they’ll be affected by the new ‘Horrified’ status effect for one turn and be unable to act.

While ‘Horror’ can be quite powerful against a company of weak-willed and deserters, it can be countered by investing into the resolve attribute of your men, picking certain perks, and making use of the ‘Rally the Troops’ skill. As mentioned last time, the ancient dead are the missing puzzle piece to make the resolve attribute worth investing into, and together with some general rebalancing, also to make morale management in battle a more interesting and active part of gameplay.