In this blog, we share a bit of the back-story about our game's development history. We talk about our amateuristic game design approach, a bit about our experience on going to PAX11, a surprise visit from Kotaku at our booth, and some of our strategy moving forward on making this game better.

Posted by knightSquared on Oct 4th, 2012

I just want to share a bit more about our development process. I have sense that you guys want to try out some demos and see some development in action, and that's coming soon! But I thought it would be nice if we share a bit of that back story before we begin all that fun stuff.

So it's been an interesting challenge for me personally as the game designer, starting with this game as a total amateur on game design, but coming from the professional industry as a programmer. It seemed cool at first to try to get as many ideas into a game as possible. Whatever the team thought was cool to add, we’d do our best to add it in. Like making it bigger, then better, and then adding more and more and more. So how do we make sure that a game is fun? By adding more enemies! By adding more mechanics! By adding more stuff. And make it bigger! But eventually you'll just learn that it's just adding more of the same, and you learn that it often doesn't work well that way, especially when your team is composed of totally different types of gamers. If not done right, adding more can often either dilute or complicate the key experiences of the game. 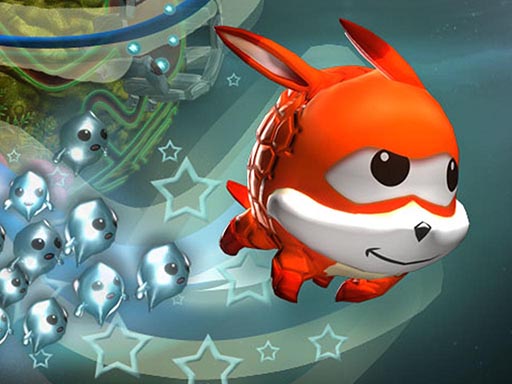 So here's Armillo. It started out that way. First as a simple 2D iOS type puzzle game where you rotate your play field and navigate a ball around a maze with various different game play obstacles. How about make this 3D instead? Okay then, so if we're making this game 3D then let's make it a console game where it's composed of large 3D worlds. Okay, so now we’ve made these large 3D worlds, let's then enhance this console experience by creating a fuzzy cute character. And we love shooting games, so let's add a shooting element. Alright.. so something is missing - I know! Let's make these critters that follow this fuzzy character that needs to be saved, never mind that it's the main game play that doesn’t feel right. ... Hrm .. something is still not right. Let's add a combo meter so that it'll be something on the side to distract you while you play this game. Maybe that will be fun. And on and on and on...

So as you can see, this game was designed with a very amateuristic design principle - If it's cool, let's add it in. (note that I’m not discrediting this design style.. it just didn’t work for us, but I’m sure fun things can come out of it!) So in a way, we’ve found that it just drained our resources as we just kept adding more and more stuff, but also finding that it wasn’t adding much to the fun. And now that I think of it, a good design strategy is to first create an amazing, engaging experience and then build around that. So instead of trying to combine a whole bunch of mechanics together and hope that it'll all produce something cool, it’s better to focus on producing something cool then build around that. 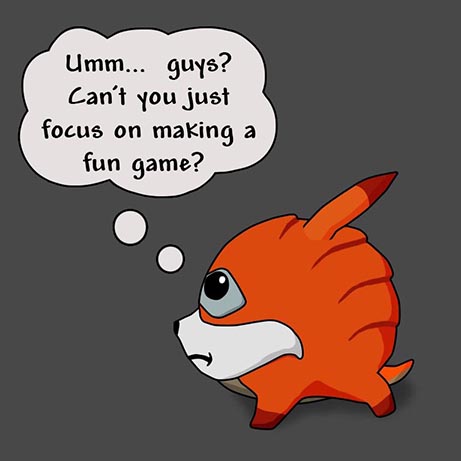 But it's not to say that this game is awful. In fact, we showcased our game at PAX11, and who were to show up at our booth but none other than Stephen Totilo of Kotaku. He wrote a pretty glowing preview of our game:

Kotaku.com (You can go there also for an interview of both me and Ron - our 3D artist who worked on nearly all the models of this game)

"So I sat down to play Armillo, not mentioning where I was from. I ran the game's title character around a spherical world, dashed with one button, jumped with the other. I started thinking about Sonic controls and Super Mario Galaxy level design (Sonic Adventure 2 had spherical worlds before Galaxy, some Sega fan is yelling at me now). As I played, someone else behind me said they saw some Bomberman in this game, too. The whole thing felt like a throwback, even when I—surprise—found a machine gun for my armadillo to briefly use, twin-stick-shooter-style against enemies.

I had enough fun that, after a couple of minutes, I dropped the veil of anonymity. I told the Fuzzy Wuzzy guys I was from Kotaku and needed to show our readers the game. So we filmed it, with two of the developers explaining the action. You see a little bit of two levels of the game. What you don't see is a two-player mode which I ran out of time to check out." - Kotaku

Plus the majority of the people who played our game demo at PAX11 signed up for future updates, and feedback was overwhelmingly positive. So we would put this game on a ‘decent’, but not on a ‘good’ level - at least in our minds. At the same time you may also feel free to call this game awful - we don’t mind - really! We might shed a tear and throw some chairs, but it’ll be fine!

(Just a note that we mentioned to Kotaku that we'll finish this in 6 months, but we decided later on not to and just worked on making this game until we're happy with it) 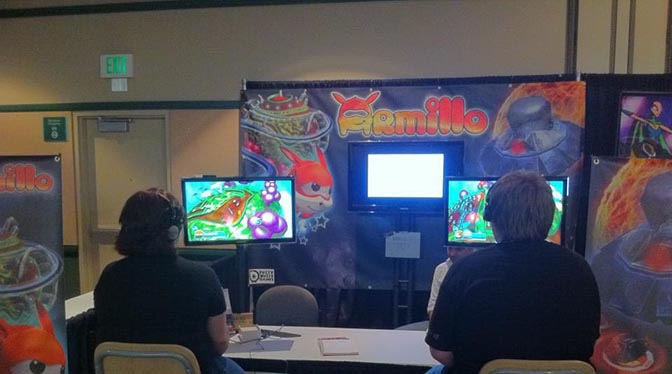 But yet, this game can become so much more. Our next step is for us to post a two level demo of our current progress so that it'll hopefully be that much more exciting to follow us in our development. We’re also thinking of making this the only demo until after where we implement all our changes that we're thinking of. That way, you get to play the before and after build, but we’re flexible so we might change this strategy based on community feedback. We would also love to hear your feedback on whether you agree or disagree with our changes and assessment. Constructive negative feedback means more than positive feedback to us as it’ll only help us make the game better, unless the negative feedback consists of just two words (but one word is fine!)

We’re also not going to be revamping the game top to bottom, which will be a waste of time. Instead, we’ll be focusing on what doesn’t work and re-focus them. We’ll be working on game progression, level design, visuals, game play elements, game stats, and more. This will also mean that we might be scrapping some of the features that are present in the demo - and we really hope none of you guys will get too attached to them. (*prepares for onslaught of hate mail*)

But just a side note that one of the challenge right now is that we don’t have a 3D artist to help us out at the moment (note that this is not a plea for help), so our initial main improvements will focus primarily on the game design/level design/audio/tech art/2d art side of things. But once we’re all set on the 3D art side, we’ll start talking about that too.