Recently I've been working on improving the visuals of a couple different systems. The first was adding some fake Ambient Occlusion to my isometric engine.

Recently I've been working on improving the visuals of a couple different systems. The first was adding some fake Ambient Occlusion to my isometric engine.

It's amazing how much better things look with some shadows: 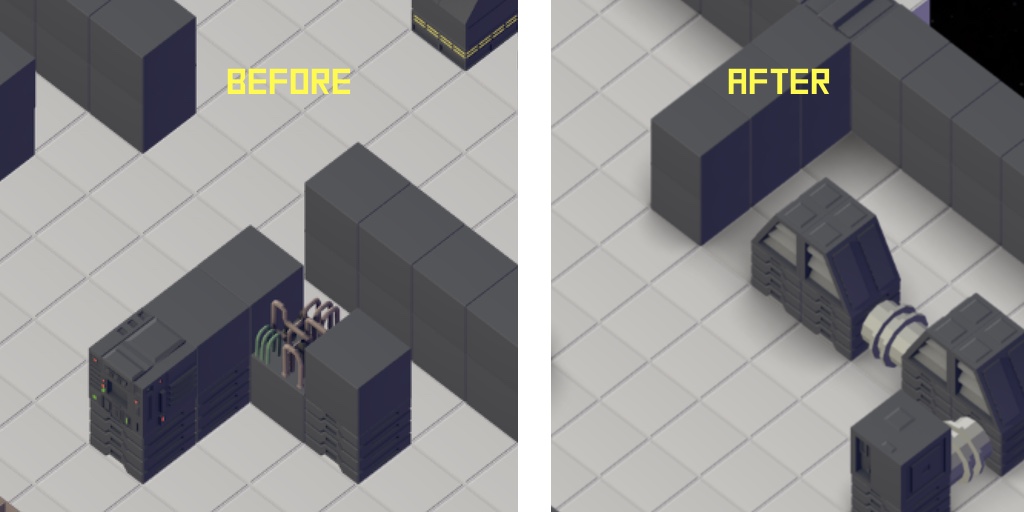 In addition to feeling much more real, the shadows should make it easier to see where the edges of the walls are, for placing your units.

It was a bit of a challenge figuring how to do this in a purely sprite based way, and involved me hand-rendering some 256 shadow tiles over the course of a few days, but I'm happy with the results so far. I could probably have cut down the number of shadow tiles drastically, and will be looking into optimizing that aspect soon.

I also started changing the way you land on starbases. Previously you could just fly up to them and you'd be in the 'store' interface. Now you land on them just like you land on a planet, where you pick a shuttle and crew to send over. I want to keep the feeling that you are always risking your crew and sending them into the unknown. Some seemingly innocent starbases may be dangerous. This way the player is always forced to make the same choice.

In order to make the starbase scenes look cool, I also revamped the scenery to have more 'proper' 3D calculations and have actual depth sorting.

This also makes the planet scenes look a bit better and the shuttle looks a little more realistic when it's landing, so it was worth spending the time to improve it.