I've been hard at work on "Wretched" lately, and it's about time that I share all that I've done so far!

First and foremost, thanks for taking the time to check this game out. "Wretched" is an upcoming adventure / horror indie game set in a semi-open sci-fi world. The gameplay will focus mainly on the exploration of big open areas and some puzzle solving / platforming sequences. It will not feature any jump scares and the horror elements will be applied through slow tension building, as well as a heavy reliance on an ethereal / surreal atmosphere.

The main focus on the development of the game so far has been the creation of its visual style. I chose to work with a minimalist / subtle sci-fi style and I'm going to stick with it til the release of the game, as I've been enjoying the way that it has turned out. Work on the first environment has already progressed considerably and the screenshots that best represent it can be found below. 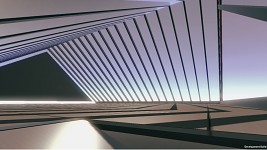 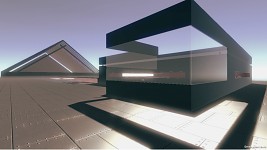 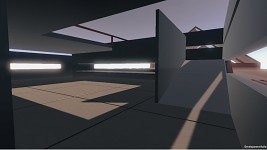 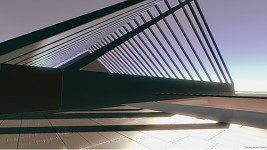 The second major advance on the game's development has happened in terms of the soundtrack. The track that will be used on the main menu has already been produced and can be heard on the link below. The rest of the OST will follow the same trip-hop / industrial style, altough the ambient music will have a more soft ethereal vibe to it.

Last but not least, I also had some time to work on the first scripts for the environment that's currently being developed for "Wretched". Below you can find a video showcasing some scripts working for doors (activated automatically or triggered by pressing a key) and an elevator.

A new dev blog will be uploaded as soon as considerable progress on the game's development happens. Cheers!