Development blog #004 for my upcoming game, Project Bullets. Here I'll show my new lighting engine, as well as some new characters, changes in the visual side, and a new audio engine. Also, a dev roadmap.

Hello everyone, time for a new update!
...and this one will be big

I've finally get rid of every bug, but there are no big changes since last update. I've started work in multi-control compatibility, but I'll get deeper into that later. I've been focusing elsewhere.

FINALLY I've fixed a bug that's been bugging me (no pun intended) for a long time, where the SFX volumes where brutally uneven (including classic mega loud machine gun bullets). I've wrote a custom sound engine within GMS so now I have total control for matching the gain of the different sounds while still allowing the player to lower or raise the master volume for the SFX independent from the Music master or the General master volume. So yeah, I'll accept some kudos. None? Oh, well.

[GRAPHICS]
And here comes the good.

Part 1: Parallax and outside backgrounds

One thing that really laid back the look from the game is that the background was actually on the same depth ast the scenary, so no parallax effect, and you could see outside the map and find out that it was actully printed in the middle of nowhere. So, first of all, I've implemented a parallax system (tho it's very buggy atm, because it reacts to camera zoom as well, which gives and undesired effect)

The other thing, as you can see, it's that the outside background is gone, now you'll only see pitch... dark... black. It looks way better this way.

Then, as you can see in the images... the blocky awful characters are gone.

Meet the two new fighters! Rhino is... well, the purple Rhino, and the other guy is Morth, but I'm pretty sure it'll just a place holder. I do love Rhino, though.
These were the work of a young peruvian artist, nicknamed @Blaner. He'll be doing more sprites for the game, as well as improving these ones.

Also, because of this, I had to create what I call the Dynamic Hands System (no, that's not a joke). Basically, it takes the main color from the character that's using a weapon, and then draws on top of this weapon two balls-like-hands, so the gun is not floating in the air anymore. These are just small detail but they help in the overall look.

And finally, the new lighting engine!

I wrote a lighting engine based on the amazing game Nuclear Throne, by Vlambeer. It creates an aura of light surronding the player, then another one less powerful but larger. It also uses the muzzleflash when shooting to create a quick powerful light. The nice thing about this is that it can be reactive to the map. If all lights are on then you'll only see a dim muzzleflash when shooting, but as the lights go off, the effect will grow stronger. I still couldn't make this to show, but I have a video showing the first test of the lighting engine.

I won't use it in every level, but it really helps to create an atmosphere.

And with that, this dev blog comes to an end.

Oh, I forgot about the new fire effects! 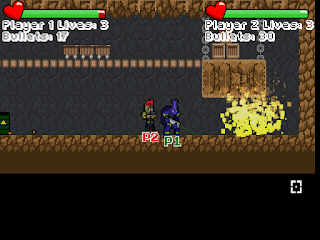 I would like to take a moment to discuss the roadmap. There is a list of features which I'll love to implement in the short term in order to release the alpha. Some things are harder, some things are more important, so I'll go in order.

Of course I'm not stopping there, I want to add things like unlockables, destructable enviroments, different games modes, and a big etc, but I want to aim there for the first release.

How will it be the first release?
Steam's Early Access. A paid and a demo version with limited functions (like no LAN or Online) so people can play a little of the game and, hopefully, like it enough to buy it.

When?
Somewhere between August and September. When it's polished enough.

Why Early Access?
I love doing this game. It's a really, REALLY hard work, but I just love programming and trying out new things to see what'll work and what will not. Problem is that it takes most of my time.
Currently, I'm unemployed, working freelance, but not making enough for a living (19 years old is not good for a CV, and my country is in the middle of an economical an political crisis), so this represents a problem. I'm hoping that, if I get to enough people, I can work on this game full time like now but without the fear of... kinda starving :P

So yeah, that's it for today. Kid A played twice while making this dev blog, so I kinda think that you're crazy... maybe... I will see you... on the next liiiiiiiiiiiifeeeeeeeeee....

Oh, snap out. Good night everyone!