New picture of the Light Puzzle, and details regarding other small modifications.

Just like I promised, there is a new method for hacking in DXSM: 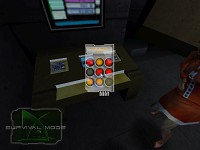 This should prove a far more formidible challenge to players whilst getting battered by undead hordes than the usual "look for multitool, wait, wait, wait some more... DONE!" style most players are used to.

In other news - there are some seemingly silly, but quite fun code developments,

and some important, and interesting code developments: