Story behind the game and details about Nevermore Game.

Nevermore is a hack n' slash game that features a little girl with an enormous knife that needs to gut as many children as possible within a timeframe.
She also has to collect enough blood with her teddy bear.

The bullies will try to hurt Anna and if they manage to hit her Mr. Huggles will drop some of the blood he is keeping as he gets squeezed.

The character is controlled with the keyboard in a 3d landscape.
Manoeuvring the avatar around in the schoolyard is done by running left, right, back and forth.
Furthermore Anna is able to jump and she has various moves that allow the player to kill their opponents in different ways.
Anna can also collect blood with the teddy bear by holding it above her head and stand under a stream of blood pouring from her victims abdominal.
Anna is small, fast and alone while the bullies are big, slow and has strength in numbers.

The camera will be placed behind Anna all the time and follow her through the game. The positioning will create a slight frog perspective so Anna's opponents will look even more intimidating.
In the top right corner of the screen there will be a picture of Mr. Huggles that will be soaked in more and more blood as Anna keeps on harvesting.
There will also be a timer that shows the player how much time he/she has got to fully soak the teddy bear.

Adult people with black sense of humour. To them it will be a funny game. Showing a little girl gutting children accompanied by Mr. Huggles's encouraging remarks just is funny.

But greater thought of these game, is to show the extreme way what can happen when someone is bullying today's children.

Anna is about 8 years old. She is immensely small for her age and she always carries around her teddy bear Mr. Huggles.
She is skinny of build and has white hair. She likes wearing dresses and having her hair put up with a red silk ribbon that she got from her grandma.
She also carries around a very big knife that is a bit longer that Anna herself. 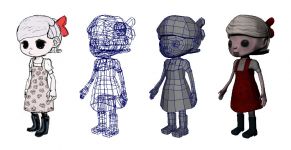 The bullies are big and stupid. They are evil and will try to hurt Anna and Mr. Huggles at any chance.
They are the only people in the schoolyard and they keep all the precious paint.
The Bullies will have different death animations, because of ragdoll, and will therefore also have different ways of spilling blood.
This makes it difficult for Anna to collect blood. 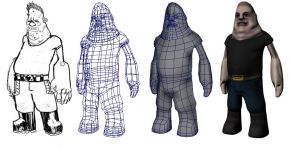 Anna's teddy bear who (at least in Annas mind) has the ability to talk and does so in a lavish quantum.
Mr. Huggles is full of ideas that very often has killings of other people as a main theme.
Anna got Mr. Huggles from her big sister who got insane and committed suicide. Before doing so she made some nice contributions to the looks of Mr. Huggles. For instance she put some neat stitches in front of the mouth of him

the game is meh, fun for a little while, but it looks cool and disturbing :D

love the idea. So twisted its awesome

I really like the idea and the concept. But what really ruined it for me was that I could hardly collect any blood, I didn't have the best FPS though. Still, nice game guys!

Collecting blood was quite fiddly.

This is an AMAZING game!! Excellent concept,a serious issue is addressed in a fun way, and I think it's great that it is a bit twisted, it is only reflecting what twisted world we are living in..I love the graphic, it's really cool and a bit goth :) I will recommend this one to everyone I know!! One of the best indie games in a while!!

the game is great! also black humor is the best.
had great time playing it.

Kinda creepy, but was fun to play

A pun that hasnt been useed since the release of Brain Bread.

Amen. Adispalic would get bombed.

That being said, the Nevermore needs more gore. For a sick and twisted game though, it fits the bill very nicely. Hope to see more from you guys! :]

Hahaha, great video.. These little girls and their dolls, so creepy, I've seen some animations in youtube about the same subject

This game is way too hard

i am downloading your game now!! i like your stile!

Completely and Utterly Psychopathic I LOVE IT!

lmao you got that right its one f*ked up game that for sure...

Jesus Christ... If this game is 'funny' then the next 'funny' game will be 'Do as many aborts as you can.".

i agree with lowlife this aint funny.

LOL @ people who are taking this game to seriously. I really liked the game. For some reason it was reminding me a lot about Psychonauts. Everything was pretty good except for the meh camera. Please make more installments.

Maybe it's time the gaming community grew up and took some responsibility for the **** being made, rather than wallowing in it like a bunch of pre-pubescent coprophiliacs.

Reason fail. You obviously don't understand the function of satire, a couple of components of which are irony and the intent to expose a hidden or neglected truth.

The player is actively butchering children for entertainment value. There's no expression of irony, in this game you butcher children and are rewarded.

I don't know what's sicker, the game or trying to justify being entertained by the video-vicarious act of slashing the throats of tots.

I personally found it an amusing take on all the recent schoolyard shootings and violence.

In this, you go around with a highly improbable weapon, having no higher motives aside from being commanded by a teddy bear of all things. I doubt that anyone, aside from the really queasy could take this seriously.

Most of you supporting this game are privileged, perpetually pre-pubescent soft, sheltered white subarbanites who will never encounter violence outside being the victim of an occasional wedgie. But in real life real violence isn't a game and supporting this or playing GTA IV, etc., isn't going to convince anyone that you're hard.

It just speaks volumes about the herd mentality here at moddb.com.

Btw, "innocent" school girl with vicious teddy bear sidekick... it's been done before.

utterly imbecilic and unnecessary. this is the reason why games are continually under fire...because of unoriginal, contrived morbidness in games/mods like this.

come back when you're ready to do actual gameplay instead of highly stylized nonsense.

really, either your one sarcastic son of a bitch or your a complete idiot.

I've changed my mind, I've played the game and it's fantastic! I mean after all, it is just a game. But I agree with a lot of the others about there not being enough gore. I know this guy from chat who has copies of the security tapes from Columbine, the quality isn't that good, but you can make out sounds of the children begging for their lives. You could make that the sound of the kids being butchered and it would fit in with theme of "show(ing) the extreme way what can happen when someone is bullying today's children."

The controls could use some work. Can't you make it so that you can use the mouse. Having to hit one bully 4 times to kill them isnt mych fun when there's a few more near.

I must be honest: I'm in love with the concept but I can't say I'm loving the game too.

If that's just a starting point, then I wish you best luck developing the game and polishing it. Otherwise it looks ike a wasted chance to make a cool indie game.

it looks pretty evil, but funny-'ish'

Awesome, fun, entertaining, and best of all: It ran totally smooth on my old ***-laptop!^^

Try to see these help pictures: