Explaining the Power Grid mechanic and a bit about building structures in general.

***If confused, check the previous articles from our blog*** 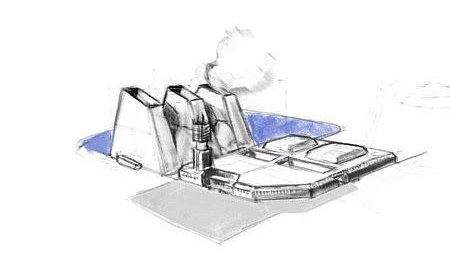 Hello, hello, hello! Sasu here again, filling the space for our team leader Niklas, who's still on his Nordic Game trip. Hopefully, we'll see him back healthy next Monday. Adding to that, our programmers have been working hard on planning and design this week, so actual progress has been a bit slow. Soon, we'll be back on full gear!

Meanwhile, I've been coming up with different systems for the poor, unsuspecting coders to implement. This week's subject may become quite a dominating feature in the game; The Power Grid system is something to consider when developing your planet's infrastructure.

Power can be considered as your action points. Almost any action, from building to shooting your weapons, takes a bit of Power. The more Power all of your Plants generate, the more actions you may pull off each turn. 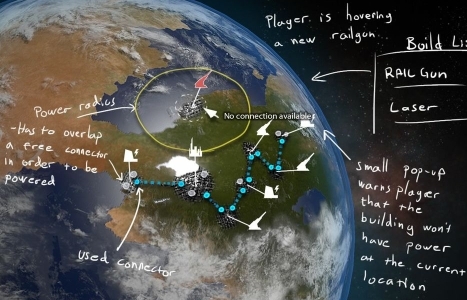 Structures can be built all over the planet, but the most efficient way of gathering Power is forming one, continuous Power Grid by building them close to each other. Every structure has some amount of Power Connectors: simpler ones have two, while others may have as many as four. When you've placed a new building on the planet, its Connectors attach to other nearby structures, if they are within range. As long as all the buildings are part of a grid with at least one Power Plant, they will function properly and stay online.

It is also possible to make several grids, not connected to each other, but there are some drawbacks to this strategy: the more Power Grids you have, the less efficiently you can actually use the Power generated by the Plants. You will receive less usable Power from two grids with two Power Plants each than one grid with only three Plants, for example. This gives the opponent an incentive to try and bomb your grids into pieces. After a massive attack, you may find your one big grid turned into three small ones and some structures orphaned and offline, without a Power Plant in their grid.

Now you're playing with power! This system is presently being tweaked, but the main idea should stay. It adds a nice layer of depth, especially when mixed with some other systems we're working on at the moment. You'll have to wait until some other time to hear about those.