The Egyptian fields across which Jack and Leila trudge during the night proved to be quite a challenge for our level designers.

As level designers, we are used to working with a variety of game mechanics when it comes to crafting an engaging gameplay experience. In action-adventure games, we often create combat encounters with varied enemies, interesting platforming obstacle courses, and challenging puzzles. But what do we do when all the gun-wielding, chasm-jumping, logic-challenging mechanics are dropped and all that's left are some story beats, atmosphere, very simple gunplay, and an animal to ride?

About halfway through Call of Osiris, there is a section that takes place in a wide open field. There's no platforming or puzzles here, just a peaceful ride on a tame animal, sightseeing, character development, and the occasional baddie to take out. That's a far cry from the bulk of the game. It was certainly a challenge for our design team: how to create a compelling experience from these simple building blocks?

It was clear from the start that this level would live or die on subtlety and atmosphere. Levels begin their lives as blockouts, a mesh of simple shapes that are just functional enough to be usable, with gameplay and player engagement at the forefront. We used the same design process for our levels, including this one, but since there's not much in the way of gameplay to speak of, the blockout only got us so far. After all, how can you test whether a level is atmospheric if all you have is a bunch of white boxes and cylinders? So the obvious thing to do was to break the established design process and go rogue. 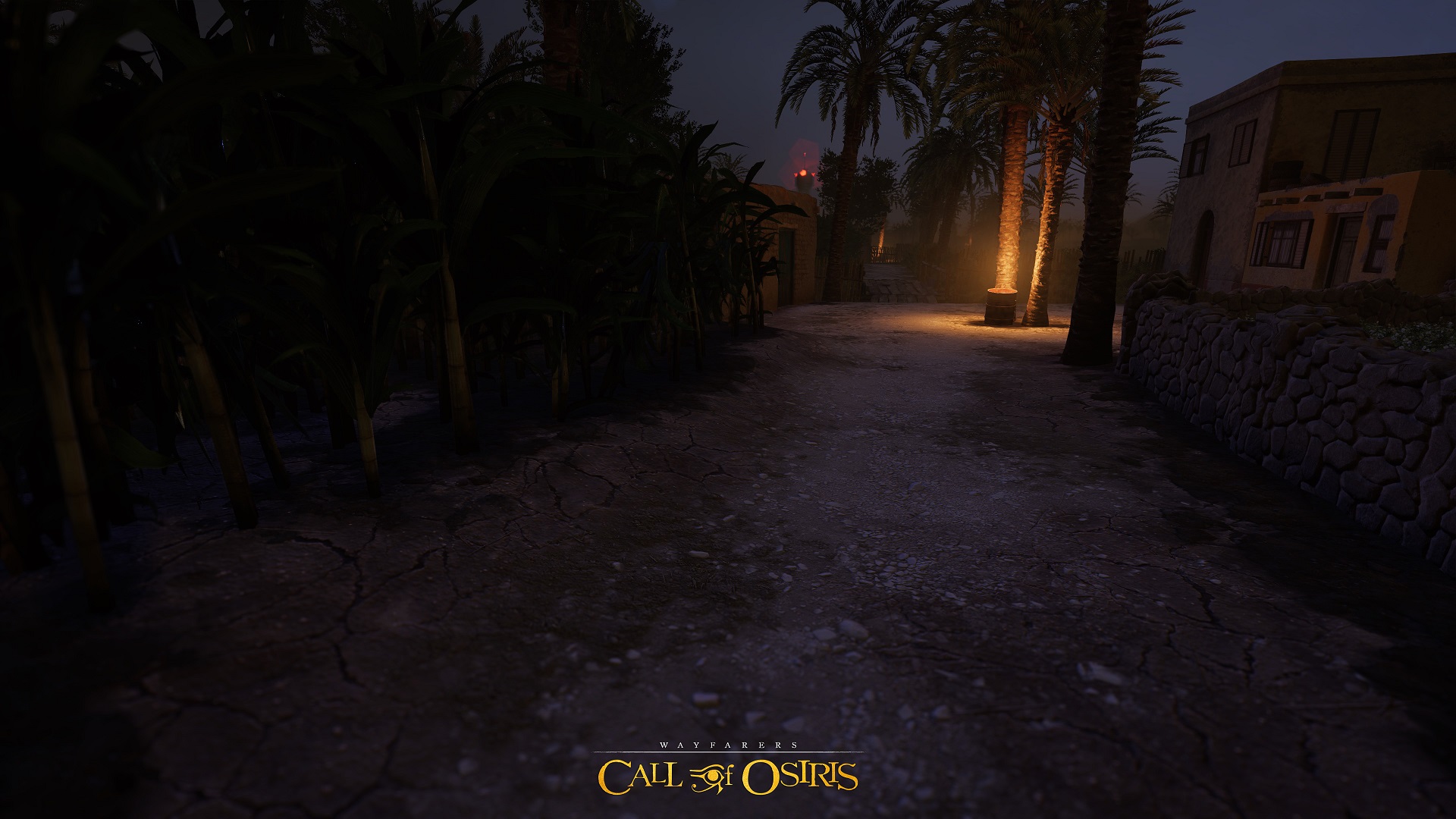 We started working with our 3D department at an earlier stage than usual. We created some basic vegetation meshes to better sell the location. We also swapped out the flat ground planes with Unity's terrain and painted it with some basic materials: wet soil, dry soil, dirt path, pebbles. We set up sections or zones where certain types of vegetation grew, added irrigation canals, simple mud and straw huts, bridges, and even some scattered houses. Tree lines helped players find their way around, and fires lit in steel barrels illuminated various sections of the fields to contrast with the night sky. Occasionally a monster would challenge the player, and players would find collectibles as rewards for exploration.

Originally, we wanted to allow the player to move almost freely around the fields with only a bright light in the distance as a fixed reference point. The idea behind this was that players could set their own pace and explore as much as they wanted, and if they wanted to go further, they would just walk towards the light. However, we quickly scrapped that idea. It proved difficult for players to navigate, and there were issues with backtracking and players going in circles and getting stuck in loops. Even with a prominent weenie, there were no real key spots in most of the level for players to properly orient themselves. Patches of vegetation soon became indistinguishable from one another, and the few man-made objects we had at our disposal weren't nearly enough to create memorable locations. Sections of high vegetation also obscured the weenie from certain angles, adding to the confusion, and the abrupt change of pace from previous chapters left the player thinking they were doing something wrong or that they had missed a crucial piece of information.

OK, lesson learned. Freedom can be overwhelming and putting complete control of pacing in the player’s hands is a bad idea. 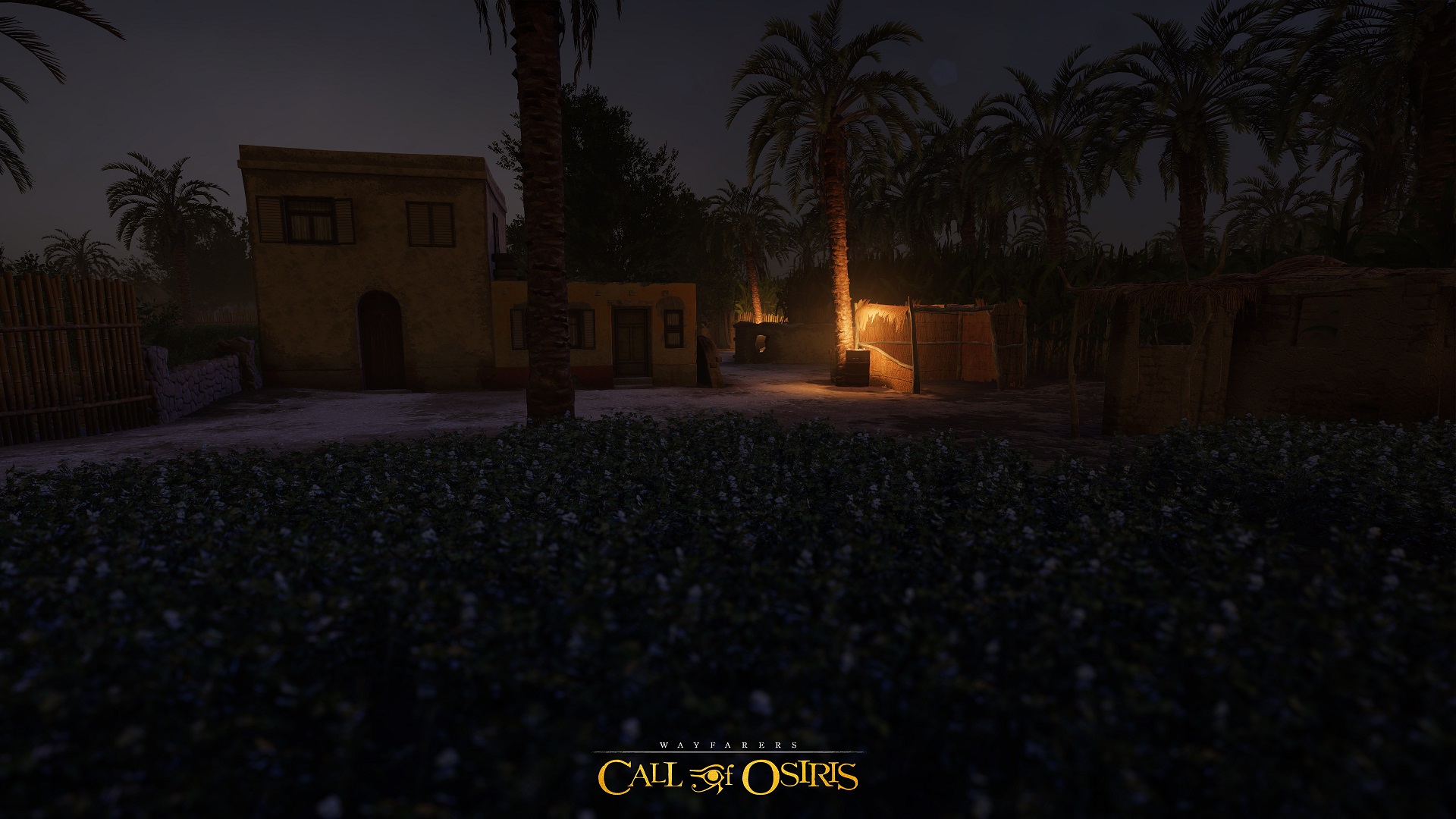 For the next major iteration we made the first fifth of the path linear, then branched it out into several different paths that the player could freely choose, and finally reconnected them into a single endpoint at the end of the level. To reduce the risk of backtracking or looping, we had to gate the player. While this option gave us more freedom to set up some interesting environmental and story bits, it also proved to be a problem because we couldn’t really gate the player effectively. We never knew if they were going to pass a certain point on foot or in the saddle. We didn’t want to create a situation where we would prevent backtracking and inadvertently deny a player the ability to return to their dismounted companion. Some players were also frustrated because instead of being able to fully explore all the different paths and collect all the goodies in one go, they now had to commit to one and try another in the next playthrough. Overall, this iteration was better than the first , but it still had its issues that were big enough to force us to return to the drawing table.

Since we couldn't let the player roam completely free, and we couldn't find a way to gate the player that didn't feel forced or separate them from their brave steed against their will, we decided to split the entire level into two different sections: the riding section and the shooting section.

Solution: The first half

We moved all story and character beats to the first half of the fields, removed the option to dismount, and moved all collectibles and combat to the second half. The best parts of the previously divergent paths were combined into a single linear path, with the intention of masking it so that our players wouldn’t realize we're funneling down a corridor. Ultimately, we wanted our players to be pulled forward by the environment, not pushed by the game. 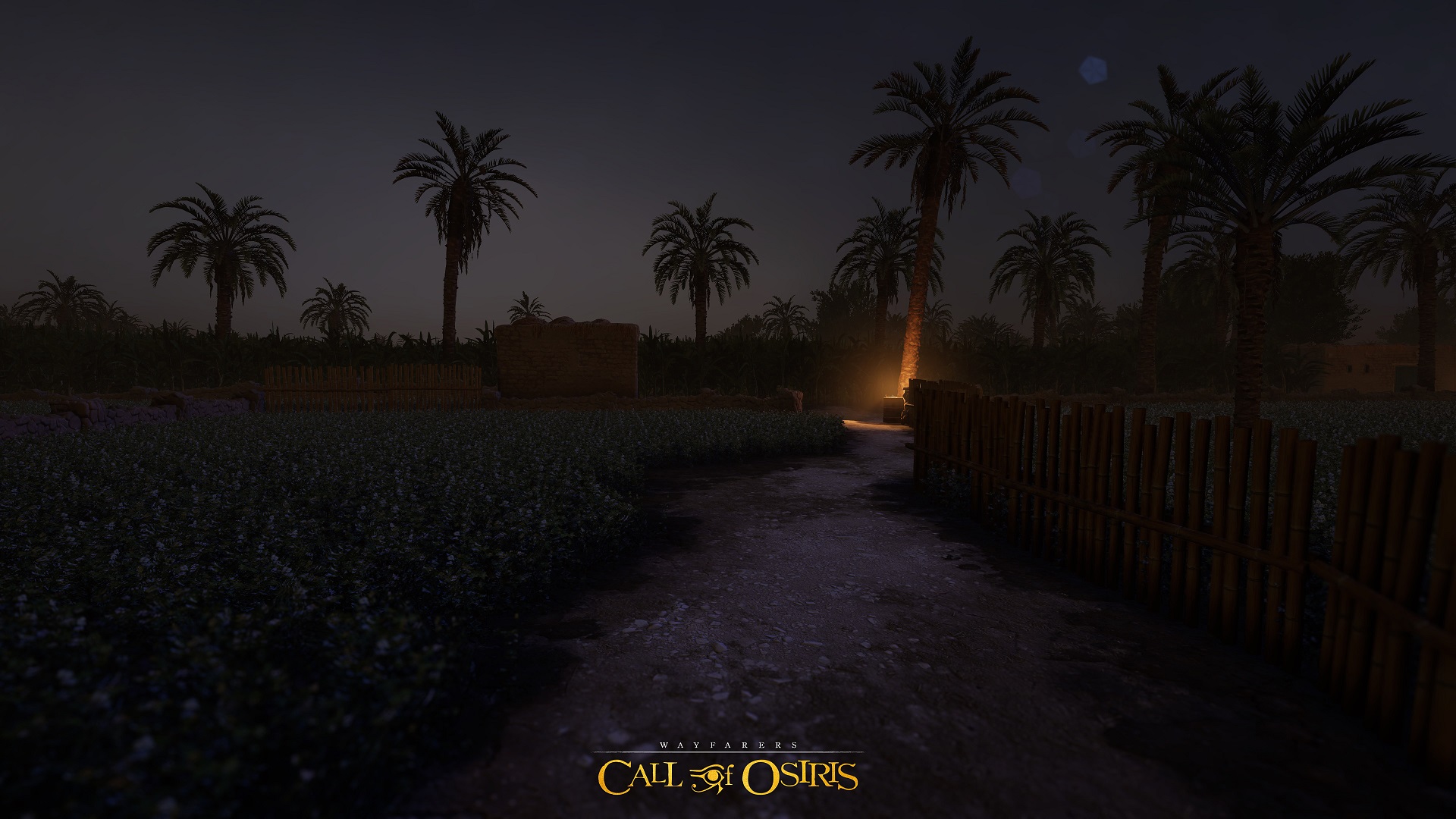 For the first half, we divided the path into several distinct sections, each with its own predominant type of vegetation and structures alternating in width across the path, with a few open sections in between to give the player a breather. Care was taken not to make the path monotonous, incorporating just enough horizontal rotation to force players to scan the horizon and subconsciously digest everything in their path. We quickly realized that if the panorama is diverse enough, it can serve as a great distraction for long, slow beats. Another key factor in guiding the player was lighting. We used fires in steel drums with the added combination of very tall palm trees to guide the way. Since the palm trees are by far the tallest objects in this level, their trunks were perfect for "painting" them with lights and making them easily seen from a distance. We made sure that players could always see the nearest light to keep them oriented.

One potential pitfall with this type of signposting was if the player could see more than one lit palm at a time. Instead of gently drawing them forward, it would quickly become a progress indicator. We avoided this by adding twists and turns where needed and using Unity Light's FadeDistance option to gently fade the lights in and out. 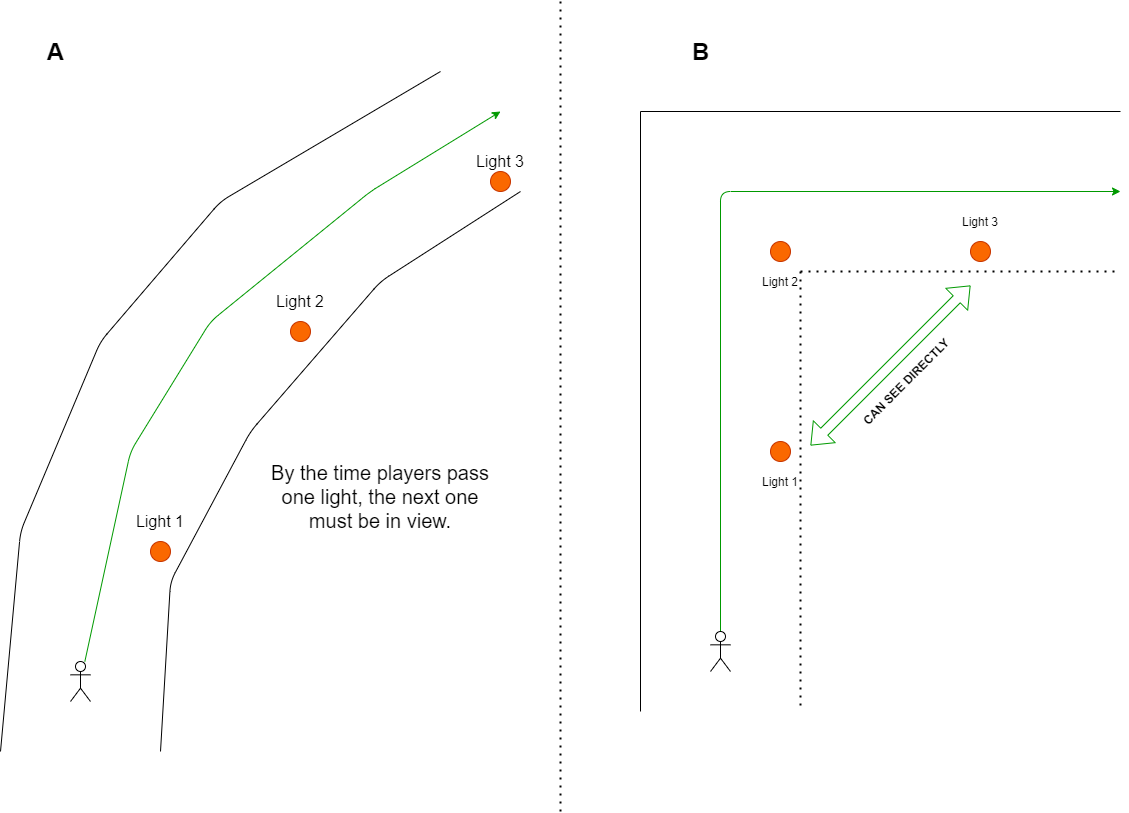 If players could see light 3 from light 1's position, this invalidated light 2's placement. Instead of following the path, players would try to find the shortest direct path to light 3, especially if the path from 2 to 3 was long. This could lead to frustration (example B).

One of the techniques we used to counter this was called "path foreshadowing" (example C). We used fences or dense vegetation to obscure the view between non-consecutive light sources. At bends, we positioned the lights so that they fell into the player's field of view before they had completely passed a corner. In the example below, players can see light 1 and catch a glimpse of light 2 through the breaks in the fence. We also moved light 3 from its original position so that it falls into the player's field of view before they have completely left the corner. And of course, we've made sure that the right side of the path is dense enough to hide Light 3 from Light 1's position. 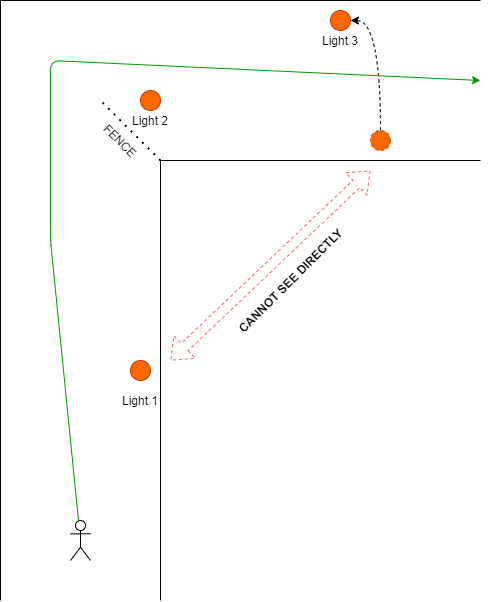 We've also added some navigational puzzles in the wider areas, giving observant players a chance to stray just enough off the beaten path to reward them for their dedication, rather than just blindly following the established rules.

Solution: The second half

For the second part of the level, we omit riding completely and focus on exploring on foot and shooting. We added more mud houses to add visual variety, and used lights again to guide the player. We added fake lights to accentuate the edges of doorways, used reflections in the water, and used camera framing to our advantage as much as possible. 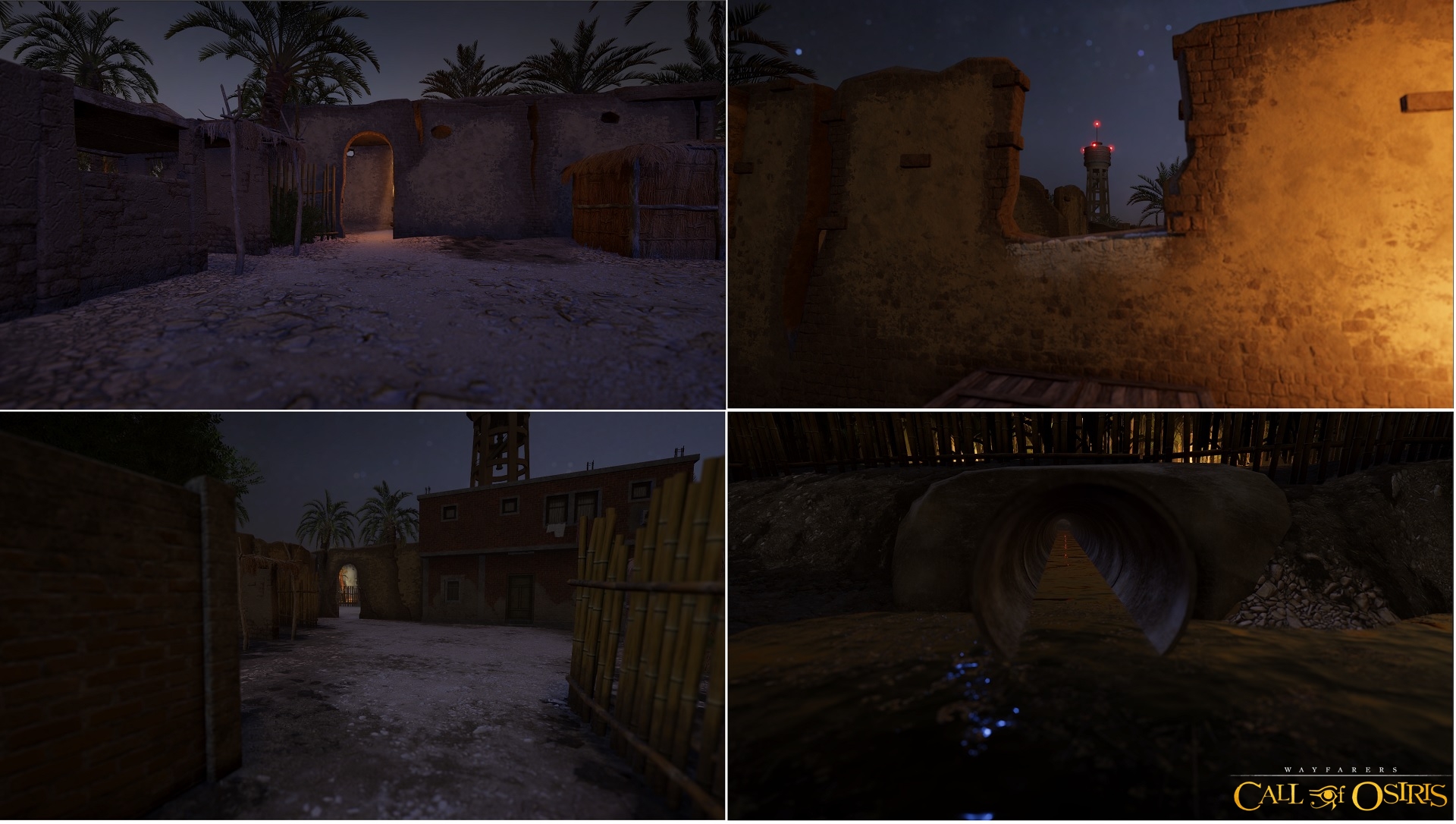 We also completely redesigned our weenie by turning it into a tall water tower with warning lights at the top, similar to the lights on windmill turbines that warn the airplanes. This made it much less obtrusive in the overall aesthetic of the level, and also made it fit in better with the environment. The distinct change in game dynamics from the animal riding part to the shooting part also served to give the level more character and make it a memorable part of the overall experience. 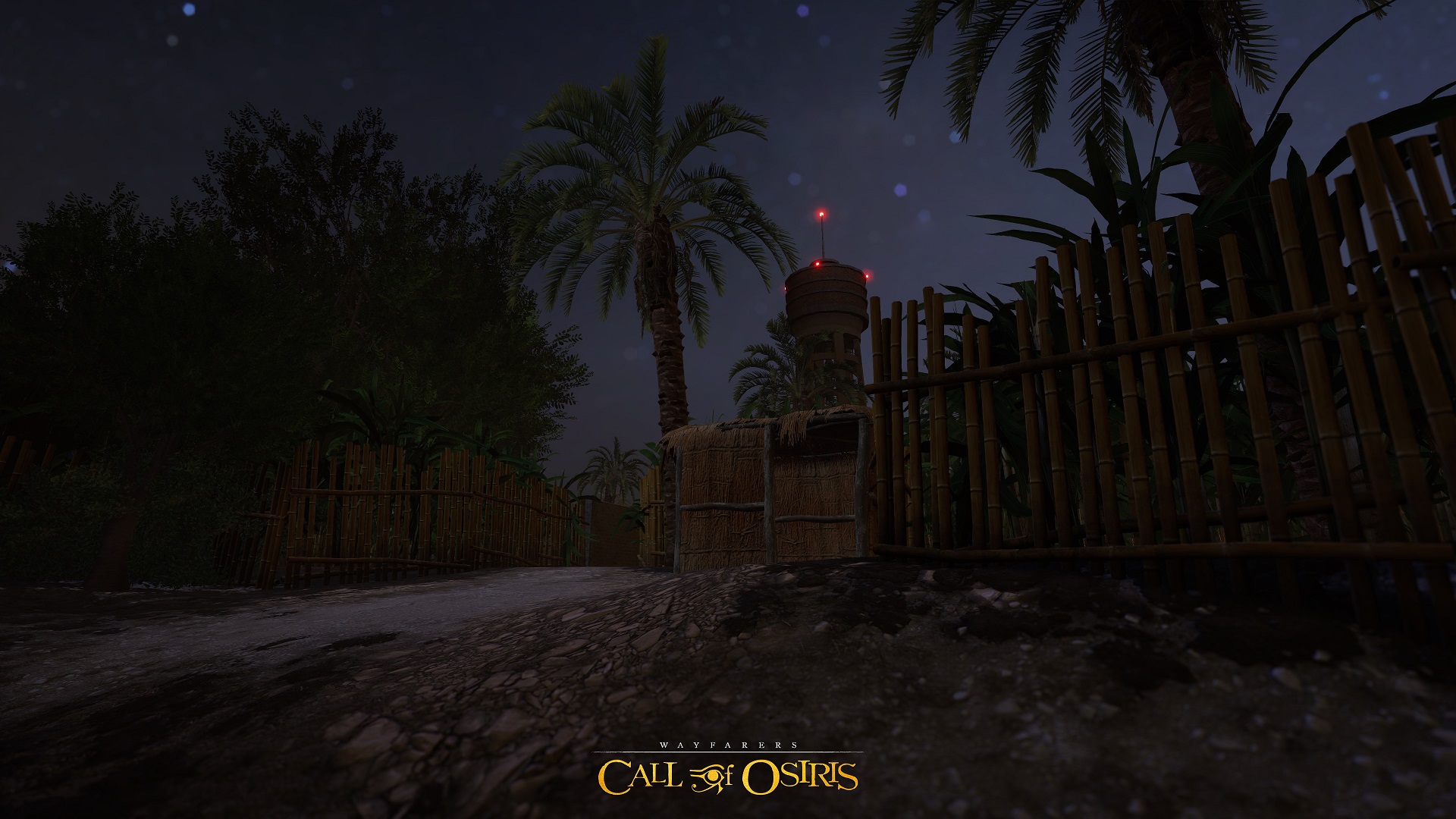 It took many iterations and failed attempts, but what started out as a flat slab of terrain, with the player at one end, the objective at the other, and nothing but vegetation in between, was gradually transformed into an atmospheric, slow, and intimate section of the game, built on the story of the world and the conflict between the game's characters.