The first demo of Legends of Pixelia is nearly finished and I hereby announce, that it will be playable during the next week. I'm preparing an IndieGoGo and a Steam Greenlight campaign that will start next week, too. ETA: February 17th.

Hey there! The first demo of Legends of Pixelia is nearly finished and I hereby announce, that it will be playable during the next week. I'm preparing an IndieGoGo and a Steam Greenlight campaign that will start next week, too.
ETA: February 17th.

Today I'll tell you about the recent development of Legends of Pixelia.

The demo will contain the first and the second dungeon, music and sound effects are ready and working. Sebastian Stern really did a great job with the soundtrack, you can preview the "Boss Theme" in the current demo video:

Check out the demo, that will be released next week, to listen to the menu's theme and two of the dungeon themes.

For those of you who seek a challenge, you are now able to create hardcore heroes. They stay dead, once they die.

To make a hero hardcore, check the box in the hero creation screen.

Even an early demo should have an options menu. Change your keyboard controls, music and audio volume or the resolution.

Legends of Pixelia has a small "how to play" section that can be opened from the main menu.

This sould give everyone an idea of how Legends of Pixelia works.

The IndieGoGo funding campaign will start next week. As you are reading this, you are one of the first people who know about Legends of Pixelia. This project really needs your help. So check in early next week, get the "Early Bird" perks and be part of a cool retro styled game project. :-)

Here's the preview of a new hero class. You will get more info about it next week:

Other ways to help

Don't have the money to support Legends of Pixelia, but still want to help? 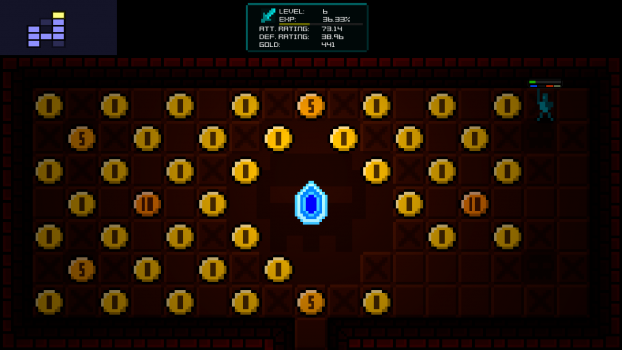 The Steam Greenlight campaign will start next week, too. Every vote is important. Also, sharing the campaigns' links once they started would be a great help!

I'm very excited about next week's events. Come back February 17th, play the demo and help Legends of Pixelia.
Thanks to all of you in advance! :-)