Work on SMOD: Tactical Delta 6 continues, With many new features being implemented and tweaks made to almost every aspect of the mod. And we have much bigger news coming very soon!

While it has been some time since our last update on Mod DB, Work on SMOD: Tactical Delta 6 continues with many new features being implemented and tweaks made to almost every aspect of the mod. And we have much bigger news coming very soon! 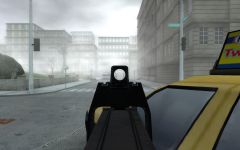 Perhaps the biggest feature we have is the new Bandaging System. Instead of the typical Health Regeneration or Health Items that other First Person Shooters use, SMOD: Tactical Delta 6 requires manual treatment of wounds.

Treating wounds in-game is a quick, simple process that adds depth to the tactical combat SMOD: Tactical promotes. When you press the appropriate key, You will lower your weapon and automatically start the process. During this time your health will be displayed to you to accurately gauge how wounded you are. You cannot shoot at this time and you will move slower during the treatment but it can be canceled at any time should a threat present itself to you during it. You can do this an unlimited amount of times and bandaging is not limited by items in your inventory.

Combat is being rebalanced around this new form of healing. Expect enemies to be less in number but each hit you take is more meaningful. You have to decide if you can last for the duration of the fight or retreat to heal. Half-Life 2 campaign fans need not worry; the bandaging mechanic is balanced to it's gameplay too. 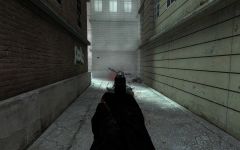 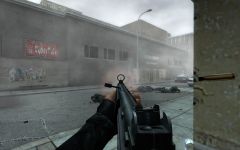 In the above screenshots you can see one of several new community maps Delta 6 is adding. This one being dotd_crookcounty. As well as the G3A3 (community-made model), One of many new weapons Delta 6 adds.

Many changes have been made to the sound and graphical effects. Including highly improved muzzle flashes and sounds with "distant" effects for NPC gunfire as in Half-Life 2. Many bugs from minor to major have and continue to be fixed to the best of our capabilities. We hope that you will find Delta 6 to be our most polished release to-date.

Check back next week for more. As we have a massive media release planned including new gameplay footage!

G3 looks great, too! it is great that SMOD:T is starting to include most of the real worlds common weapons in its arsenal!

Could you please port this to the orange box engine?

Exactly, and if you *#$heads STILL Didn't read the @#*in' thing, the SOURCE IS NOT BEING RELEASED BY THE AUTHOR SO NO IT CANNOT BE PORTED WITHOUT THE ORIGINAL CODE.

You can play the orange box engine mods with just hl2

You can still play mods based on the Orange Box engine even if you don't own any Orange Box games. Even L4D will allow you to play Ep1 and Ep2 mods.

orange box engine, as in EP 2 engine right? (technically its updated version of source engine but what ev) just wanna make sure because what you said is true then i'll be able to play resistance and liberation
:D

Lol dude, The OBOX is so cheap so why dont u get it?

I agree, it should be on the orange box engine

Well what about who DOSENT ****** HAVE THE ORANGE BOX DICKHEAD

You would still have 5.56 to play with, you really should get ep1 and 2. (Also yes I realize that the author isn't releasing source code)

lol what about the people who arn't being little girls using big bad words,
Take a chill pill man i would hope you don't talk to people like that in real life.

coop would be bette news, but at least it's gonna be updated. good luck.

This crap is still going? Christ.

ess tee eff you brah! this mod is friggin awesome! Chill! Its bether than you could ever done anyways!

No it really isn't pal and don't talk like a carrot in your mouth.

That's pretty immature of you. Nothing about this is crap. Obviously they are taking design into consideration as to avoid the cookie cutter FPS model. The maps and details are absolutely fantastic and promote the tactical feel. Good job, don't listen to fools.

Shouldn't you be playing Halo P5ych0?

Right, so using someone elses work is such great talent right? And just because some chinese kid can wrap a few convars around a various amount of functions is NOT skill at all. Don't listen to you more like.

He could probably keep a mod around longer then you can. Your whole team would leave you because your such a dickhead.

Because you totally know my team don't you? I don't honestly care if he can keep it around I'd rather see it banished from existence because it's a worthless piece of crap. ConVars, amazing!

Why do you say that?

Wow, this looks great! I thought SMOD died a long time ago. Good to see that I was wrong.
I just wish you'd add multiplayer support so you can coop with your friends.

Yes i tottally agree dude .
Especially for the zombie maps that were in the previous versions . :D
"bARRicades ftw"
Lol

THIS IS AWESOME . . . CO-OP OR Multiplayer for the zombie maps half of the mod would be tottal AWESOMENESS !!!!
Like . . . fareal

Totally awesome, guys. My expectations are really highly for this release :3

I believe these guys divided by 0, and came out with a solid number.

Could you make the hl2 campaign a little more possible

Is great to hear this update keep up the work

can you play this if you have counter strike source, team fortress 2, half life 2 deathmatch?

is it ep 2 engine on this now?

i too wish for the orangebox port. oh well. i'm willing to deal with slower loading times as long as delta 6 is nice is polished.

Omfg!
When I've seen this i feeling like a father seeing his lost son after years.
This is my favourite mod, but i really would like to see a co-op mode, after all, my friends and I wanna play together...
That would be cool, if in co-op, only someone else could bandage you.
And btw, please make a list with all the new weapons, because i can't wait to test them out like hell.
Freaking cool!

Anyway awesome, i thought it was the final version.

Oh my holy god - I have been waiting for this moment for years...well, maybe months - but still, I dreaded not ever seeing a new SMOD - it looks even better than ever before!

wait on the side they sayd they didnt make eny more updates or smod-t eny more ??? but stilll YEY A NEW smod t :D:D:D:D:D:D:D:D