SMOD: Tactical Delta 6 has made a media release. With several new screenshots and details about the next version.

First, The mod summary has been changed to more accurately reflect the current state of the mod and hopefully give much more accurate information to newer and older fans alike. 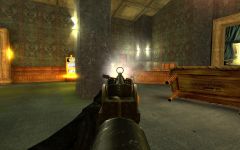 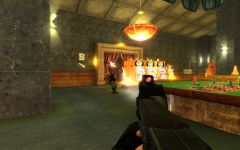 While Delta 6 may look and feel more like a tactical shooter then the versions before it, the ability for the user to customize the gameplay to their preference has not been neglected in the least. Delta 6 will be the first version of SMOD: Tactical to use The SMOD Menu System. The SMOD Menu System makes configuring SMOD's special settings more user-friendly and easier then before as well as offering even more options. You can change your settings right from the main menu without the need to load a map or use an external program, allowing most settings to be changed mid-game if wanted. The new community-made maps Delta 6 features will also be available in the chapters menu along with the Half-Life 2 campaign, eliminating the need to use the configuration map to access them. 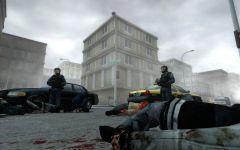 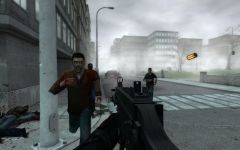 Zombie fans should also have something to enjoy in the new version. The zombie gameplay from Delta 5.56 have been greatly expanded on and Delta 6 will offer several new maps dedicated to zombie gameplay. Thanks to veteran_gamer of SMOD: Outbreak who has allowed me to use his enhancements, the Zombie2 NPC coded into SMOD but previously unattractive is now fully functional in-game and enhanced with special animations. They can run, jump and climb to reach the player in almost any location and have multiple customized attack animations. 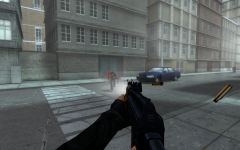 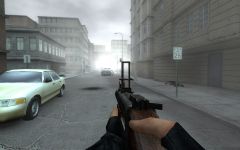 Above you can also see two new community-made weapons in Delta 6: The M79 Grenade Launcher and the AKS-74U. Both weapons help to add more variety to SMOD: Tactical's arsenal of real-world weapons as the selection of weapons continues to be re-arranged and added to. Expect to see more new weapons in future updates!

One thing i wish to make clear to our fans is that no-one on the SMOD: Tactical team, including myself, is in possession of the SMOD Source Code. SMOD: Tactical is only possible due to SMOD's flexible coding and vast amount of configuration offered by it. We will not be adding any support for the Half-Life 2 Episodes or Multiplayer gameplay in the foreseeable future as we are unable to implement full and stable support to them.

We do not have a release date set at this time, Although it is hoped that Delta 6 will release by the end of this year. We want to deliver the most polished release of SMOD: Tactical yet and want to have enough time to do so.

Excellent work guys, keep up the pace and I'll DL the latest version as soon as it's released.

Awesome I cant wait for the new zombies

Agreed. Also, would love to see Smod-Tactical on ep1 or ep2 engine. :>
Seen a mini mod, but it's just for Smod. :S

Super freaking awesome! Eventhough the fact that there won't be any Co-op is bad, the rest looks great.
I still got one question: Will the new menu also bring weapons option, with it? I couldn't open the console in the old versions, and so i always lacked on weapons, having mostly the same, through the whole game.

Outstanding. This will definitely be the best SMOD to date. The wait is already killing me :O.

Ahhh! I want it now. Good job though guys, You've got my Download for sure

This will really deserve a console port all together by Valve, as official DLC - it's just too good...

It was okay, for a bit, but not particulary looking forward to it anymore. Gets repetitive guys...

I was looking forward to a multiplayer co-op mode, which wouldve been awesome :[

Finally i have been waiting for a menu option for smod :3. Also custom maps in the campaign menu? WIN!

Keep up the good work. One of my favourite mods. The only way I've played HL2!

It been over a year. Where is it?